After 17 years, Clonard Rector takes a well-deserved break before taking up a new challenge 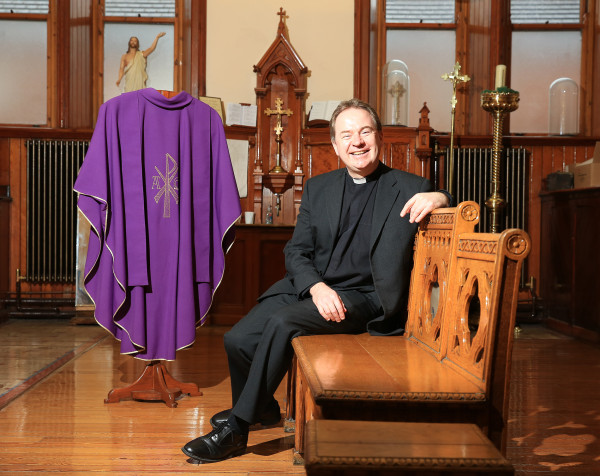 AT a time when the Catholic Church is struggling to cope with dwindling Mass attendance, a sharp fall in vocations and the fall-out from the child abuse scandal, the Clonard Novena is a remarkable and growing success.

Now one of the guiding lights behind the annual outpouring of community spirit is about to say his final Mass at the famous old church as he prepares to take up duties in another city.

The much-loved and highly respected Redemptorist, Fr Michael Murtagh, will say his final Mass on Sunday, April 19 before handing over his Rector duties to Newry priest Father Noel Kehoe.

Speaking to the Belfast Media Group, Fr Murtagh said he was looking forward to taking an eight-month break before moving to a new parish in Ballyfermot, Dublin.

“Well, as a priest you are due a sabbatical after so many years in the ministry to keep you fresh. I’ve been a priest 17 years and I’m only getting round to taking mine now,” he laughed.

“It feels like yesterday that I first arrived at Clonard in 1994,” said the Longford native. “It was a week before the ceasefire broke and you could say I was pretty nervous coming up as a student. The army was on the street. It does feel like yesterday. I was ordained a priest in 1997 and became Rector at Clonard in 2008. You can only serve two terms as Rector, like the President, so my second spell is coming to an end.”

Fr Murtagh spoke of how he has seen great change in the community and the parish over the years he’s spent here.

“Certainly the last number of years have been really exciting here. We had the refurbishment of the church and the celebration Mass. I’m happy I’ve left the place in a better state than when I found it – physically of course. I have such very fond memories of all the fundraising and all the hard work that went into achieving the end result, which is what we have today, for the people to come and celebrate Mass and pray in.

“We have hosted a number of Féile concerts and talks so it’s always important to see the community come in and use the church for that and of course our Novena continues to go from strength to strength.

“I’ve been lucky to watch generations grow up, marry, have their own children, even baptise a few, which has been lovely.

“There have been tough and traumatic times along the way but the nice thing about my job is that I get to meet people not only at vulnerable times in their lives, but at happy times too and you make that connection with people that you might not be able to do in another role.

“When I say Mass I’m looking across the altar at people. I remember that man, that woman, his story, her story. Those memories will always be with you.”

Fr Murtagh was keen to stress that he won’t be a stranger to the West Belfast community after April.

“I’ll be coming back for plenty of visits, family occasions. I’ve ten weddings between now and September so it’s still going to be very busy.

“I turned 30 and then 40 at Clonard, my best years, my most fruitful years with the priesthood were with Clonard. I’m so grateful for the support, encouragement and loyalty I’ve received from people over the years during my time here. The people are so steadfast in their faith, it’s so uplifting to see and they have kept me, us, going. In the same way I hope we have kept them going.

“I’m looking forward to introducing the new Rector, Fr Noel Kehoe from Newry, to the parishioners over the coming weeks and hope to see many familiar faces at my last Mass.”

Fr Murtagh’s farewell Mass will take place on April 19 at 11am. All are cordially invited to attend.