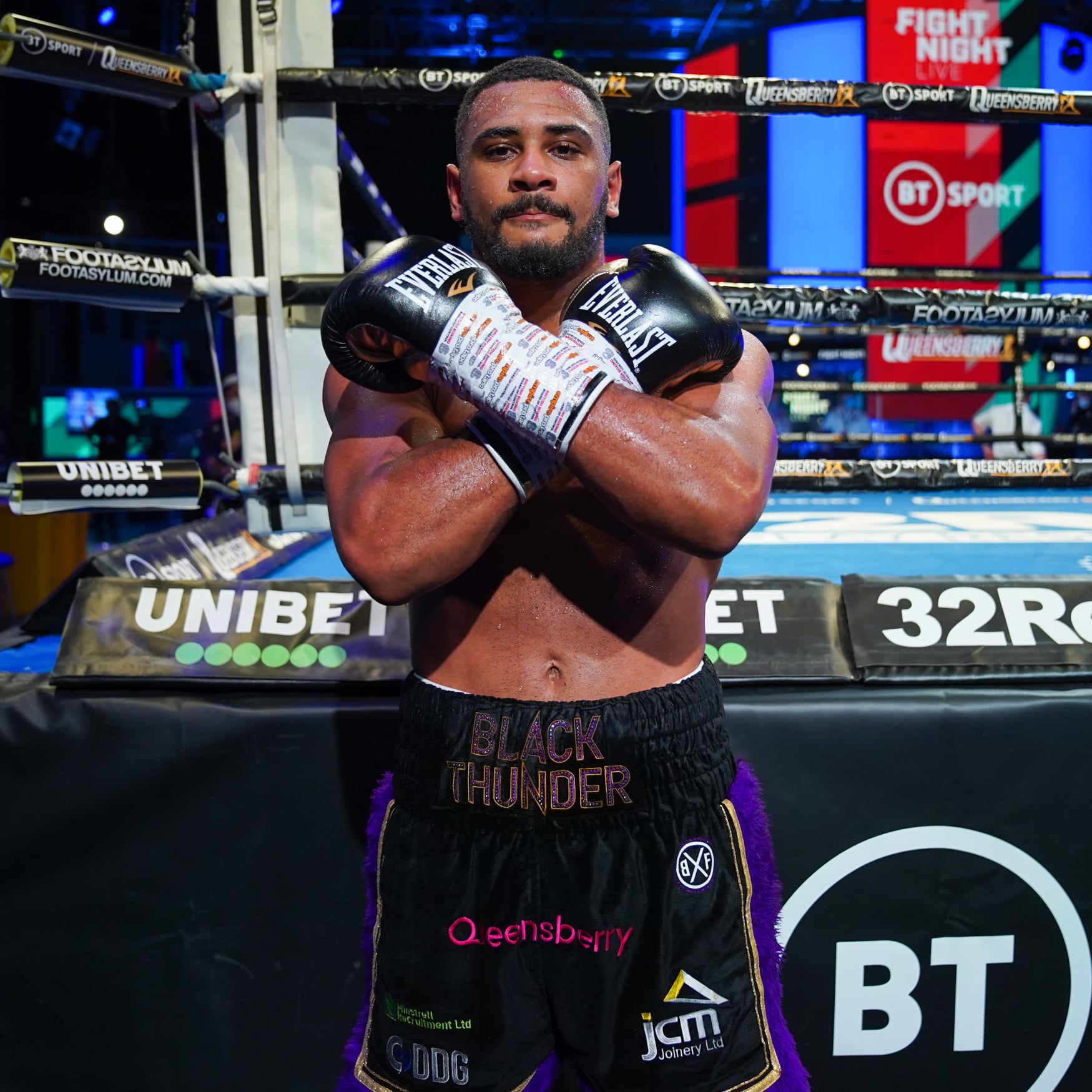 CAOIMHIN Agyarko moved his professional record to 8-0 with a stoppage win over Robbie Chapman in the BT Sport Studios last night.

One HUGE right hand changes the fight 👊@caoimhinagyarko senses the finish, steps in on Robbie Chapman and closes proceedings in emphatic style 💥 pic.twitter.com/BoMu4xXi25

The West Belfast middleweight took the fight on short notice but went through the gears against the 'Camden Caretaker' to carve out his opportunity and finish with ruthless efficiency after 33 seconds of the seventh round.

'Black Thunder' worked off his jab, mixing with aggression to get his hooks away in an effort to close the gap of his taller and rangier opponent, but after the first half of a fight he controlled for the most part, put his foot on the accelerator to wrap up a fifth early win in his eighth outing.

"We prepared for ten (rounds); I knew Robbie was tough but I fought Jez Smith here at the end of July and rushed my work when I tried to get him out of there when I hurt him in the first," said the 23-year-old former Holy Trinity amateur after.

"I just thought: 'take your time - it'll come. Don't load up with your shots; let the rhythm flow' and that's what we did - I let my jab flow.

"Each round, I just raised it 10 per cent each time and that's what they told me in the corner. I caught him in the seventh and closed the show."

Agyarko began off the jab and whilst he was conceding height, he gradually closed the gap to find his range. The jab was setting up initial attacks to the body and then to the head with his fast hands playing a part. Chapman was game and attempting to match the Belfast man, but a sharp left in the final throes of the first round from Agyarko confirmed the gulf in class.

Boxing again out of the orthodox stance, the Andersonstown man opened the second with the jab although Chapman wasn't shy in retaliating, landing the occasional counter. Chapman wasn't the stereotypical journeyman who was keen to retreat and cover as he appeared happy to make a fight of it and employed the reach advantage to pop through the jab. However, Agyarko was that bit more explosive with his trademark body attack nullifying his opponent and whilst still trying to get into decent range, was better again.

It was a battle of the jabs early in the third but Agyarko's were stiffer, cleaner and eventually began to invite Chapman in who was immediately countered with a solid shot to the midriff. The Londoner was still happy to pour forward, but by now he was being picked off with some heavy fire downstairs and looked a little ragged as the round progressed.

The fourth took a little while to warm-up with Chapman enjoying some success again - a left to the jaw the highlight - yet the Belfast man hit back with better. It was a slightly quieter round with Agyarko dropping the hands in an attempt to force his foe into a mistake, but the Londoner perhaps did enough to take the nod.

It was a better start to the round in the fifth for Agyarko who immediately showed a little more urgency, landing to the body and with a right upstairs. It appeared a line had been drawn as the former Holy Trinity amateur began to move through the gears, throwing venomous jabs and upping the ante. Still, Chapman was a game opponent and was happy to retaliate but he was now outworked.

The double jab was again a feature for Agyarko as he aimed to use physical strength to get inside as Chapman stayed a little out of range, but a crisp right hand highlighted the quality of 'Black Thunder' exemplified what he was capable of.

That was exemplified in immediately in the seventh as a monstrous right hand early in the round rocked Chapman and Agyarko, sensing blood, jumped on him - landing have fire as Chapman's head bounced around like a pinball. The Belfast man was accurate, unleashing some huge hooks that had the Englishman unable to protect himself and referee, Bob Williams had watched enough as he jumped in to save Chapman with 33 seconds of the round gone.

"I think the recipe and the magic with him is that he comes from an incredible gym in Ireland (Holy Trinity) and has a great pedigree. He has a great manager in Francis (Warren, Jnr) who is picking the fights," said trainer Al Smith after.

"I give him (Caoimhin) all the credit. He took this fight on two weeks' notice. It was going to be an eight (rounder), then a ten, so he paced it tonight. He's an easy kid to work with. He flew home (from training camp) then flew back again and has only been in the gym for two weeks (since). He's multi-talented, leads up a little bit, but every fight is a learning curve."

For Agyarko, it was another step in the right direction as his pro journey gathers pace.
Perhaps he remains a little keen to look for the killer shot early in fights but that is an aspect of his game he is keen too improve upon.

Still just 23, the Belfast man has time on his side and intends to use that to continue his education as a professional fighter, but it is already apparent that he has all the attributes to become a player in the middleweight division.

"I want to hurt people so I load up a lot, but in there we practice on being loose. I was a bit looser in there tonight and you saw the improvements," added Agyarko.

"I always say it's only a matter of time and I said before that once I have you hurt, I close the show. In my last few fights I've shown that, but we know what we're doing wrong in there.

"I know that I'm loading up a bit too much but since the last fight, we went back and adjusted. I'm improving, still only 23 and learning. That's just my eighth fight and although I had a good amateur background, I'm still learning in the pro game."