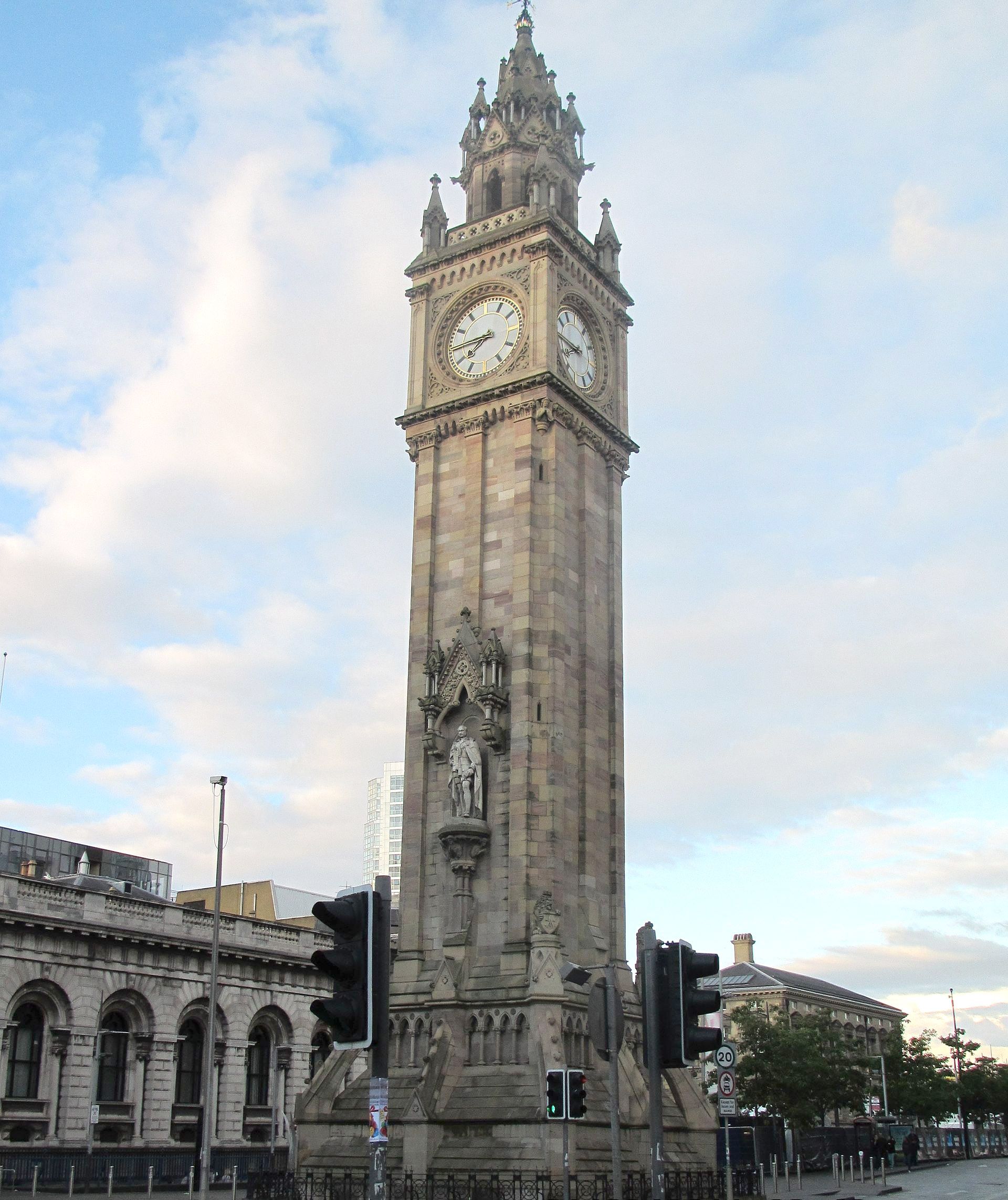 “WHAT are they looking at?” asked Billy Gillen as we walked up High Street some time ago.
In front of us stood a group of people gazing upward, some of them focusing their cameras. Billy looked back and sighed, “They're admiring the Albert!” He was, of course, referring to what is officially known as the Albert Memorial clock tower. Once the focal point of the town of Belfast, it is now ignored by the locals but greatly admired by visitors to the city.

The group we saw were on a walking tour. While being central to the life of the citizens of Belfast for a long time, it has been a source of controversy since the decision to build it was made.

When Queen Victoria’s husband, Prince Albert, died in 1861 the Lord Mayor of Belfast from 1863 to 1865, John Lyttle, who was a wealthy wholesale grocer, determined to build a monument in Belfast to honour his memory.

Lyttle contributed £1200 towards the erection of the Albert Memorial clock. He served as chairman of the Prince Albert Memorial Committee who organised a competition among architects for the design of the memorial.

In 1865 the contract to build the tower was awarded to Sir Charles Lanyon, who designed the redbrick building of Queen’s University, the Custom House and many other prominent buildings. However, news was leaked that a Newry-born architect, William J. Barre, had won the competition but was overlooked. There was a public outcry and Lyttle was forced to give the contract to Barre. Barre had worked for TJ Duff, who designed St Patrick’s Catholic Cathedral in Armagh.

Designed in the German Gothic style, the tower, with a full sized statue of Prince Albert, looked up High Street to Castle Place where the Chichester family castle then stood. The clock faces on the four sides were to be visible for miles. The two-ton bell could be heard eight miles away at that time before motorised transport.

Work on the project was delayed as it was discovered that the River Farset ran below the site. The course of the river had to diverted. By the time the building was nearing completion in 1870 Barre had died, aged just 37, suffering from tuberculosis.

The building was constructed from Scrabo stone on top of timber piles which would give rise to problems later.

There was controversy over the height of the tower. Lyttle said it would stand 143 feet while later measurements showed it to be 141 feet (43 metres).

Within thirty years it was noticed that the building had begun to tilt due to the inadequacy of the timber piles. There were fears that the building would fall, which gave rise to many arguments within Belfast Corporation.

Down the years the Albert Clock was a gathering place for ringing in the New Year for one section of the Belfast community. From 11 o’clock the crowd would gather with bands of every description, fife and drum, accordion, brass and pipe would play the favourite tunes more popularly associated with July. A few minutes before midnight a hush would come over the crowd and when the clock began to chime a mighty cheer would be heard while a hail of bottles which had earlier been emptied would be smashed against the base of the monument. Oul’ Lang Sang would be followed by God Save the Queen and after much handshaking the crowd would drift back home. A combination of violence, a strong police presence and the introduction of television sets in most homes saw the end of that outing.

Another event was featured before the increase in traffic. It was the race against the clock. Starting at the corner of Bridge Street and High Street, runners would set off at the stroke of midnight and hope to touch the base of the clock before the last stroke sounded. Very few were able to accomplish this, but Paddy Black from Carrick Hill was carried home shoulder high when he did the trick on a summer night in the early 1930s.

When scaffolding was erected around the tower in the spring of 1924, rumours spread that the tower was to be demolished. The city surveyor told the Belfast Corporation Improvements Committee that the tower was “very much out of plumb” and might have to be removed. He disclosed that he had invited quotations from a number of firms for the repair and renovation of the tower but none was prepared to tender except on the basis of time and materials. The stonework had decayed and it would cost thousands to renovate.

The Corporation voted to remove the tower but this decision was later overturned. The upkeep of the tower and clock would feature very frequent try throughout the years. In 2002 a project to preserve the tower was completed, bringing the clock tower back to its original glory. Increasing throngs of tourists marvel at ‘Belfast’s Leaning Tower while the locals continue to ignore it. A ticket for a guided tour to visit the Albert Memorial Clock costs £15.