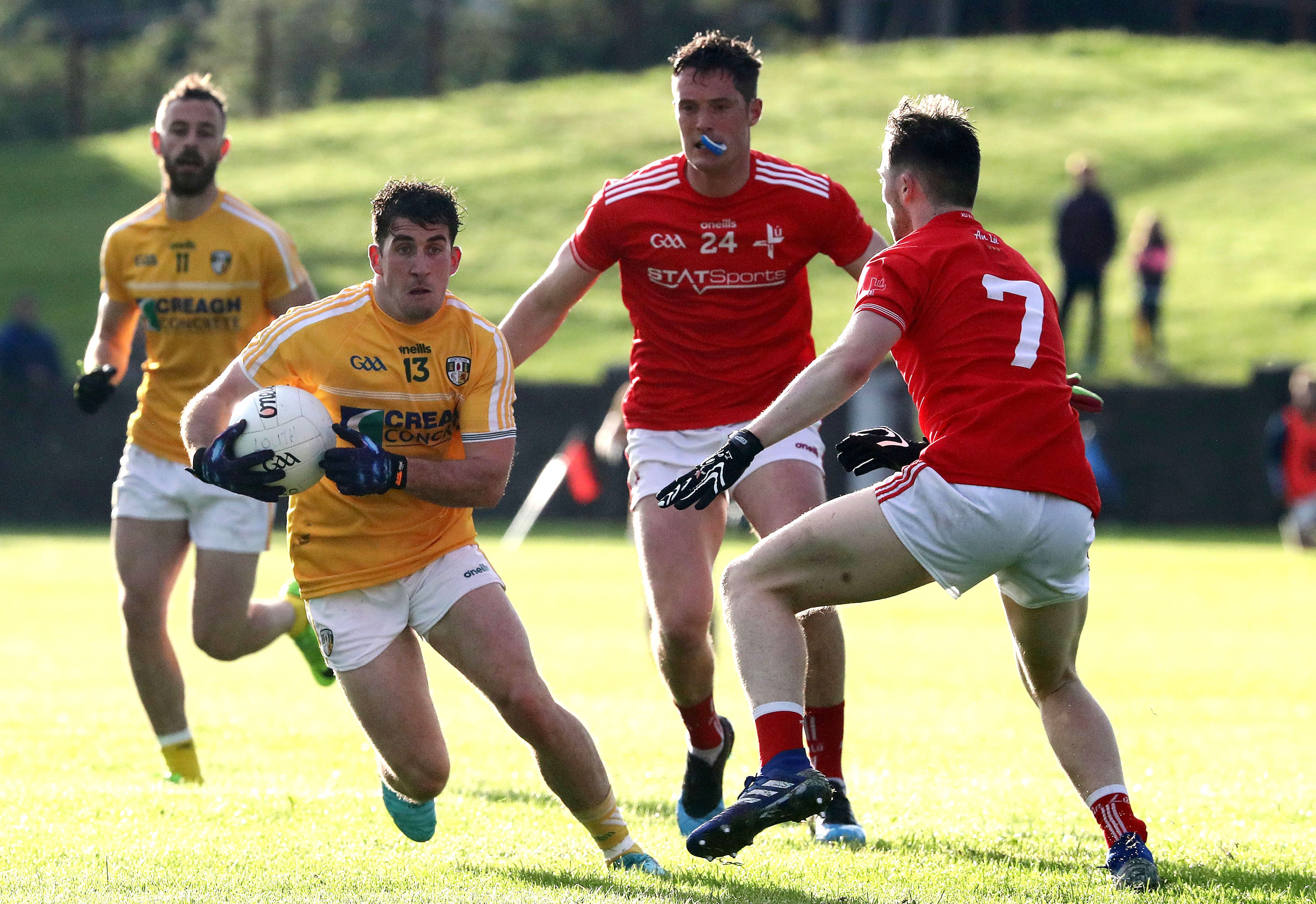 Ryan Murray in action against Louth in the 2019 All-Ireland Qualifiers when Antrim scored a victory. Both sides are under new management with Enda McGinley leading the Saffrons, while his former Tyrone boss Mickey Harte is at the helm in the Wee County INPHO

FAMILIAR foes will battle it out on the pitch while former colleagues will pit their managerial wits against each other on the sideline. Saturday’s League meeting between Louth and Antrim at Haggardstown will attract a bit more interest than the average Division Four fixture.

McGinley has Stevie O’Neill in his backroom team while ex-Tyrone defender and coach Gavin Devlin is Harte’s assistant.

Harte was a six-time All-Ireland winning manager with Tyrone. McGinley, O’Neill and Devlin were key members of the 1997 Minor team who went on to win back-to-back U21 titles in 2000 and 2001.

Tyrone annexed the Sam Maguire in 2003, 2005 and 2008 with O’Neill famously returning on the eve of the ’08 decider with Kerry. McGinley, an All-Star midfielder in 2008, was on all three senior-winning sides while Devlin was a member of the ’03 and ’05 squads.

As for the players, they’ll know each other almost as well as the respective management teams.

Antrim’s most recent Championship success came at Louth’s expense in 2019 when they Saffrons recorded a famous 2-16 to 1-11 in Drogheda.

Ryan Murray kicked 0-6 for Antrim in that Qualifier win, but he said previous meetings will count for little when the teams line-out on Saturday afternoon.

“There will be a lot of interest in the game. Enda (McGinley) and Stevie (O’Neill) would have been used to taking orders from Mickey over the years and now they’ll be trying to out-fox him.

“In recent years, we’ve built up a bit of a rivalry with Louth – we played them plenty of times. We met in a Division Four final in Croke Park and the Qualifiers in 2019. We know each other well. They’ve a new management set-up as well, so it will be hard to look too much into any previous meetings.”

The revamped format for this season’s Allianz Football League sees each division split into two groups – a north and a south region.

Antrim face Louth at Haggardstown near Dundalk on Saturday before back-to-back home ties against Sligo (Sunday, May 23) and Leitrim (Sunday, May 30) at Corrigan Park.

Both Louth and Leitrim were relegated from Division Three last season while Sligo, who are now managed by former Armagh and Crossmaglen All-Ireland winner Tony McEntee, defeated Antrim in Markievicz Park last February.

While Antrim have, undoubtedly, been pitted in the tougher section of Division Four, Murray knows a good start is crucial this weekend.

“It the old cliché, but it almost like Championship football already,” said Murray.

“Usually, you say that about the League because it is so important to us, but at this time of the year, it starts to feel like summer football.

“The way the League is split in two groups this year, if we can get a win over the weekend, you are looking ahead with confidence whereas a defeat leaves you grasping for your next result. It is a massive game to start off with.”

While the Lámh Dhearg attacker is still only 27, he is now one of the more senior members of the squad.

His clubmate Paddy Cunningham has also committed for one more campaign while Niall McKeever (Portglenone) and James Laverty (Cargin) have returned to the fold.

Having impressed with the Antrim U20s last season, the likes of Pat Shivers (Cargin) and Adam Loughran (Aghagallon) will be hoping to force their way onto McGinley’s match-day squads in the coming weeks.

Murray says he has been impressed by the new management team, which also includes St Gall’s stalwart Sean Kelly and he believes everyone is eager to impress and nail a place in the starting 15.

“It is tricky, but plenty of counties are in the same boat with the short run-in time.

“Everyone is raring to go and it is up to the players to go out at the weekend and perform.

“The only reason you come back every year is because you want to give it your best for the county. You are representing your club as well.

“It doesn’t really matter who is managing the county, you always want to do well.

“This year, it is a clean slate for everyone. We’ve some new players on the panel and also some boys who have returned to the panel.”

He added: “You have to train away and have the right attitude and hopefully Enda, Stevie and Sean (Kelly) will give you a chance to start. It has been good and competitive in training.

“It is enjoyable learning from Enda and Stevie – they’ve played at levels we can only dream of playing at. Hopefully we can feed off that.

“I played against Sean many times against St Gall’s. We you came out on to the pitch and Sean ran up to mark you, you knew you were in for a tough day. There is a great buzz about the camp and, hopefully, we can make a good start this weekend.”

Since the 2019 win over Louth, Antrim have lost Matthew Fitzpatrick (Glenavon), Stephen Beatty and Padraig Nugent (both Belfast Celtic) to soccer, but the likes of Cunningham and Michael McCann have returned to bring some much-needed experience to the side.

What Antrim lacked last season was consistency and a killer-instinct in front of the posts.

Working with one of the game’s all-time great finishers can only bring about improvement from the Antrim forwards, even if they’ve only been working with O’Neill for a short period of time.

Louth suffered relegation last year, but their one victory was a 3-14 to 0-16 win over Down in round seven before they lost out to Longford in the Leinster Championship.

Like Antrim, they’ll be rejuvenated by a new management set-up and the tight pitch at St Geraldine’s ought to suit their style of playing.

However, Antrim only lost out to eventual Ulster champions Cavan by four points in Breffni Park last November and, if they can build on that performance, they could come away with a narrow win and two crucial points. 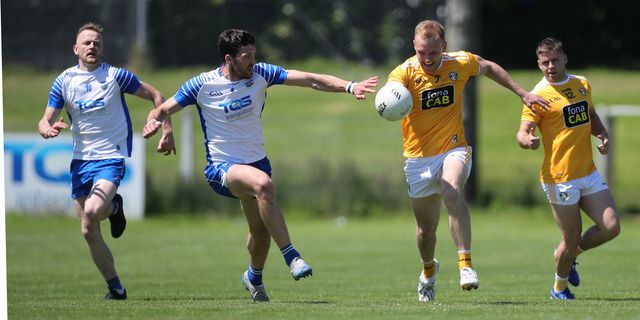 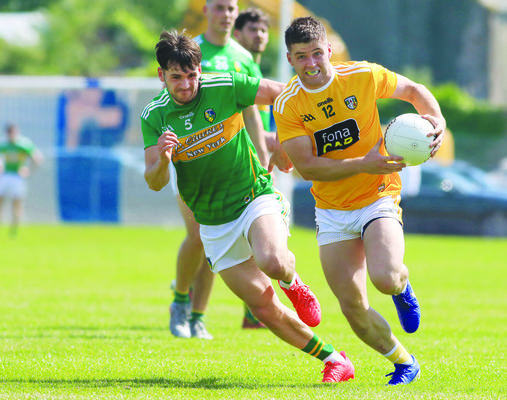 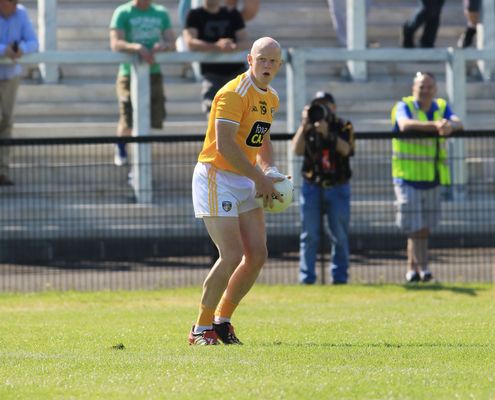