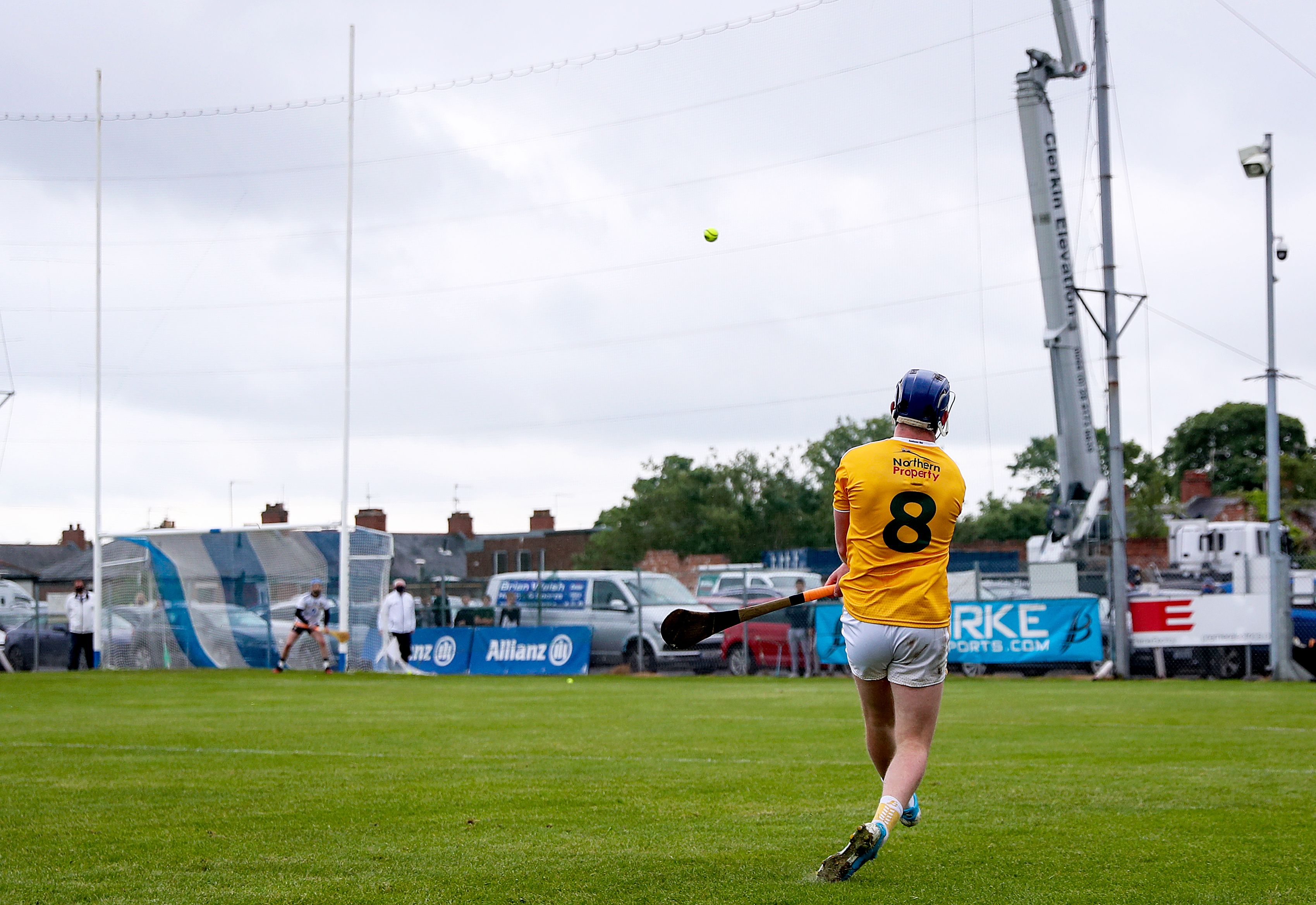 Allianz Hurling League Division One, Section B
Antrim 1-21 Wexford 2-18
KEELAN Molloy was the Antrim save as his last-gasp point rescued a draw against Wexford in thrilling ding-dong battle at Corrigan Park this afternoon.

It was a fitting end for the Dunloy man who hit five magnificent points in a game that toed and from in the second half as the Saffrons battled back from a shaky start when conceding two early goals.

The result may be enough for Antrim to secure their Division One stays and was no less than they deserved in a game full of incident with both teams finishing with 14 players and Wexford manager Davy Fitzgerald sent to the stand in the first half after an incident along the sideline.

In the end, a draw was probably a fair reflection on a game that had all in attendance gripped as both sides dug deep to try and get their noses ahead at the final whistle, but it was Molloy who ensured Antrim took a deserved point with that score 10 minutes deep in time added on.

After an early exchange of points, Wexford were in for a third minute goal as Lee Chin came out a ruck, put Liam Og McGovern through who popped to the unmarked Conor McDonald to fire low to the net.

After another exchange of scores, James McNaughton landed a long free, but Antrim were undone yet again on nine minutes as Kevin Foley's shot from deep dropped and broke to Paul Morris who jumped to the net.

It was a dream start for Wexford who led 2-4 to 0-4 at the water break, but it came at a cost as they lost Jack O'Connor to injury.

Antrim gradually began to grow into the game and started winning the breaks around the middle as the sides went scores for score, enjoying a decent spell with three-in-a-row as Connor Johnston took a point when a goal may have been on offer, while McNaughton landed a free and won the subsequent poc-out to add another and bring the gap to three.

Antrim then had what appeared a decent shout for a penalty waved away as another stray poc-out from Mark Fanning was pounced on by Neil McManus who appeared to have been trailed back by Liam Ryan, but play was waved on.

Wexford manager Davy Fitzgerald was then sent to the stand for an incident along the sideline, but his team finished the half well with two points from Chin - one free - to leave them 2-9 to 0-10 ahead at the break.

McDonald punished an Antrim mistake with a point to start the second period, but Keelan Molloy replied immediately as Antrim then began to eat into the gap, hitting sx to the next seven points with Cunning on target with five frees and McNaughton adding on from play, whilst Wexford's sole score game from a long Mark Fanning free.

The Slaneysiders were reduced to 14 on 46 minutes when Matthew O'Hanlon was shown red for a tangle with McManus who picked up his first yellow in the process as the sides were level at the water break.

McManus then gave Antrim their first lead, but a Lee Chin free and point from substitute Joe O'Connor edged Wexford back in front.

Ciaran Clarke pointed to level again before Wexford seemed to break for home with scores from Paul Morris and Chin.

However, Antrim found the reply as on 67 minutes, Clarke did well to force a turnover with McManus showing excellent vision to gather and pop to Shea Shannon who buried low to the net.

Chin squared it again as the game entered a lengthy period of stoppage time with McManus picking up his second yellow for a chop down to leave both teams with 14 players, but it was very much all to play for with McNaughton edging Antrim ahead after Keelan Molloy shot at goal was brilliantly stopped and after Chin levelled, it seemed Wexford had hit the decisive point when McDonald sent Liam Og McGovern clear to pop over

However, they couldn't engineer the insurance point as Antrim mustered a late charge with Shannon playing an excellent ball to Molloy out on the right to secure share of the spoils.