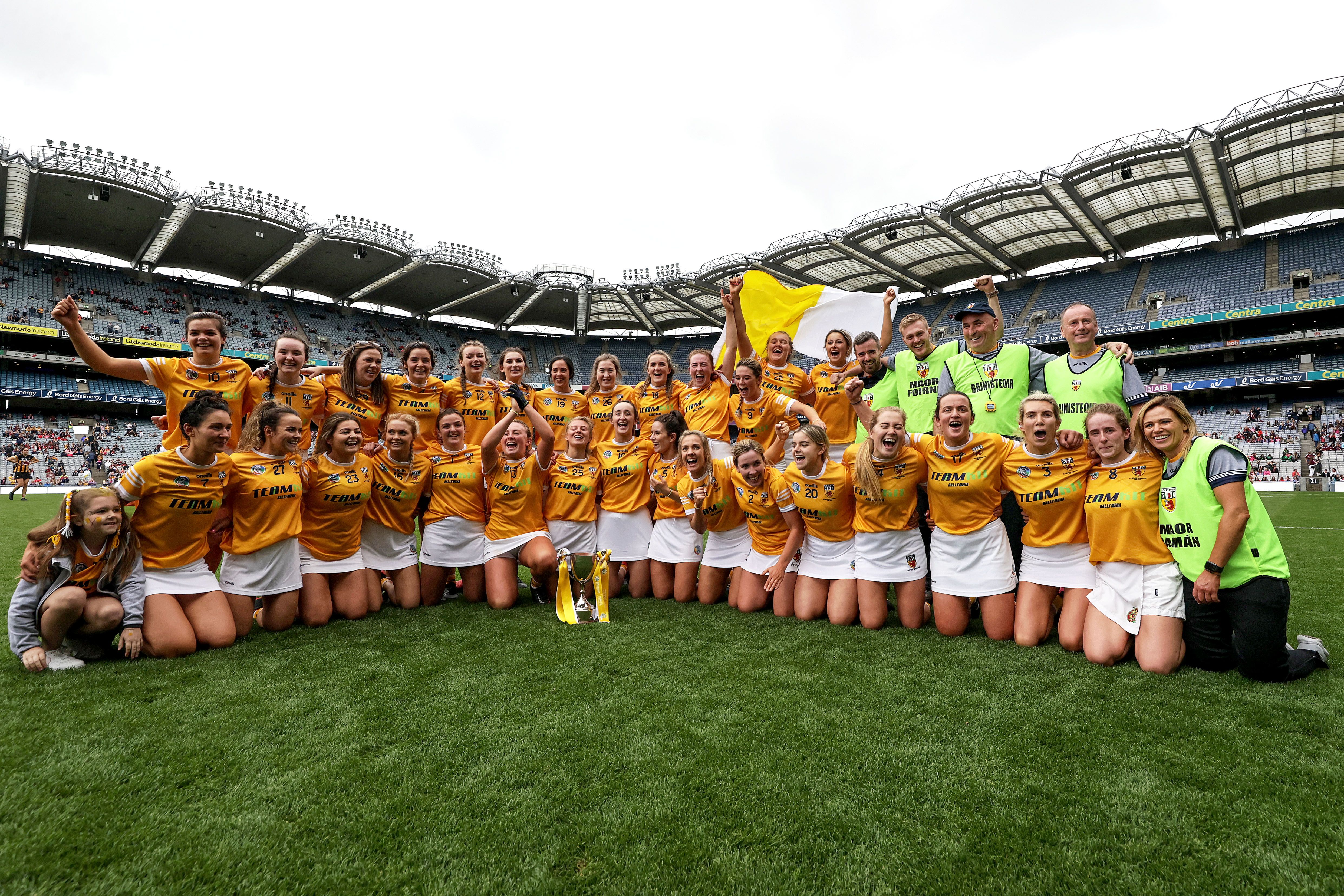 The Antrim team and management celebrate after the game INPHO

The winning margin in no way flattered the Saffrons; indeed, it probably did to the Noresiders who were outplayed from the second quarter on as Antrim gained full control and didn't look in any trouble for the remainder of the game.

Maeve Kelly was in stunning form for Antrim, finishing with 1-5, while Róisin McCormick clipped over nine points in a another contender for player-of-the game.

"I can't even believe it as we've worked so hard," said the Ballycastle star.

"There was no doubt in our minds that were not going to lose that today, but just to win it is unbelievable.

"We haven't really stopped since last year and just rolled on through, We did our training on Zoom with Lucia, Kurtis, Dowdsy, Humpy and Jingo.

"We worked so hard since January for this. It's been a long old season, but it's been worth it.

"I was so nervous (near the end) because two weeks ago against Galway we were well up and sort of took our eyes off it, so we knew today we weren't going to stop and just had to keep going."

Kelly got Antrim off the mark with a fine score a minute in, but Kilkenny had settled better and reeled off four-in-a row with Sarah Walsh setting them on their way, adding another after Eva Hynes had scored and then Ciaran O'Keefe produced a fine catch and finish.

It could, probably should, have got even better for the Noresiders on eight minutes as Danielle Quigley found herself through on goal, but her shot came back off the butt of the post and was cleared.

This let-off seemed to bring Antrim to life after a shaky start and they were level two minutes later thanks to a trio of Róisin McCormick points with two of those from play.

Team captain, Lucia McNaughton who was celebrating her 26th birthday, restored the lead for Antrim with a fine effort from range and following an exchange of points from Quigley and Kelly, it was the Saffrons holding a slender 0-6 to 0-5 lead at the water-break.

It remained nip-and-tuck as play resumed with the Cats hitting two of the first three points to level, but Antrim were looking that bit better going forward and on 21 minutes they were rewarded when Kelly danced around a challenge and bore in on goal. While the Ballycastle star was hooked, she got a second chance and blasted low to the net.

Kilkenny responded well with points from Hynes and Sophie O'Dwyer, but Antrim would finish the half much better with McCormick landing a free and then one from play after what was thought to be a point from another free ruled out by Hawkeye.
Nicole O'Neill found her range in between and deep in stoppage time Caitrín Dobbin lashed over to help Antrim into a 1-11 to 0-9 half-time advantage.

Just like the opening period, it was Maeve Kelly who was first to register after the restart as she pointed just 30 seconds in and when Aine Magill found her range, there was a sense that things were already beginning to get away from Kilkenny.

The Cats really needed a goal and looked like they may be through only for a brilliant interception from Niamh Donnelly, but had to be content with a pair of pointed frees from O'Dwyer.

Antrim were just moving the ball better and points from McCormick and Dobbin would follow, while at the other end, goalkeeper Catriona Graham did brilliantly to close down and save from Hannah Scott.

However, the goal Kilkenny were pushing for did arrive on 42 minutes O'Dwyer standing over a 20-metre free and lashing low to the net as the Antrim defence appeared to be caught napping.

The response was quite magnificent as McCormick pointed immediately and then Kelly underlined her player-of the-match credentials with another superb point.
It was game over by the water-break as another excellent Antrim move saw McCormick pick out Caitrín Dobbin to finish low to the net and at 2-18 to 1-11 heading into the final quarter, that was that.

Both sides ran their bench in the closing stages with Kelly and McCormick adding further scores and while Kilkenny credibly stuck to the task with substitute Threase Donnelly pointing and Sarah Crowley finding herself through to blast to the net, it was only fitting that the Saffrons had the final say with Nicole O'Neill landing the final point to wrap up what was quite a magnificent day for Antrim.