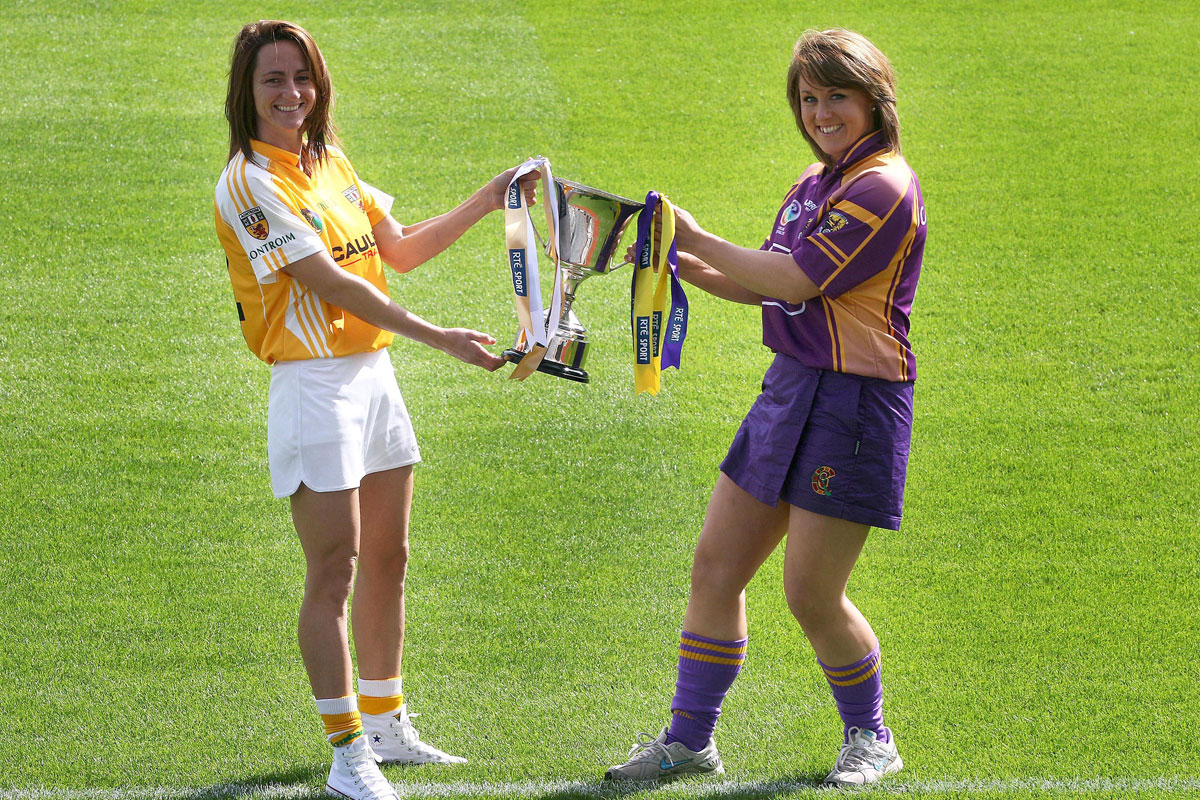 ANTRIM’S senior camógs will attempt to do what only Offaly have done before when they face Wexford in the All-Ireland Intermediate final at Croke Park on Sunday (2 pm).

The Faithful County are the only side to make the immediate step-up from winning the Junior crown to annex the Intermediate title 12 months later, but that is the challenge that faces the Saffrons at the weekend. Last year, Antrim needed a replay to overcome a strong Waterford challenge in the Junior decider but have slotted in seamlessly to the higher grade and now find themselves just one win away from competing at senior level next year.

Both sides enjoyed narrow wins in their respective semi-finals to advance into Sunday’s decider.

Antrim overcame Limerick by 2-11 to 2-9 at Navan, while the Slaneysiders edged out Derry at the same venue by a point (3-8 to 2-10) to stop an all-Ulster final.

“There is a great bond of loyalty within this squad,” says the Waterford native, who was brought up in County Down.

“They have done everything I have asked of them and I know they are more than capable of beating Wexford”.

The past fortnight has been one injury after the other as the demands of Championship Camogie and ladies football have taken a heavy toll on Joe’s squad.

Inspirational half back Sinéad Laverty ruptured her knee ligaments the day after Antrim’s semi final success over Limerick at Páirc Tailteann in Navan. Midfield dynamo Rhona Torney is nursing a bad ankle injury sustained in the semi-final and following a hectic Championship encounter at Corrigan Park between St Johns and Creggan there are doubts over the availability of key defenders Aishling Jackson (knee) and Cathy Carey (hand fracture).

Corner forward Katie McAleese from Portglenone is also carrying a nasty hand injury but attempting to soldier on. Antrim have already played Wexford in the qualifiers and it was Baldwin’s only loss since taking over as manager a fortnight before the Ulster Championship started.

In their Group 2 game at Ashbourne, the Model County enjoyed a 2-11 to 1-7 victory en route to topping their group. Antrim defeated both Cork and Galway in their other group ties but Wexford could only manage a draw with the Westerners so a tight encounter is expected at HQ this weekend.

“The victory at Ashbourne flattered Wexford a little,” explained an enthusiastic Baldwin.

“We had two key midfield players graduating that day and another couple of girls on holiday, and so with a stronger team this time I feel very positive.

“Injuries or not, the fifteen players in Saffron shirts who start at Croke Park, will give everything for Antrim and with potential match winners like Jane Adams, Natalie McGuinness (GAA writer’s player of the month for August) and young Orlagh O’Hara, who came on to score our winner with the last shot of the game in Navan, only a fool would write us off.”

Captain Jane Adams has had a fine All-Ireland Championship so far scoring two goals and 22 points on the road to Croke Park.

“We aren’t going down there for the day just to say we’ve been to Croke Park,” said the Rossa star.

“Most of us have already played there anyway. We are going down to bring back an Intermediate title and launch ourselves into the senior Championship next year. Anything less isn’t good enough.”