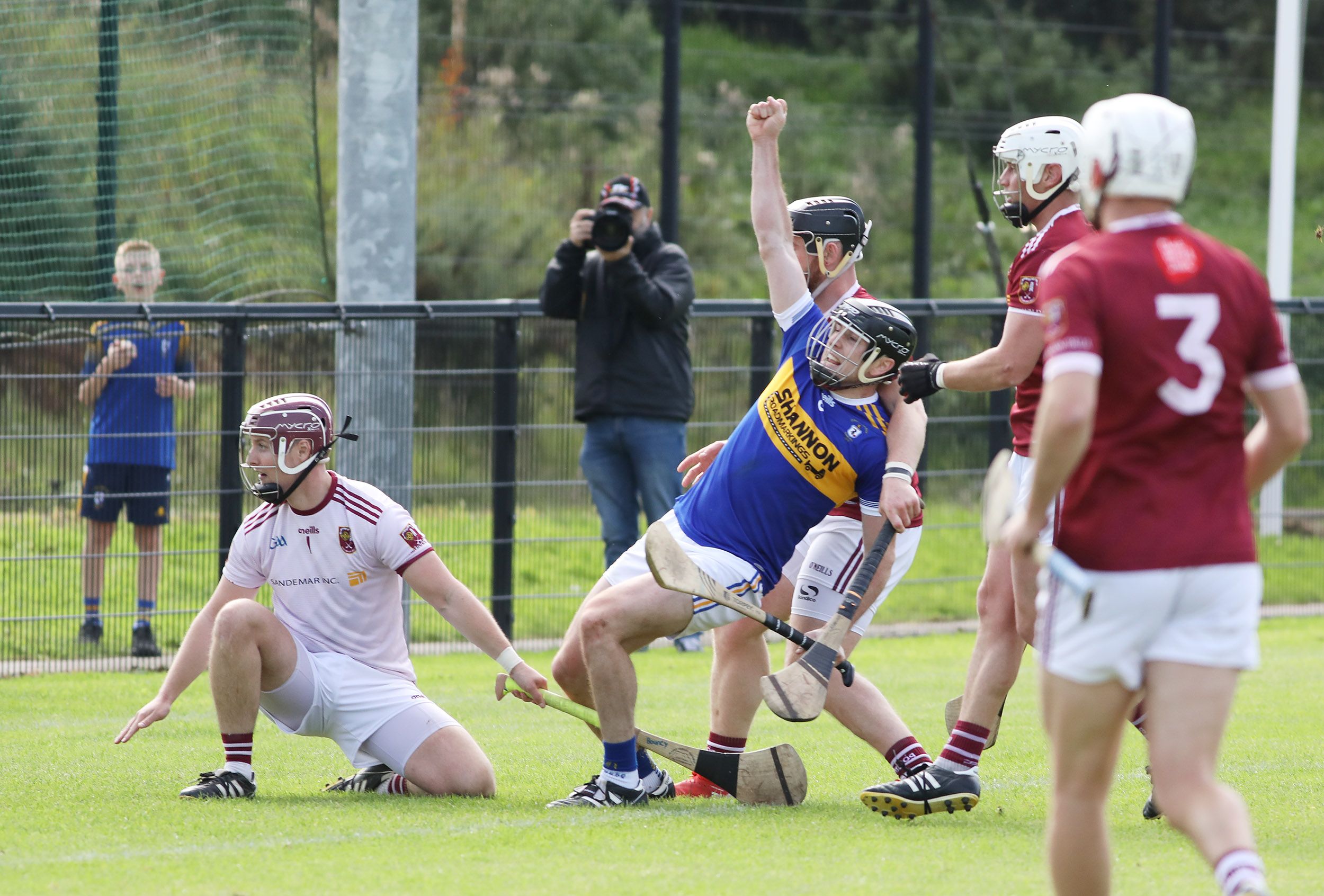 JUST when it seemed that Cushendall had once again produced the great escape, up-popped Dara Rocks to blast home the winning goal that has sent Rossa through to their first Antrim SHC final in 17 years.

Sunday's game in Dunsilly lived up to the pre-match billing and then some, but then when does the Antrim SHC ever let you down? The game was something of a slow burner but reached an incredible crescendo with Cushendall battling back from five down and then grabbing what looked to be a decisive lead with Paddy McGill lashing to the Rossa net as the game ticked into stoppage time, but there was to be that late drama with Rocks banging home the winner.

It was in stark contrast to last year when Rossa were undone with a last-gasp score at the same stage by Dunloy as the players, management and supporters all celebrated wildly at the end.

There were so many big moments in this game, but none more so than the decision at half-time to push man-of-the-match Michael Armstrong up to full-forward from the full-back position he had occupied in the opening 30 minutes. Suddenly, Cushendall looked vulnerable with the long ball in causing all sorts of problems as Armstrong found the net twice and crucially won the ball to set-up Rocks for the winner.

From an opening period when Rossa looked a little below par, they had found the key ingredients but as always, it requires sheer bottle to get the better of the Ruairis who just don't quit.

The opening half gave no indication of the chaos to come as the sides went score-for score early on with Christy McNaughton and Deaglan Murphy trading points from placed balls before the teams got their first from play with Neil McManus for Cushendall and Stephen Beatty for Rossa.

Aodhán O'Brien levelled the game from midway before McManus and Beatty traded further scores and Stephen Shannon then shot Rossa into a slender 0-5 to 0-4 lead at the water-break.

It was level again as Scott Walsh fired over a trademark score from deep as the sides remained neck-and-neck with points from Gerard Walsh and Deaglan Murphy - who appeared to have a sniff of goal - cancelled out by Christy McNaughton frees.

Beatty again restored the Rossa advantage, but then came the opening goal of the afternoon on 23 minutes when Paddy Burke was well picked out and he raced through, cutting onto his left and firing beyond Donal Armstrong.

The Rossa goalkeeper would then make a stunning stop from Fred McCurry, but the city side found themselves just one adrift as the break with Daire Murphy nipping in to score in stoppage time as Cushendall led by 1-8 to 0-10.

The switches at the break saw Gerard Walsh dropping back to pick up McManus with Armstrong now deployed at the opposite end of the field and this would not take long to pay dividends.

Aidan McNaughton did have the first say of the second half for Cushendall, but after Deaglan Murphy tapped over a free, Tiernan Murphy then played an excellent ball into Armstrong who had drifted out to the left of goal, but crashed an unstoppable shot past Eoin Gillan.

Another pointed free gave Rossa a three point advantage that remained after McManus and Adrian Kenneally - his first score for his new club - traded points.

Cushendall lifted it a level and points from Niall McCormack and Eoghan Campbell left one between them, but then Armstrong would strike again as Daire Murphy made a break at pace, played the ball into Armstrong who turned Martin Burke and kicked to the net.

Rossa led by 2-15 to 1-14 entering the final quarter, but this game was just getting going with points from Scott Walsh and Campbell halving the deficit.

It seemed Rossa had finally broken for home on 52 minutes as goal number three came and this time it was Beatty who emerged from a ruck to kick home and put five between them.

After Fred McCurry hit back with a Cushendall point, Rossa almost bagged a fourth major as Conal Shannon let fly but his effort was saved up and over by Gillan and then on 56 minutes, it was very much game-on as a long free from Paddy Burke broke in the penalty for McCurry to turn home.

Now Cushendall's tails were up and after Alex Delargy and Eoin Trainor exchanged points, the North Antrim men drew level as Scott Walsh and Fergus McCambridge launched over scores with the game now ticking towards 60 minutes.

It was now all to play for once again and then on 60 minutes it appeared the decisive moment had arrived as a long ball forward saw Rossa team-mates Gerard Walsh and Aidan Orchin collide with the ball breaking to Paddy McGill on the right who had time to steady and send a bullet of a shot low to the Rossa net.

Game over? Not quite. Rossa knew they needed a goal and Gerard Walsh looked to drop a long free into the penalty area, but the ball went all the way over and now the margin was two. From the poc-out, Walsh had all the time and space to fetch and send another long ball in.This time Armstrong got onto it, spotted Rocks peeling off his shoulder and passed inside with super-sub cracking home.

Cushendall had one last chance to send this game into extra-time, but it wasn't to be as Rossa won a free, got the ball to the other end of the field and that was that as the whistle sounded to spark scenes of jubilation for all in blue and gold.

A first county final in 17 years and deservedly so as they came through an epic battle to find the answers when the ultimate questions were asked. 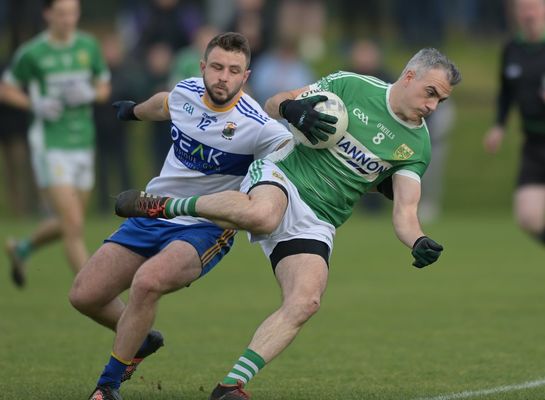 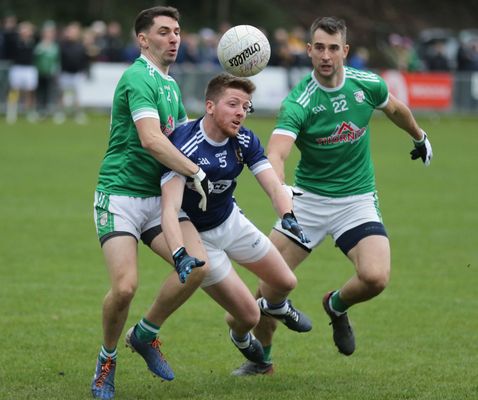 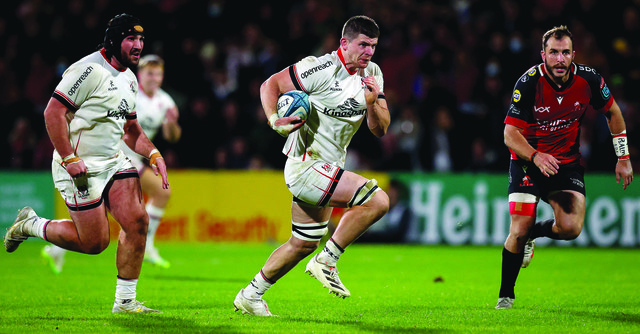