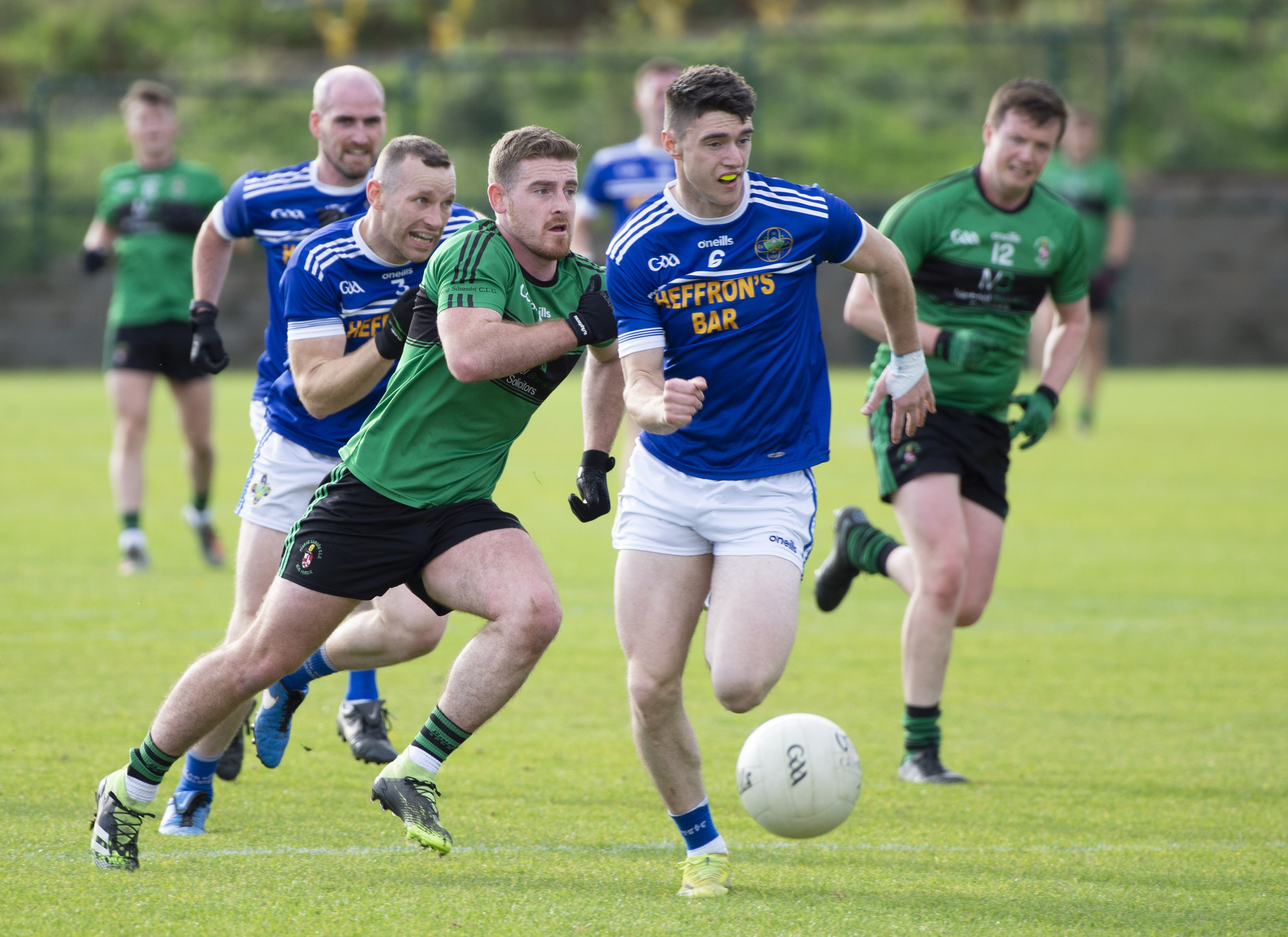 Barry MvCormick gets out in front marie

AN impressive performance from Tír na nÓg saw them qualify for the final of the Antrim Intermediate Football Championship as they proved just too strong for Sarsfield's at Davitt Park on Sunday.

The Whitehill side was solid at the back and much more fluid in attack as they led throughout this semi-final and were full value for their win win the end.

Sarsfield's just couldn't build a head of steam in this game and although they were just two adrift at the break, Tír na nÓg put their foot on the accelerator upon the restart and and early run of scores put daylight between the teams.

Sarsfield's did battle well, but couldn't get much going in attack with the Randalstown club having no such issues with 10 different names on the scoresheet including the impressive Aaron McNeill who top-scored with four for his side, one short of Niall McKenna who hit five for the Paddies.

The tone was set early in this game Sarsfield's kept possession and probed without being open up a disciplined Tír na nÓg defence that swarmed and turned possession over.

The Randalstown side were just that bit more direct with their attacks and this approach paid dividends from their first two forays with Ciaran O'Neill and Sean Duffin both thumping over from deep.

Sarsfield's got off the mark with Niall McKenna kicking a free, but Aaron McNeill immediately responded in kind.

The opening period was a little stop-start with players going down injured and third didn't help with the flow of the game, but it was Tír na nÓg who finally ended a barren nine minutes with Darren McCormick kicking them into a 0-4 to 0-1 lead at the water break.

Sarsfield's were starting to find a bit more space going forward, but their shooting was letting them down and  despite the wind advantage, converted just three more times before the half with Niall McKenna kicking a part and Niall McAlea adding his name to the scoresheet.

Tír na nÓg was that bit more economical and with Darren Fagan landing a free and then Kevin Sheerin pointing after claiming a mark, it was the Randalstown men leading 0-6 to 0-4 at the half.

The Randalstown men were quick to kick on in the second period as they rattled off five points within nine minutes to push themselves into a winning position.
It took just 18 seconds for Ciaran O'Neill to thump over another from range, with Aaron McNeill adding one from the left and then Ciaran McKeown fisted over when through.

They almost had the ball in the net on 35 minutes as Kevin Sheerin got onto a broken ball but his punched effort from a low position came back off the post although Ciaran McGrellis was there to fist over and when McNeill burst clear to add another, Tír na nÓg looked in a very healthy position.

Sarsfield's just didn't get a foothold in this period but finally added to their tally with Rian McShane finishing a decent move, but a Darragh Fagan free and a point on the break from Eamonn Og McAllister left Tír na nÓg 0-13 to 0-5 at the second water break.

It appeared there was no way back for Sarsfield's, but they did get a break when Ciaran O'Neill was black carded on 49 minutes, leaving the Randalstown men a player light for 10 minutes, but Sarsfield's couldn't engineer the goals they badly needed.

Instead, it was a pair of McKenna frees either side of a Daniel McKernan point from play that brought them back to within six, but time was not on their side.

Aaron McNeill settled any Tír na nÓg nerves with a point in response and although Sarsfield's substitute Miceal Ferris saw a rasping drive flash over the bar, there would not be another chance for a major.

Instead, the only goal of the game arrived at the other end and with the last kick as Tír na nÓg were awarded a penalty after McAllister was bundled over and goalkeeper Sean Paul McAtamney stepped up to tuck it away and seal Tír na nÓg's place in the final.