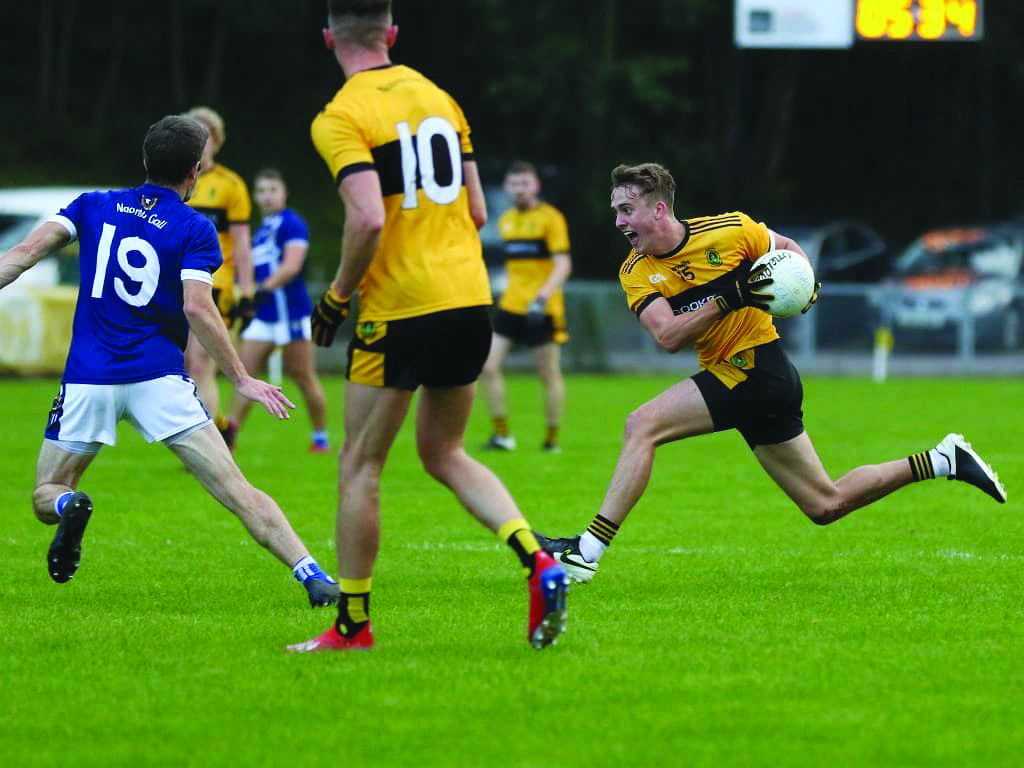 THE quarter-final pairings for the Antrim Senior Football Championships were confirmed on Wednesday night.

St Gall’s rolled back the years with a vintage display to edge St Enda’s thanks to a 1-12 to 1-9 win at Glengormley to top the Group Four standings.  Both sides were already assured of a place in the last eight before last night’s final group game, but you wouldn’t know it judging by the intensity of the game.

A goal from CJ McGourty midway through the opening half gave St Gall’s the upper hand following good work from Terry O’Neill and Kevin Niblock.  With experienced defender Sean Kelly returning to the side in his familiar role of sweeper, Naomh Éanna struggled to make any meaningful headway in the first half.

They managed to tag on a few late points from Donal Walsh and Odhran Eastwood (free), but Paddy Murray’s men were full value for their 1-7 to 0-6 half-time lead.

They maintained their advantage in the second before the hosts were gifted a lifeline in bizarre circumstances when referee Sean Laverty restarted the game after the second water break with St Gall’s not yet in position.

It was left to Eastwood to roll the ball into an empty net and the Antrim attacker added a point moments later to make it a three-point game.

However, St Gall’s showed plenty of composure late on to weather the storm and  will face Portglenone in the last eight (Tuesday, 6.45pm, Dunsilly) while St Enda’s take on Creggan (Sunday, 2pm, Dunsilly) who topped Group One with a resounding 1-16 to 0-7 win at Ahoghill.

The hosts needed a handsome win to have any chance of making it through to the quarters, but they were no match for Kickhams with Paddy Cooey scoring the game’s only goal in the early stages of the first half.   In Group Two Rossa secured a 0-16 to 1-1 win over Lámh Dhearg at Hannahstown to progress as runners-up at the expense of St John’s.

In a game which saw both sides enjoy good spells, a Paddy Cunningham penalty before the break helped cut Rossa’s advantage back to a single point, 0-11 to 1-7 after scores from Dominic McEnhill, Cormac McGettigan (two), Thomas Morgan and Colm Fleming had Rossa in the driving seat early on.

The game was nip-and-tuck again after the break before Sean Pat Donnelly and Morgan helped move Rossa two clear, but Lámh Dhearg’s Dáire Larkin almost snatched victory at the end only for his shot to crash off the post.

The Shaws Road side now face the daunting prospect of taking on county champions Cargin at Ahoghill next Tuesday night (6.45pm) while Lámh Dhearg face Aghagallon at Corrigan Park on Sunday (2pm).   The Toome outfit ended their Group Three campaign with a 100 per cent record thanks to a 3-19 to 1-7 win over St Brigid’s at Musgrave Park while Aghagallon lost 2-7 to 2-19 at Aldergrove.

MEANWHILE, semi-final pairings in the Antrim Junior Football Championship remain unclear after Cardinal O’Donnell’s lodged an appeal to the Ulster Council regarding the final standings in Group Two.

Originally, St Comgall’s had topped the group ahead of Ardoyne and O’Donnell’s on scoring difference after the trio had all finished on six points.  Yet, the Antrim town side amassed their superior scoring difference thanks largely to their mammoth 16-23 to no-score win over Mitchel’s in their final group game last Wednesday night at Sally Gardens.  It has since emerged that St Comgall’s lent Mitchel’s two of their own players in order that the fixture could be played.

The Antrim county board then decided not include the scoring difference accrued against Mitchel’s in any of their games meaning Ardoyne top the group with St Comgall’s in second and O’Donnell’s in third.

O’Donnell’s feel they ought to have been awarded second place and are set to have their appeal heard by the Ulster Council on Monday while the semi-finals of the Antrim JFC are scheduled for next weekend.

As things stand, Ardoyne are due to play Ballycastle with St Comgall’s taking on Pearse’s, but that could yet change. Kickhams are managed by former Down All-Ireland winner Ross Carr and he says the situation would have been unfair on whichever team from the group missed out.

“My understanding of it is that we’ve now finished top of the group with St Comgall’s second and O’Donnell’s in third. It is probably tough on O’Donnell’s because they beat us (Ardoyne). “If they take the scoring difference away from St Comgall’s, then ourselves and O’Donnell’s benefit because we had already played Mitchel’s and hit a huge score against them.

“St Comgall’s would have won the game had Mitchel’s fielded a full team so you can’t allow us to benefit from that either. It was always going to be tough on whichever one of the three teams didn’t get through.

A spokesperson for O’Donnell’s declined to comment, but confirmed that an appeal has been made to the Ulster Council.