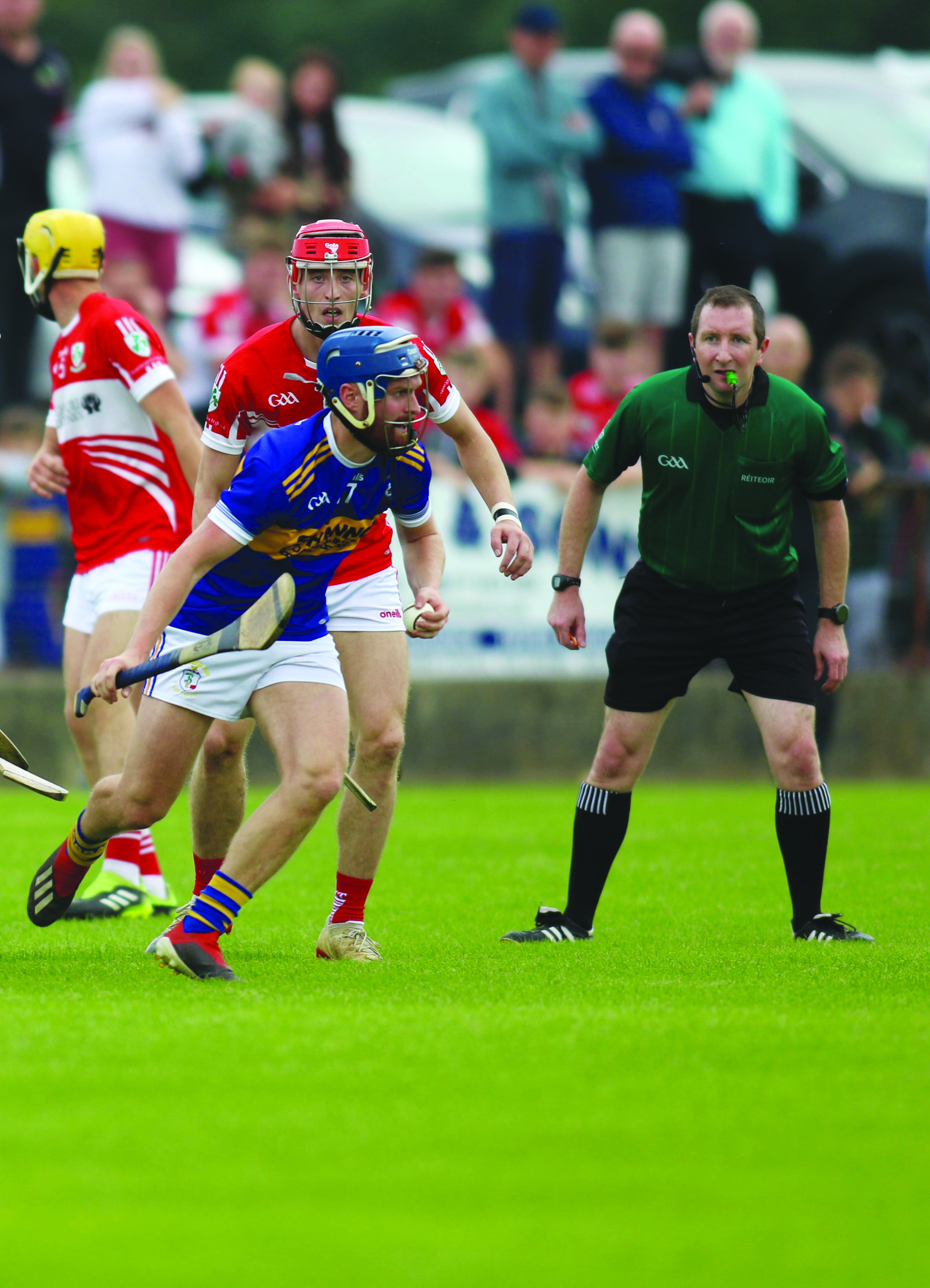 James McNaughton keeps an eye on Dara Rocks during last year’s meeting between the teams in Loughgiel that was won by Rossa, but Sunday’s quarter-final is a different scenario with both teams hoping to prolong their season

WITH the jockeying for position now complete, it’s now the business end of the Antrim Senior Hurling Championship and at Dunsilly on Sunday evening, O’Donovan Rossa and Loughgiel will lock horns with a semi-final against Cushendall up for grabs.

The round-robin series was all about getting to the knockout stages and here they are, so there is no more margin for error as defeat will spell the end of the season for the vanquished this weekend.

Rossa had the opportunity to bypass the quarters when they faced Dunloy in their final group game a fortnight ago, but came up short against the defending champions after earlier victories in the competition against Carey and Ballycastle.

In contrast, the Shamrocks entered their final round game at home to Naomh Éanna needing a result to stay alive in the competition having fallen shot against St John’s and Cushendall previously, but it’s a clean slate for both teams on Sunday as it’s all about the next game in the race for the Volunteer Cup.

Loughgiel won the league encounter between the teams earlier in the year, but that was then and knockout hurling is a completely different animal with both teams knowing it’s all or nothing when the ball is thrown in around 5pm.

“We are happy enough with the way we have been progressing this year,” said Rossa manager Sean Shannon.

“It was a patchy league campaign and we lost to Loughgiel up there, but we had six U20s playing that night and it will be a very different game for both teams this week.

“They were stronger that night but the league and championship are completely different and you can’t really judge anything from then when it comes to now.

“Things are moving along nicely for us this week so we’ll just see how it goes for the lads after a bit of a hectic run playing both hurling and football, but it would be great to get into another semi-final against Cushendall.”

Rossa overcame Loughgiel in Fr Healy Park during last year’s Championship in the group stages, running out four-point winners and will take huge confidence from that game.

But again, that was a group encounter and a different scenario from the cutthroat nature of knockout hurling, so there will be no safety net this weekend.

The North Antrim men are in a bit of a rebuilding phase but have some really exciting prospects beginning to break through like Christy McGarry to compliment many of the experienced heads who have been in fine form this year including Maol Connolly, Tiernan Coyle, Shan McGrath, Dan McCloskey and Shay Casey.

Add in one of Antrim hurling’s marquee figures in James McNaughton and the Shamrocks are in fine shape for an assault at the big prize again this year, so Rossa will know they have a huge task on their hands if they want to get back into the semi-finals for a third successive year.

The city side will be without Michael Armstrong who ruptured his ACL during the club’s football quarter-final defeat to Creggan that was played in obscene conditions, while there are a few niggles within the squad.

Stephen Beatty lost his appeal of the red card he was flashed at the end of the game against Dunloy in what was argued to have been a case of mistaken identity, so he will also be out which is a huge blow.

County star Gerard Walsh will be central to their hopes and he could well be the man tasked to go up against McNaughton, while Aodhán O’Brien will hope for a good day with the frees.

They will bring high energy as always and have plenty of attacking threats themselves, the pace of Thomas Morgan a potential headache for any defence.

This is a game that many find too close to call and it may be a cliché, but no less true that it will come down to whatever side manages to deliver over the course of the hour and little is expected to separate them come the final whistle.

“We have a couple of injuries, but we are in good form and everything has been going well in the build-up,” Shannon added.

“It’s just all about the next game at this stage and trying to keep your season going.

“We’re into the knockout stage so whatever has happened before is gone and we’re just looking forward to a good game this weekend.

“It’s always going to be a good game against Loughgiel because they love their hurling and we expect it will be close and well contested. Everyone knows each other well at this stage so there are no surprises.

“Hopefully we get the weather this weekend! It’s always tough going on both fronts, but it’s just something we have to deal with and all our focus is on this weekend.”