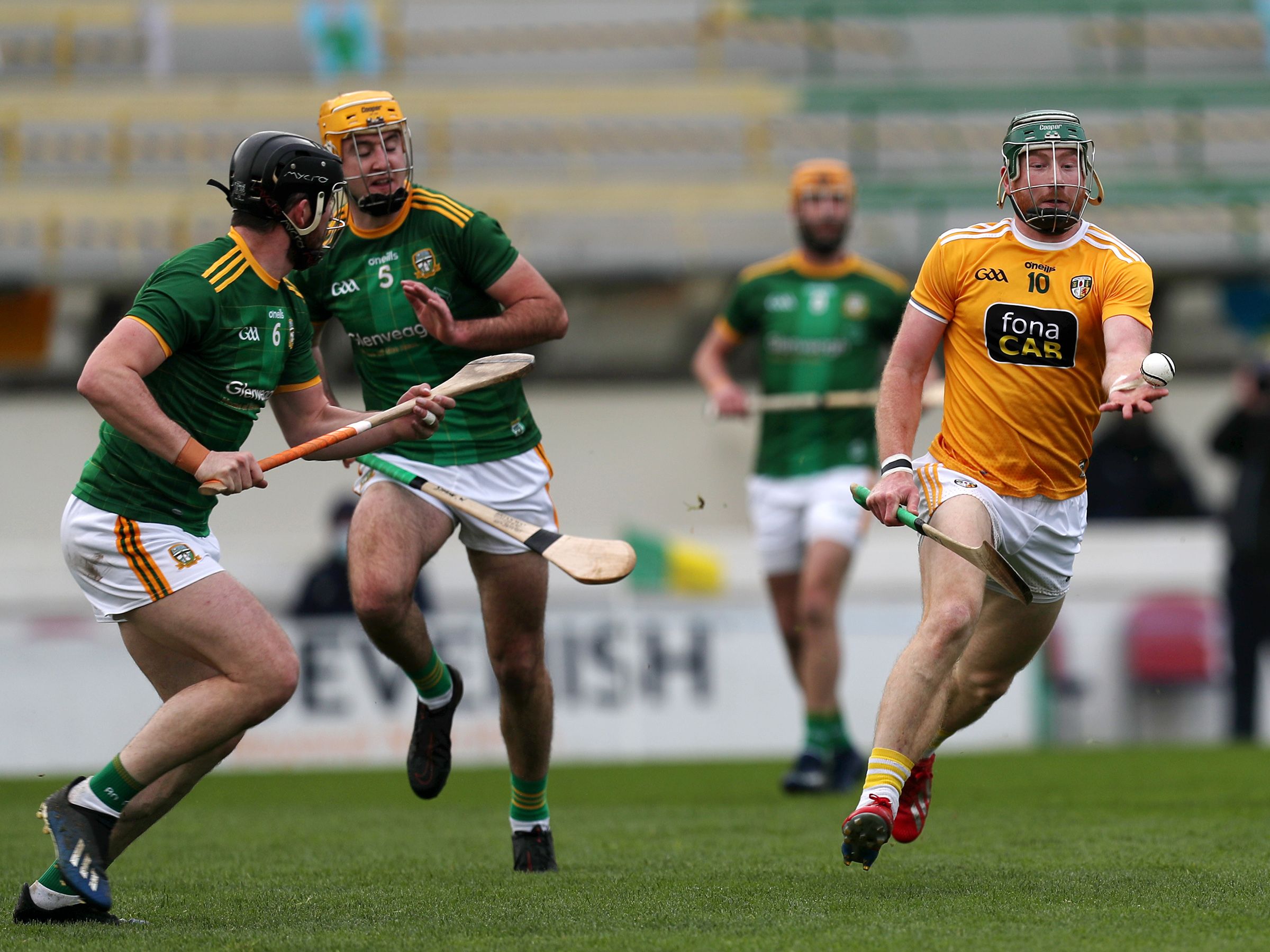 ANTRIM will hurl on All-Ireland final day in Croke Park - that has a nice ring to it.

It may have taken the Saffrons a little while to get into their stride at a chilly Páirc Tailteann in Navan on Saturday, but when they did they stormed to a comprehensive victory over Meath that seals their place in the Joe McDonagh Cup final.

Going into the game, the Ulstermen knew they simply had to avoid defeat to progress but did it in emphatic fashion after a shaky opening quarter.

Niall McKenna's 25th minute goal proved to be the turning point in a game that had seen the hosts move four clear at that stage, but once McKenna rattled the net, the Saffrons didn't look back.

A fourth meeting of the year against Kerry now lies ahead at Croke Park in two weeks' time and Antrim manager Darren Gleeson was delighted that his side overcame early jitters to prove their worth and reach the Croke Park decider.

"You could see in the early part of the game that there were nerves in the boys as you are there going: let's not have a catastrophe, a 2020 or whatever you want to call it and drop a 27-point (scoring difference) position," he said, alluding to Carlow who needed a favour and a huge win that was to prove beyond them in defeat to Westmeath.

"That was there no matter how many times you say it. Lads are thinking about tables and things like that but at the (first half) water break we just said to the lads to throw off the shackles and go for it. They did and hit a purple patch there before and after half-time and that was impressive."

The hosts were much sharper in the opening quarter and after an early exchange of points, James Kelly found the net for Meath as dipped past Conor McAllister and into the net.

The sides were level again on 11 minutes but Meath just seemed that bit sharper in the early stages with these efforts rewarded to move three clear before Michael Bradley announced himself on this game with a score just before the water break as Meath held a 1-5 to 0-6 lead.

Bradley would pick up where he left off with a run and score and after an Alan Douglas point from Meath, it was decided that an effort from Keith Keoghan that was waved wide prior to this had indeed gone over and was to count as Royals moved four clear.

Antrim's response was emphatic and the spark they needed would arrive on 25 minutes as McKenna burst in on the left, swapped passes with James McNaughton and cracked low to the net.

That sparked the Saffrons to life and they would take over, holding a 1-13 to 1-9 lead at the half with Bradley hitting another three points to make it five in the opening period in what was a man-of-the-match display where he scored eight overall.

McNaughton, Campbell and Clarke added points early in the second period before Meath seemed to grab a lifeline when Stephen Morris blasted low to the net from outside the 20 metre line.

This was a false dawn for The Royals as they were absolutely outplayed for the remainder as Antrim moved 2-22 to 2-9 ahead at the water break thanks to a Dan McCloskey goal when he deftly took down a high ball in stride that saw him through and he made no mistake.

They piled on the agony down the stretch as Nicky McKeague's floated effort ensure they raised an impressive 30 white flags and whilst Damien Healy blasted a 20-metre free to the net for Meath deep in stoppage time, this was mere consolation as Antrim coasted into the final.

"The prize (in the final) is whoever wins is going into the top tier of hurling and you can't quantify that as it's where we all want to be," added Gleeson.

"In this competition (previously), Antrim have had some great starts and faded, had some massive results and didn't get to it (final).

"You remember coming out of Tullamore last year when we could feel we were on the cusp of getting to that big day but it didn't happen. Now we're there, you have to come out with the cup."