GERRY ADAMS: Are you listening to our voices, Micheál? 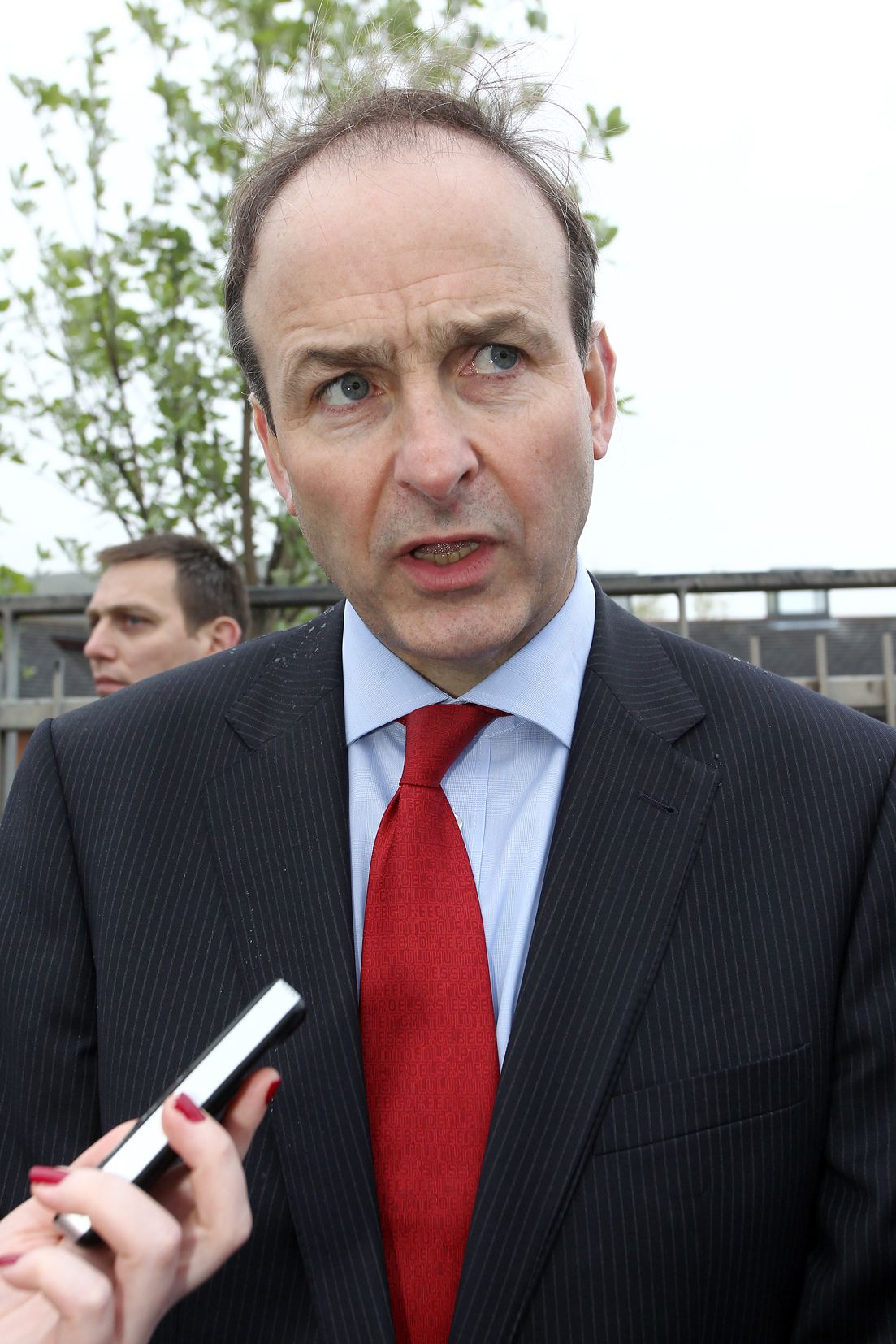 AN IRELAND THAT STOPS AT THE BORDER: Taoiseach Micheál Martin

MICHEÁL Martin’s ‘Shared Island Unit’ is perceived by some as a positive initiative encouraging debate on Irish unity, even though he fails to even mention unity in any of his utterances. For others it is a distraction. A talking shop that is short on strategy and lacking in vision. A means of pretending to be doing something while in fact doing as little as possible. And a way of avoiding taking the big steps necessary to plan for a referendum on unity, or mapping out what the shape of that new Ireland will be if the referendum succeeds.

My own view is that United Irelanders should engage positively with An Taoiseach’s Shared Island Unit but in full knowledge that it falls very far short of what Micheál Martin should be doing as part of his constitutional obligations and the imperatives of the Good Friday Agreement. In fact, An Taoiseach is wilfully involved in the politics of illusion. But that should not come as a surprise to observers of his politics.

Despite Martin’s reluctance to be a persuader for unity or to plan for a unity referendum the debate around Irish unity has been intensifying. In recent weeks several important papers have been published by influential academic institutions and by Ireland’s Future. All of them highlight the need to plan for a referendum and to plan for unity and that this needs to commence now.

The Ulster University published ‘Deliberating Constitutional Futures’ which examines the arguments around possible constitutional futures, including a unity referendum. Two weeks ago the Constitution Unit of University College London published an interim report from its ‘Working Group on Unification Referendums on the Island of Ireland’. The report addresses the issue of what will constitute a winning vote. It states that the threshold for the unification referendum in the North is “a majority of the people of Northern Ireland voting in a poll”. It would breach the Agreement if a higher threshold than 50% + 1 was required. In the South, approval of constitutional referendums likewise requires a simple majority.”

Critically the report authors highlight the danger of any failure to plan for a unity referendum. They state: “The years of acrimony following the UK’s vote on EU membership in 2016 illustrate the dangers of a vote called without adequate planning.” As part of this process of pre-planning the report calls for Citizens’ Assemblies to be established to help identify peoples’ views on what choices should be on offer in any referendum.”

It adds: “All these criteria point towards the importance of advance planning: of the referendum processes; and about the shape of a united Ireland, or a continued Union.”
Is Micheál Martin listening? This conclusion is in direct contradiction to his refusal to plan for the time ahead.

Last week Ireland’s Future – an influential group of civic nationalists – published a discussion document entitled: ‘The Conversation on Ireland’s Future. A Principled Framework for Change’. The paper deals with a series of key questions regarding the unity referendum process and as part of its launch Martina Devlin interviewed Professor Colin Harvey of Queen’s University. The interview is hugely informative and is still available online.

And like the report from the Constitution Unit, the Ireland’s Future group “place emphasis on advance planning and the need for an evidence-based and informed debate. That is why we have suggested an all-island Citizens’ Assembly to underline the centrality of civic leadership in preparing the ground for change.”

So, planning for a unity referendum and planning the shape of the new Ireland that will emerge out of this process should begin now. As Ireland’s Future say: “There is no contradiction between making the (Good Friday) Agreement work, in all its parts, and planning for the referendums that will determine the future of Ireland. Those who continue to label this process ‘divisive’ and ‘dangerous’ are simply encouraging the spread of fear and anxiety.”

As part of Sinn Féin’s contribution to this growing debate we recently published a discussion paper on the ‘Economic Benefits of a United Ireland’. It addresses many aspects of the current and future economic direction of Ireland and it specifically punctures the claim that a united Ireland is not affordable or viable.

Is Micheál Martin listening? I suspect not. He so wrapped up in a belief of an ‘Ireland’ that stops at the border that he cannot see the enormous opportunities that will open up for all the people of this island through reunification. However, whatever Martin’s attitude the conversation on Irish unity is not going away. The academic papers I have referenced are only the beginning. They are already seeking public feedback. And they and others will continue to focus on reunification in the time ahead.

The debate on unity is also being driven by the increasing realisation that partition has failed the people of the island of Ireland and by the shambles around Brexit and the recognition that a single island response to Covid-19 would have saved lives. So, if you believe in a United Ireland – in a new shared Ireland which embraces every citizen on the basis of equality – join in the conversation.

Incidentally I would love to know how the SDLP’s New Ireland Commission is getting on. Colum Eastwood’s promise to create a forum to discuss future constitutional arrangements could contribute significantly to the national conversation. Maybe he will give an update?

According to the media speculators and commentators, this week is the endgame for the Brexit negotiations. However, they also said that two weeks ago. A month before that the spin was that the British and EU negotiators were “down to the wire’. This deal/no-deal crisis has been ongoing since the 2016 referendum decision by England and Wales to leave the EU. (It should always be remembered that the North and Scotland voted to remain.)

I have lost track of the number of deadlines that have been broken this year alone. Two weeks ago the EU gave the British 48 hours to amend their stance or see the process fail. Then the British threatened to walk away. Clearly both sides are hard-balling. It’s the sort of negotiating tactics that successive British governments frequently used during the years of negotiations leading to the Good Friday Agreement and subsequent agreements.

Two weeks ago queues of trucks stretched for over five miles in the Kent countryside in south east England trying to travel on to the Continent. French authorities had decided to dry-run new immigration procedures that will come into effect on January 1 when Brexit officially kicks in. And the big issues remain around fishing, governance and state aid to industry.

At the same time there were media reports about the difficulties the North might face in bringing in food from Britain – particularly unfrozen mince and sausages. A big argument for carnivores to eat only Irish sausages and mince. In fact buy Irish all the time. And shop locally.

On Sunday, a British government paper dealing with the “reasonable worst case scenario planning assumptions” arising from a no deal outcome were leaked to the media. The 34-page document warns among other things that if the Brexit talks collapse  there could be a reduction in the availability of medicines; protests and counter-protests will take place; and there could be "reduced [food] supply availability, especially of certain fresh products" and "supply of some critical dependencies for the food supply chain... could be reduced".

Whatever the outcome of these negotiations – deal or no-deal – the end result will still be bad for the island of Ireland. In a response to questions from Sinn Féin TD John Brady about the impact of Brexit, and the British government’s Internal Market Bill which will breach international law, the Minister for Foreign Affairs Simon Coveney acknowledged that along with the North’s Human Rights Commission, the Irish Human Rights and Equality Commission, as well as a number of civil society organisations, the Irish government shares their concerns that the Internal Market Bill risks undermining the “Good Friday Agreement commitment to ensure incorporation of the ECHR, and risk diminishing the commitment to ensure there is no diminution of rights, safeguards or equality of opportunity as the UK leaves the EU.” So, the crisis around Brexit heightens; the threat to the Good Friday Agreement continues; and the conversation around the optimistic outcomes arising from a united Ireland intensifies.