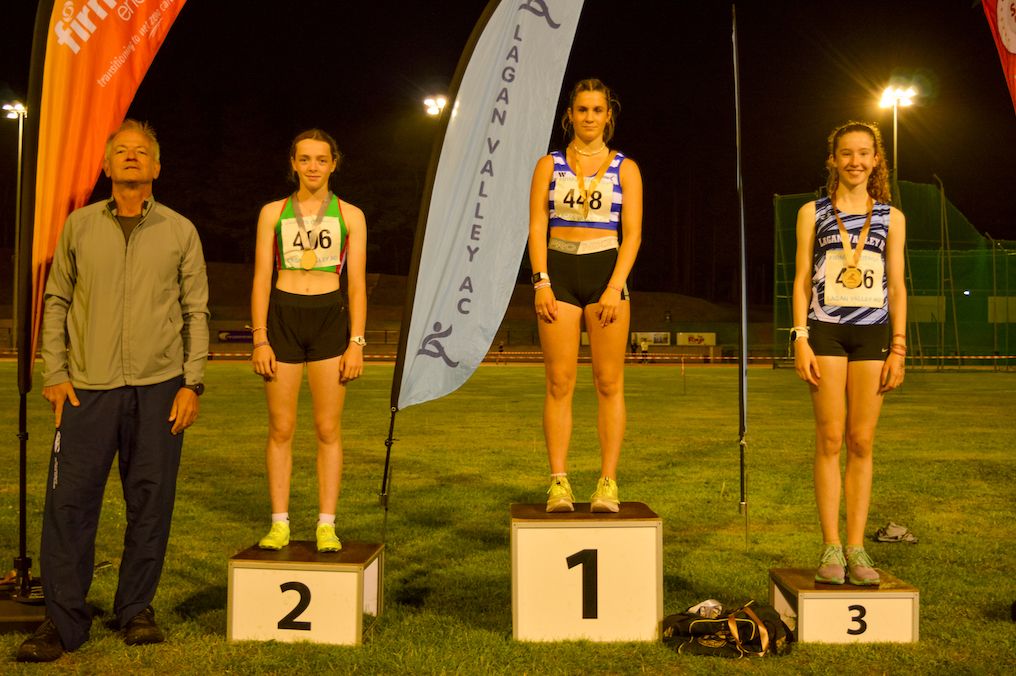 Northern Ireland’s largest athletics competition, firmus energy Fab 5, returned for the fourth event in the series at the Mary Peters Track in Belfast.

The event, which focused on track and field events, saw impressive performances in a range of disciplines, including the Senior 400 metres, one-mile middle distance and the 800-metre wheelchair race.

Cheering the athletes on was an enthusiastic crowd, who were rewarded with some record-breaking performances in the Senior 200 metres and the U13 Girls Mile.

West Belfast was represented on the podium by Beechmount Harriers AC’s Ava Diver, who was competing in the middle distance U15 Girls Mile.

In what was a tightly fought race, she was narrowly pipped to the post by Jodi Foster (Willowfield Harriers) who pulled ahead in the final stretch to win with a time of 05:20:00. Diver took silver for her efforts, finishing in 05:23.60, with Olivia Morgan placing third with a time of 05:24.30.

Among the standout performances on the night was that of Craig Newell. The former Northern Ireland 400m Champion produced a lifetime best of 21.58 seconds in the 200 metres, the fastest by a Northern Ireland athlete this year.

He was joined on the podium by James Armstrong who finished in second place with a time of 23.20 seconds, and Niall Flanaghan who completed the race in 23.58 seconds to take third.

Spectators also saw an epic performance from Olivia McCusker (Loughview AC) in the U13 Girls Mile, who stormed to victory with an impressive time of 5:19.97 to go to third in the British rankings, finishing almost 20 seconds ahead of second-place athlete Claudia Coyle and bronze medal winner Madison Welby.

The series, organised by Lagan Valley Athletics Club, returns for the final event in the series which takes place on September 1 at Marys Peters Track.

“After a pause in the series during the summer break, it was fantastic to welcome back athletes from NI and beyond to the penultimate event in the Fab Five series,"
said Jemma McKee, Energy Advisor at firmus energy.

"This year’s series has been a huge success after a two-year hiatus during the pandemic. We’ve seen record participation in the event from athletes, as well as local and international records being broken by our homegrown talent.

"The final event in the series promises to be a big one, so I would encourage any athletes interested in getting involved to get signed up on the Athletics NI website”.

The highly competitive series, which is sponsored by natural gas company, firmus energy, attracts athletes from across Northern Ireland and Ireland and offers disciplines suitable for all abilities and ages.  The next event in the series will focus on various track and field disciplines including short and middle-distance running, the high-jump, long-jump, and the shot putt.

Lagan Valley Athletics Club President, John Glover added: “What a return for the penultimate event in the Fab Five series.

"We saw some great sporting performances put in by athletes of all ages, with two record-breaking performances on the night. Olivia McCusker of Loughview AC provided the best performance in the middle distance events, extending an almost 20 second lead against her competitors to take home a gold medal and third place in the British rankings.

“The best performance in the sprints however was that of Ballymena and Antrim’s Craig Newell. The former Northern Ireland Senior 400m champion produced a lifetime best of 21.58 seconds, the fastest by a Northern Ireland athlete this year.”

Since its debut in April 1991, the series has provided a platform for many local aspiring athletes who have gone on to represent Northern Ireland, Ireland and Great Britain and NI at international level across a range of disciplines.

Online registration for the final event in the firmus energy Fab 5 Series is now open.  For more information and to register for the event, visit www.athleticsni.org/Fixtures/Firmus-Fab-5-Meets