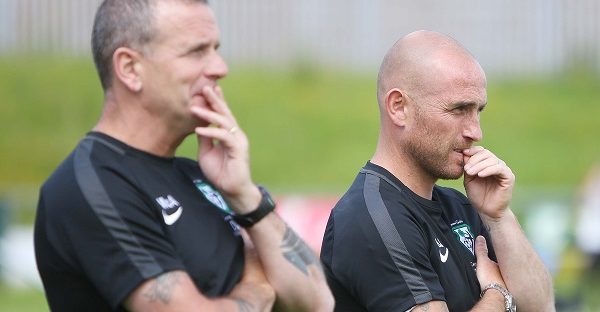 BELFAST Celtic and St James’ Swifts will consider their options before launching any appeals following on from the decision to award Dunloy FC the coveted Ballymena and Provincial League title.

The league winners have an opportunity to move into the Premier Intermediate League – the third tier of local football.

However, Dunloy will require an extension from the IFA regarding the deadline for getting their home ground up to standard.

Following a series of votes, the decision to award the North Antrim club the title after finishing the season on a points per game average has angered their West Belfast counterparts, who were challenging for the crown.

Belfast Celtic chairman Jim Gillen has suggested that the club will launch an appeal to the IFA and has queried why the Ballymena League have reached their decision before many other local football leagues have decided the best way of concluding the 2019/20 campaign.

“If you look at the first round of voting, the majority view was clearly to void the season. They claim it was done on a democratic basis, but they’ve removed that option from the subsequent votes,” stated Gillen.

“All we can do is appeal to the IFA. If the IFA are going to finish the Premier Intermediate League, then why can’t we finish the Ballymena League?

“It is the same standard. It isn’t as though we are reliant on council pitches – we all have our own grounds.

“You can very tightly control who goes in and who doesn’t go into your ground.

“We are looking to see what options are open to us at the minute, but we certainly aren’t happy with this decision. To me, it goes against everything in a sporting sense.”

Gillen stopped short of saying that Belfast Celtic would consider their position in the league, but reiterated his view that the club are being punished for succession of cup runs this season which included reaching both the semi-finals of the Steel and Sons Cup and the Intermediate Cup as well as the fifth round of the Irish Cup.

St James’ Swifts are also in the semi-final of the Intermediate Cup and joint-manager Barry Johnston hopes the IFA will find space to complete that competition at least.

“We’d be hopeful, if they are going to play the Irish Cup semi-finals, that they could squeeze us in. It wouldn’t take make to play the games over two Saturdays, the semi-finals and final,” said Johnston.

“Our players are just training away themselves and preparing for a semi-final. It is juts hard to keep them motivated now knowing that the league has made that decision to award the title to Dunloy.

“Ourselves (St James’ Swifts), Belfast Celtic and Dunloy get on well, there’s a rivalry there but there is a respect too and we all wanted to finish it on the pitch.

“It is unfortunate, in these circumstances, that it can’t be continued. They’ve made the call, and it is a brutal call as far as we are concerned, but at the end of the day the powers that be made the call and we have to live with it.

“The IFA and NIFL haven’t made a decision on the Irish Premiership and the Irish Cup yet. We obviously don’t have the same crowds or the same staff, so it seems strange that they would call it this soon when we have limited crowds at our matches.

“You might see the Irish Premiership up and running later this summer, so it seems strange that our league have made this decision.

“It is frustrating because ourselves, Belfast Celtic and Dunloy all felt we could win the league. Dunloy are at the top on merit and, if that is how the league is to finish, we congratulate them.”

Johnston added that it would be up to the committee of St James’ Swifts to decide if they wish to join Belfast Celtic in any possible appeal, but stressed that no decision had been made yet.

However, Ballymena and Provincial League secretary Billy McIlroy has vigorously defended the process which saw Dunloy crowned Intermediate champions and rejected the notion that a play-off between the main challengers would have been a better alternative.

“For starters Dunloy or Belfast Celtic never mentioned a three-way play-off to us,” said McIlroy.

“The only team that voiced it was St James’ Swifts, but how could you have a three-way play-off between those teams? One is sitting seventh in the league and another is in third?

“How could you decide that the league is between those teams and not Wakehurst, for example, who are in second? You can’t assume anything in this world. Teams might think they can do this and that, but you can’t assume result will go a certain way or that a team will win so many matches.

“There was no hurry on it, but we made a democratic decision. It wasn’t the chairman or the vice-chairman of the league who made the decision, it was the teams.

“We got a letter from the IFA to start off with and they wanted our views on how we could conclude the season.

“I put a questionnaire out to all the team and we worked on the replied we got. “We had a majority of teams who voted, in the first instance, to void the season – but you can’t void the season. You’ve had the English FA tell the Premiership that this week. Once you void a season, you’ve no winners. Your season didn’t happen. All the fines and fees that have been paid, all that money would be paid back. UEFA hit that on the head when the said that leagues who void their season cannot play in Europe next season.

“We then asked clubs if the wanted to apply for extension to the season but the games had to be played by the end of July.

“Out of 14 Intermediate teams, 10 voted not to extend the season. The next question was then how to decide the end of the league? It was to settle the season with the standing as they were on March 7 or to go the points per game average. The first letter we got from the IFA stated that, if you are going to award titles, you do to do so through sporting merit, that came from UEFA. The majority voted for option two so it was the members of our league made the decision.

“Irrespective of people’s opinions, it was our members who made the decision.”

McIlroy said he respected that not everyone would agree with how they’ve ended the season and is aware that appeals may follow, but stressed that the league have made transparent from the beginning of the process.

“We’ve followed protocols as best we could. I’d be surprised if there was a league in the land that had a ruling on what to do in a pandemic. I know some teams won’t be happy and I understand that and they have the right to appeal the decision, but I’m confident that the decisions we’ve taken as a league will stand up to scrutiny.”