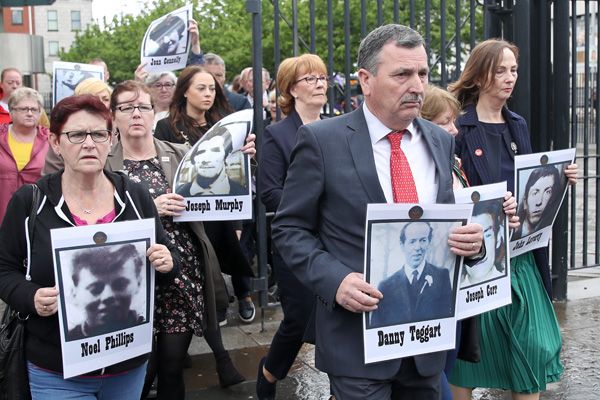 A MAN bereaved through Ballymurphy Massacre has called for arrests following revelations that findings of an inquest into the killings has been referred to the Public Prosecution Service (PPS).

Last May, a fresh inquest found that ten people murdered by the British Army in Ballymurphy in August in 1971 were "entirely innocent", and their killings "unjustifiable".

Lady Chief Justice Siobhan Keegan, who oversaw the inquest, sent a copy of her findings and verdict to the PPS Director, Stephen Herron, last Tuesday.

The Ballymurphy Massacre took place when the British Army’s notorious Parachute Regiment entered the West Belfast estate in the wake of the introduction of internment.

John Teggart, whose father Daniel Teggart was amongst those killed, said there has yet to be "a proper investigation".

I would hope, and we would demand, that there is a proper investigations," he said.

"50 years later there are still questions to be answered. There was an inquest that had limited powers. We got what we had wanted because it declared our loved ones entirely innocent – something we already knew. We brought the evidence to overturn the lies, but there still needs to be an investigation.

"There were soldiers that never turned up to the inquest and actually refused to turn up. I would hope that powers would be used to arrest these soldiers and bring them in for questioning. The PPS and other agencies that work with the PPS will have powers of arrest and I hope these soldiers will be arrested under caution."

He described arrests for murder of the victims – or any other crimes perpetrated during the course of the massacre – as the "proper thing to do".

"We had hundreds of bullets fired by the military in August 1971 and 11 people were killed," he said.

"There was a crime committed. Somebody murdered our loved ones. It didn't come out at the inquest, but certainly I want it to come out in this investigation."

Mr Teggart expressed hope that the doors of those responsible "will be knocked".

"I hope they have a lot of sleepless nights," he said. "The Ballymurphy Massacre families aren't finished – there's still work to be done and we're taking that work in hand."

Padraig Ó Muirigh, who reprsents a number of the Ballymurphy Massacre families, stated: "It is clear from the evidence provided at the inquest and the subsequent Coroners findings that criminal offences were not being committed by those innocent civilians shot dead, but rather by those British soldiers who should have been protecting the Ballymurphy community.

"It is imperative that the Director of Public Prosecutions promptly and thoroughly investigate the actions of British soldiers at Ballymurphy."