Barnes confident he has the skills to claim first pro title 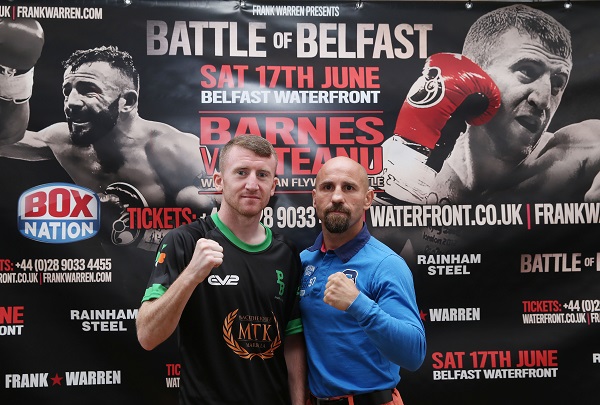 PADDY Barnes believes his greater skills will be the deciding factor when he tackles Silvio Olteanu at the Waterfront Hall tomorrow night.
It may only be the North Belfast man's third professional contest, but his vast experience of amateur boxing at the elite level has given him the confidence that he can break into the WBO's top 15 by claiming the organisation's European flyweight strap against the vastly experienced Romanian who has been a European champion and narrowly lost out for the WBA world title against Japan's Daiki Kameda back in 2010.
Both men weighed-in under the flyweight limit, with Barnes slightly heavier at 111.9 lbs to Olteanu's 111.4lbs, when they took to the scales at the Ulster Hall earlier and the two-time Olympic medallist believes getting down to the championship weight will result in a sharp performance in what is his first proper test since switching to the paid ranks.
"The first few fights I could weigh-in whatever I wanted to, so this is my first time making the championship weight," he said after stepping off the scales.
"I always feel at my sharpest when I'm on the weight so tomorrow that's going to make me punch better. I always perform better when I have to make the weight.
"This isn't like the Olympic Games where I had to fight a few hours later (after weighing-in). I have a full day to recover here."
Barnes admits his first two professional bouts have been frustrating given his opponents, Stefan Slavchev - who was disqualified for picking him up over his shoulder - and Adrian Dimas Garzon turned up to spoil rather than win.
"I was able to box more (against Garzon)," he explained.
"I didn't try to blast the fella out in the first round. I probably could have stopped him if he wasn't covering up so much so I just just boxed.
"I didn't learn too much from my first two fights. I learned a lot more in sparring. I've been sparring Ryan Farrag who was the European bantamweight champion. I have improved sparring him, so I hope it shows on the night."
The switch from the shorter, high-paced amateur bouts to the longer, slower-paced professional can take a period of adjustment, but Barnes believes he is ready and the fact he is fighting for a title that gives a world ranking after just three fights highlights his eagerness to fight the best as soon as possible and his confidence that he can mix it at the highest level already.
Certainly, his incredible amateur record shows he has the skill-set to take on the best in the world and he believes this will be the difference when the bell rings tomorrow night.
Olteanu has had 12 previous title fights against top opposition so is well used to boxing 10 rounds while Barnes has not been beyond six, bit the 30 year-old known as 'The Leprechaun' dismisses the notion this will be a factor.
"It's all about pacing myself," he explained.
"At the end of the day, I can pace myself all I want, but I'm a better boxer than him and have more skills. Hopefully I can just do what I want.
"He has been here before, but no matter how much experience he has, if someone's better than you, they're better and I'm better than him."
The 39 year-old visitor will view this as his last chance to get back into the world title mix so is sure to leave it all in the ring tomorrow night, but Barnes has his own ambitions with victory putting him on the ladder to face his old nemesis from the amateur days, Shiming Zou who holds the WBO world title.
That in itself is the real prize on offer tomorrow and is sure to result in a rip-roaring contest, but Barnes is convinced there can only be one winner.
"If this fella was to win, it gets him straight back into the mix having already fought for a world title, so it's high stakes for both of us," he acknowledged.
"But there's only one man who's going to get there (into the WBO rankings) and that's me."