Barnes confident he has the tools to take Rosales' crown 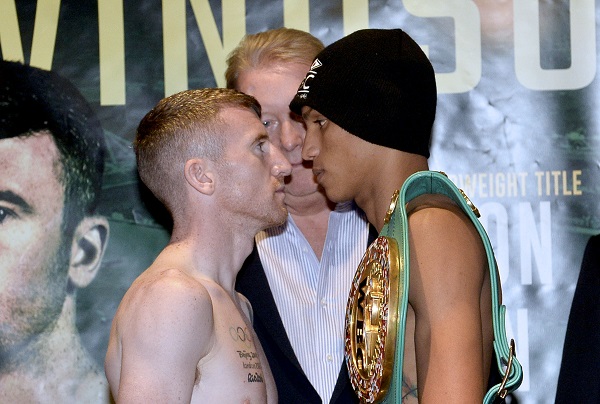 PADDY Barnes will not rise to Cristofer Rosales’ bait when he challenges for the Nicaraguan’s WBC flyweight title tomorrow night at Windsor Park (first fight on the live BT Sport broadcast at 7.45pm).

'The Leprechaun' made the flyweight limit of 115lbs without fuss at today's weigh-in at the Europa Hotel, while Rosales was slightly lighter at 114.10lbs.

Despite this being just his sixth professional fight, the Cliftonville man has vast experience as an amateur and through the World Series of Boxing, so he laughed of Rosales’ claims that he is happy to let Barnes set the pace tomorrow night, in his typically forthright fashion.

“From the first bell he’s going to be a million miles per hour, I’m not stupid,” he predicts.

“That’s all he knows how to do. He can’t box on the back foot, but I’m a smart boxer and I know what the craic is.

“I’m a good boxer, so I know I can out-box him so it depends on how I want to do it.

“If he lets me dictate the pace then it’s going to be my fight because if I control the pace, I control the distance and there is no way I’m going to let that slip, so thanks mate.”

Rosales qualified that by telling Barnes not to run “like a wee chicken”, but anyone who has ever watched the 31 year-old North Belfast man in action in his career will know that is the opposite of his game, so it sets up an exciting battle.

Rosales is a come-forward, pressure fighter who will not let up for 12 rounds and two of his three defeats in a 30-fight career have come against top opposition such as current world champion, Khal Yafai and Andrew Selby.

The 23 year-old had travelled to Belfast full of confidence and he believes he is ready to score a first successful defence after winning the title in Japan against Daigo Higa back in April.

“I am used to fighting away from home and will have no problem here,” he said.

“In the ring, it’s only going to be me and Paddy so I’m here to retain his title.

“I know what I need to do to win on Saturday.”

It would be an historic win for Barnes who would become the quickest ever Irish winner of a world title should he pull it off.

His close friend and bill-topper, Carl Frampton is certain North Belfast will have another world champion come 9pm tomorrow.

“This is going to be a very good fight, but I’m backing Paddy,” said ‘The Jackal’.

Barnes of course is not a man for bells and whistles.

The fact this fight is taking place at a sold-out Windsor Park means nothing to him, but all that is in his mind is getting the job done and he says he has prepared diligently ahead of what would be a quite remarkable win given his brief time as a pro.

He and Rosales have a common opponent in Eliecer Quezada with Barnes doing the better job, scoring a sixth-round stoppage in November, sixth months after Rosales edged home on a split decision.

This gives him added confidence, but despite Rosales’ in-your-face relentless style, Barnes is confident he has more strings to his bow and will win by hook or by crook.

“I think it’s going to be a great fight,” he predicts.

“I’m in great shape and I’m just looking forward to getting this show on the road. I’ve had a long camp and now it’s all come to a head, fighting on Saturday night for the title I want to fight for.

“I have been training from when this fight was signed so I’m looking forward to it. I don’t care how I win, just as long as I do.”