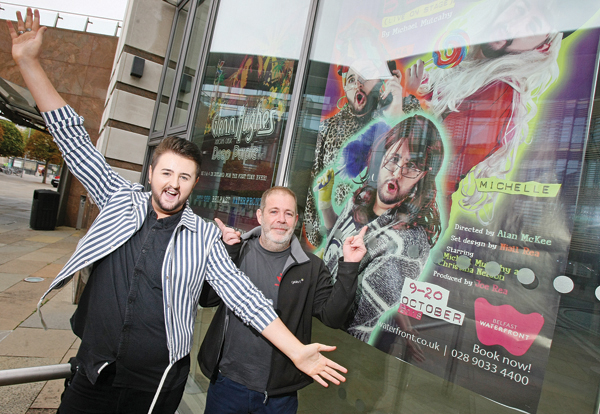 ONLINE sensation Belfast Girls is set to make the Waterfront Hall its home for a limited run next month and tickets are already going fast.
Written by and starring the West Belfast creator of the hit social media series of skits Michael Mulcahy, the show will feature classic characters including Big Bernie Greene, Michelle, Shankill Joe and Ma.
Michael, a former De La Salle College student, has been entertaining thousands of viewers via his social media Facebook page since Belfast Girls first made their debut back in 2016. Michael explained how the runaway success of his creation has seen views of up to 900,000 on the page, and that his characters are now set to come to life at the Waterfront in October.
“I grew up with three older sisters, I’m the only boy and the youngest so a lot of my inspiration has come from my family, I’ve seen and heard it all,” he laughed.
“The Facebook page has become so successful that it makes you want to do more, keep creating, keep entertaining people. I remember when I posted the first video and people were commenting underneath saying ‘more, more’.”
Michael’s only foray on the stage so far was “when I was in Primary Seven in St Kevin’s and I wore my mummy’s white skinny jeans to play the Angel Gabriel,” he laughed.
“I feel brilliant that I’m going to be performing all the characters for the first time at the Waterfront. I’ve never seen anything like this, like the following the site has, it’s crazy, but good crazy,” he said.
The show will be directed by Alan McKee, one half of comedic duo Grimes and McKee, and himself no stranger to the director’s chair.
“Joe Rea, who is producing the show, spoke to me about Michael and said ‘this guy is very funny, I think there is a show here’. I ran Michael’s page past the focus group of teenage girls in my house and they loved it, there are plenty of songs and dance routines for everyone to take part in.
“The fact we are putting on the show shows the power of social media, you can’t ignore that number of hits, that amount of likes and views.
“Michael has a great ear, he writes exactly the way people speak, warts and all. He is a really original voice.
“This is the first time I’m directing a piece that has come this way and it has really opened my eyes to look out for other things that don’t necessarily come via the traditional route, if it’s good people will pick up on it. It’s a version of word of mouth just how successful Belfast Girls has become which is the best publicity you can get.”
Belfast Girls will be performed at the Waterfront from October 9-20. For ticket information telephone 02890 334400 .