Boxing: Crocker marches on as McCrory, McComb and McGivern score victories on a big night at the Ulster Hall 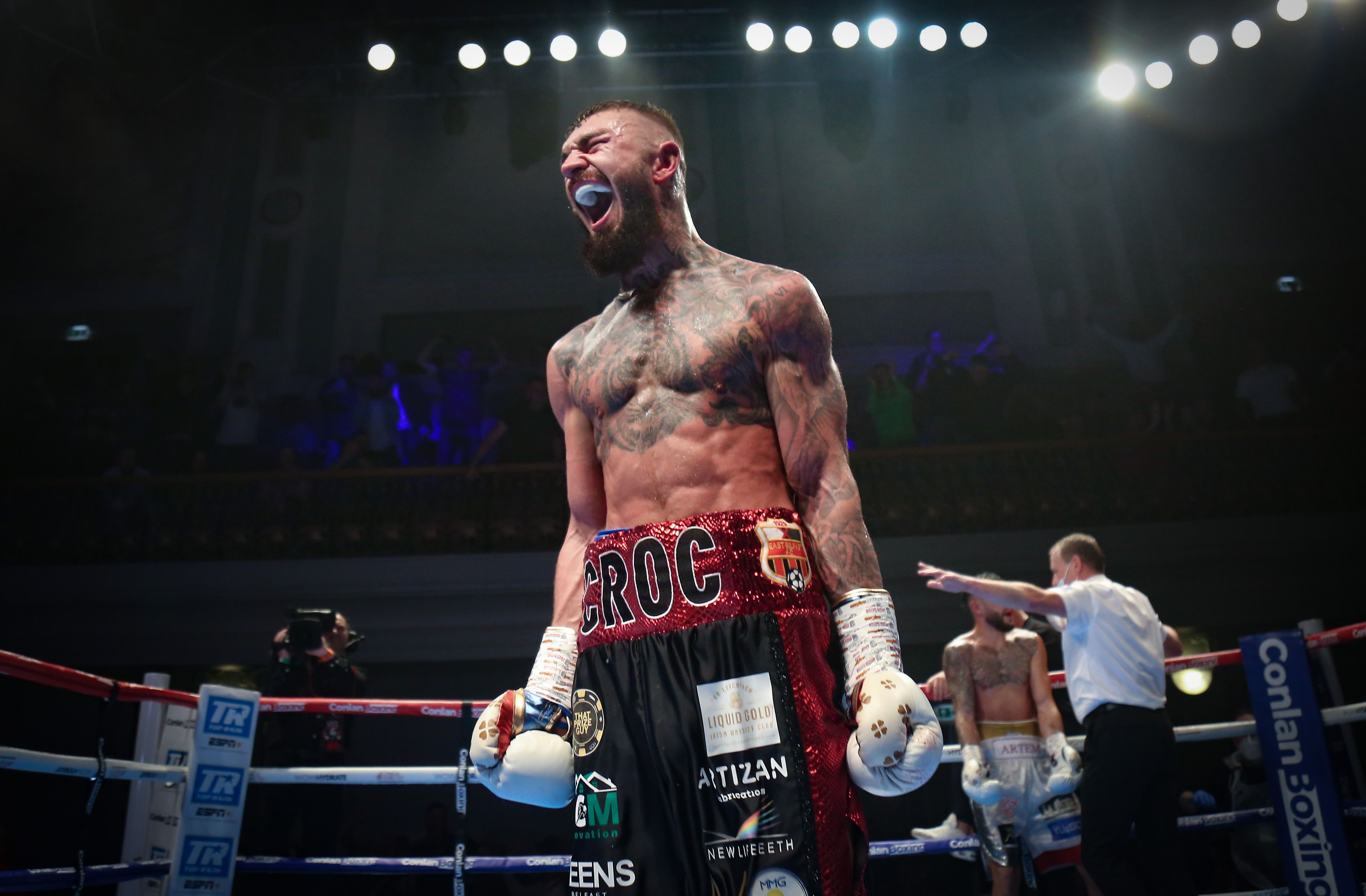 LEWIS Crocker again proved the hype is real as he produced a headline-worthy display to retain his WBO European welterweight title with a seventh round stoppage of Artem Haroyan on the Conlan Boxing show at a raucous Ulster Hall on Friday.

The 24-year-old South Belfast man was just too clever and powerful on the night, dropping the Armenian in the sixth and closing the show a round later as he improved to 14-0 and set-up what could be a very productive 2022.

Manager, Jamie Conlan floated the name of Florian Marku as a potential opponent in the near future and Crocker would relish a showdown with the London-based Albanian who holds the IBF Inter-Continental belt, but Crocker is also keen for a shot at the Lonsdale belt as his stock rose further following Friday's dazzling display.

"I wanted to give a good fight for the fans and make it as entertaining as possible," said the affable Sandy Row man after.

"It's in my vision to go for the British title next year and I believe I'm ready.

"The guy who holds it, Ekow Essuman, is a very good fighter and I think that would be a great fight for the fans.

"I'll just take it one fight at a time because this is just my 14th professional fight, I'm only 24 years of age, so "I'm still learning and picking up things in every fight, so hopefully there are some big nights in Belfast next year."

Crocker was at his aggressive best on the night as he found a way through Haroyan's tight guard and the meaty shots were beginning to make a dent by the third and after a quieter fourth, upped the pace again with a left hook scoring the first knockdown.

Whilst the visitor managed to see out the round, the writing was on the wall as Crocker went for the kill in the seventh with a flurry culminating in a left to the body that saw Haroyan down and out with the Ulster Hall in raptures as Crocker celebrated an impressive night's work.

"I was in control of it and I just feel that if anyone goes toe-to-toe with me, they will lose," he warned.

"I made it into a fight and got the result I wanted.

"I wanted to be patient because I know over 10 rounds I'm dangerous. He had a tight enough guard so I had to set traps and knew that in the later rounds I was going to get to him.

"There are still things I'd like to work on a bit more, but I'm looking forward to the next one."

****
Padraig McCrory produced another highlight reel KO as he defended his WBC International Silver super-middleweight title with a second round victory against Celso Neves.

The Portuguese native looked like he could make a fight of it in the first, but McCrory lived up to his 'Hammer' moniker with a brutal left hook just 15 seconds into the second dropping Neves heavily.

Somehow, the challenger managed to get on his feet, but another immediate short left had him down and out as the St James' man improved to 13-0 with this latest victory that took just 215 seconds.

"I feel great - this place is buzzing," he said after.

"What a shot to finish that fight. I think Neves came and fought in a way he hasn't fought before: he stuck it on me the first round, but the instructions were to get my hands up and throw with him and that worked.

"He is usually a slick counterpuncher, but he came to fight and threw with volume that I wasn't ready for.

"Dee (Walsh, trainer) said to jab with him and walk him down, which I did. I changed tactics (after the first) but I know I have the power to put anyone out. I wanted to put a show on and they (crowd) got a good first round and then a knockout.

"I want big fights (next). I'm 33 and moments like this won't be about for much longer."

****
Sean McComb says a move back up to 140lbs is likely despite impressing in victory over Ronnie Clark at lightweight.

McComb was quickly into his stride, landing some flashy combinations in the first and maintained that momentum in the second as he found his range off the southpaw jab that allowed him to follow with some meaty right hooks and lead lefts.

Clark was game as expected, pouring forward and was happy to take a shot to get his own off. Despite being dominated in the first two, the Scot enjoyed more success in the third and began to find the target although McComb remained busy in a closer round.

The Turf Lodge man responded to the challenge perfectly, using his movement to quell the uprising and landed with a sharp combination.

He was just too big and quick for the Dundee man to have any real success and any time he did enjoy some moments, McComb was quick to retaliate.

The seventh was a thrilling round as Clark continued to push forward looking for a way to make a dent in McComb with some heavy shots, but to no avail as the West Belfast man just landed with better as got through with a rapid combination.

Clark was as game as expected in this fight, remaining competitive to the last and was able to absorb the punches coming his way, but he couldn't get real momentum to take charge and in the end, McComb was a very worthy winner on Hugh Russell Jnr's card (79-74).

"It's great to be back on home turf," said 'The Public Nuisance'.

"I know I fought at Féile, but this is a different type of atmosphere. The Belfast fans are class - it's unbelievable.

"What we worked on in training camp was to stick to boxing and don't get involved. It's very hard and that's going to be hard at times when you land a punch and the crowd is behind you looking for more. For me, it's about taking my time and picking my punches and I believe I showed that.

"Ronnie is a tricky operator who comes to fight and to win. He has serious wins on his record, a former European champion with a wealth of experience and he showed that tonight.

"I think I will move up to super-lightweight and take any opportunity given to me - hopefully a title fight, any title fight."

****
James McGivern improved to 4-0 as he out-boxed Russia's Rustem Fatkhullin over six rounds at lightweight to claim a 60-54 win on referee Eamonn Magill's card.

The 23-year-old Ormeau Road man settled into the contest well, boxing with patience and precision against a naturally heavier opponent as he targeted the body well out of his southpaw stance.

Fatkhullin came to fight and did enjoy some success, but 'The Natural' was simply quicker and slicker, controlling the pace and dictating terms from the centre of the ring.

McGivern set some nice traps, leading with he left and connecting with an excellent right in the fifth, but the Russian absorbed he shot well and was up on his toes.

Still, it was the South Belfast man who was in complete command and he was delighted to claim the win in a venue that has now seen him victorious as a pro and an amateur.

****
Owen O'Neill had to be content to box in a four-round exhibition as his planned fight against Jordan Latimer fell through when the Manchester man simply didn't show up.

It was a huge disappointment for O'Neill who had been ready to take on a foe who had talked the talk in the build-up, but when it came to it, didn't travel and left the Cliftonville man high and dry with his record still at 7-0.

Elsewhere on Friday's card, Meath's Cian Lewis picked himself up off the floor twice in thew opening round to face a draw (37-37) against Juan Yin; Dublin's Paul Ryan demolished Damian Esquisabe in one round, whilst Cork's Danny Keating was a points winner over Jack Ewbank.