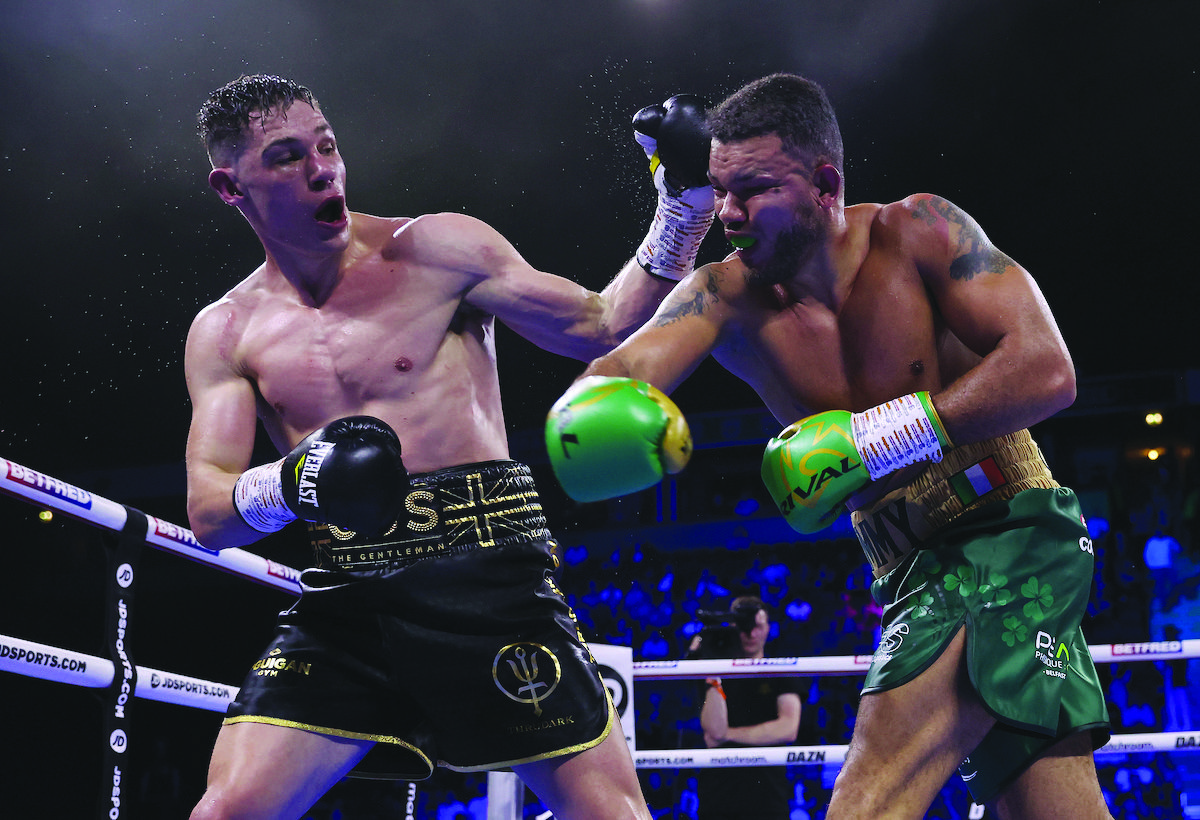 BUILDING momentum and putting himself in the frame for any opportunities that may emerge is the plan for Tommy McCarthy (19-4) who will face Latvia’s Reinis Porozovs (20-18-1) over eight rounds at cruiserweight on Saturday’s Europa Hotel card.

The West Belfast man bounced by from his pair of losses to Chris Billam-Smith with a routing of Pauls Vilbergs in Estonia back in June and intends to retain that winning habit this weekend in a fight he is fully expected to win and win well.

McCarthy has now teamed up with trainer Dan Boyle and he says he is in a much happier place being stationed so close to home, rather than travelling up and down to Dublin, and predicts this will prove to be the winning formula for the next phase of his career.

The 31-year-old still has ambitions of making to the top and having that one-to-one treatment in the gym is helping him find the extra few per cent he needs, so intends to showcase his skills and do a number on the visitor on Saturday.

“Everything has gone good,” he reports.

“I’ve had good sparring, trained hard and ticked every box I need, so I’m feeling good and in great shape.

“This will be the second fight we’ve had together, so everything is just progressing nicely.

“It’s all one to one in the gym. I don’t need anyone to teach me how to box as I’ve been doing it my whole life. I just need that attention to detail and Dan is giving me it.

“They say a happy fighter is a dangerous fighter. I feel sharp as a razor as I’m just happy with everything now. The gym is beside my house so I get to spend time with my kids between sessions.

"Me and Dan are training hard and it’s all good vibes. Everything is the way I want it to be and I feel in tip-top condition.”

Eric Donovan this weekend in the fight of his life.

Billam-Smith is rumoured to be dropping the European title he won from McCarthy in order to chase a world title and should the prestigious ‘blue belt’ become free, the Belfast man wants to be front and centre to challenge for it and put himself right back into the conversation for big nights.

He acknowledges that putting a winning run together will help his cause immensely as a world ranking would then make him eligible should any of there division’s champions fancy a voluntary defence against him.

“Just stay active and wait until the opportunities to come around because they will,” he agreed.

“As long as I’m busy and keep winning, then something will come up. My name still holds weight in the division and I want to keep moving up. The more you fight and win, the more the momentum builds.

“It would be great to become a two-time European champion.
Anything can happen in boxing and you see Padraig (McCrory) fighting for a world title that came out of left field.

“He can definitely pull off the upset and that’s boxing for you. The opportunities can come out of nowhere and before you know it, you’re a world champion.”

O’Neill faces Laskowski
Owen O’Neill has got fresh opposition on Saturday night as he will now take on Polish southpaw Marek Laskowski (9-14-2).

‘The Operator’ was due to face Dublin’s Martin Quinn, but it is understood the fight was not given the thumbs up by the Board so the North Belfast man will now instead put his perfect record on the line against 34-year-old Laskowski.

O’Neill entered the professional arena with little by the way of an amateur background, but has come on leaps and bounds with his work in the gym under Dee Walsh beginning to show.

Having teamed up with manager Mark Dunlop, he is confident he can continue to develop and land some decent opportunities down the line.

“When I started off I didn’t believe I could do too well, but now I really believe I can win titles, go far and make some money,” he opined.

“I can be in exciting fights and with Mark Dunlop behind me - the best manager about and called ‘magic Mark’ for a reason - I can go far.”

Top of the bill on Saturday is Eric Donovan who takes on France’s Khalil El Hadri for the vacant EU super-featherweight title.

The popular Kildare man is in the final stages of his career and having bounced back from his defeat to Cuban superstar Robeisy Ramirez with a victory over Engel Gomez in summer, ‘Lilywhite Lightning’ will be keen to claim this title that could pave the way for a crack at the full EU title.

Completing the five-fight card is a Cavan derby between Owen Duffy and Dominic Donegan, while Conor Quinn will now face Darwin Martinez.