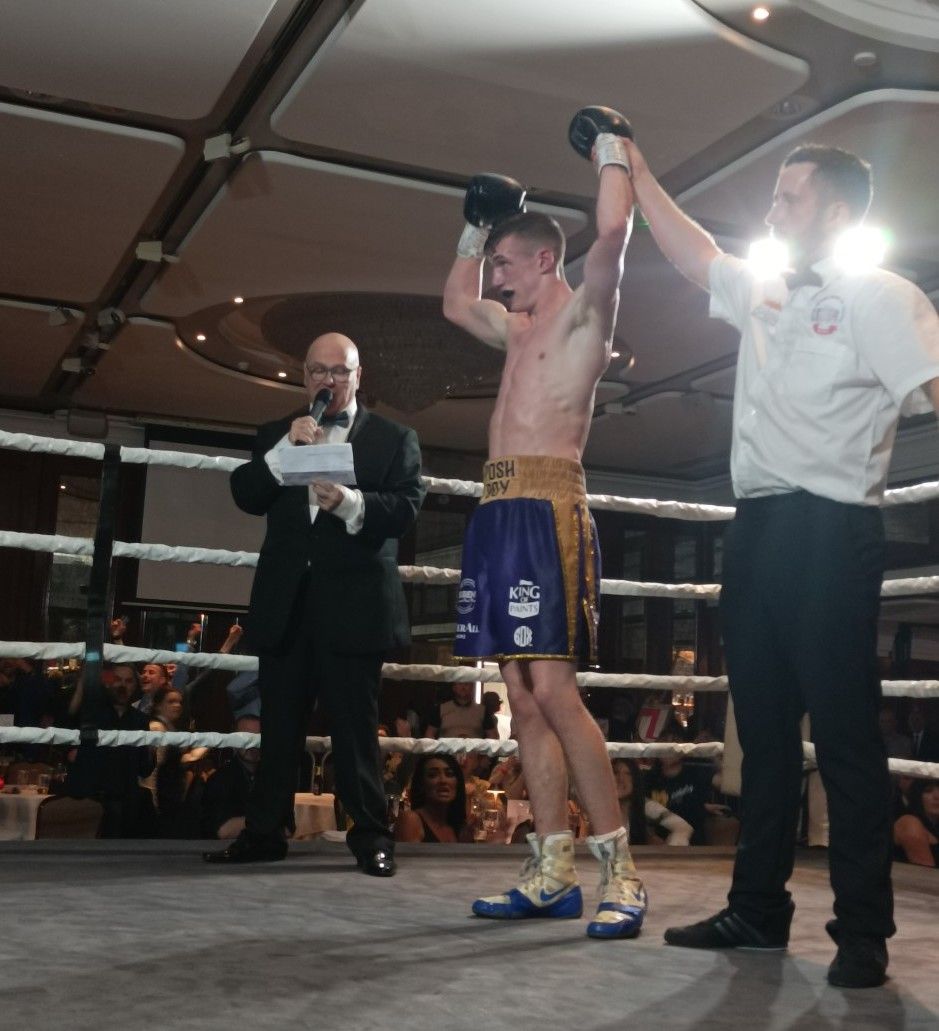 COLM Murphy prevailed in a gruelling battle against Brayan Mairena at the Europa Hotel on Saturday night to make three wins from three as a pro.

There was no doubt this was his toughest assignment to date, but Murphy was a worthy winner, getting the nod on Hugh Russell Jnr's scorecard 60-54 although it was an incredibly competitive battle that thrilled the packed hall.

The South Belfast super-featherweight was excellent off the jab and was quicker on the draw to land some beautiful counters, leaving the Nicaraguan bloodied by the end.

Yet he had to absorb some thudding body shots, his fitness and grit tested to the limit, but he did so well to claim a deserved win.

The opening rounds saw 'Posh Boy' control matters off a ramrod jab, jolting Mairena's head back with the visitor having his own success to the body, but was countered brilliantly on a couple of occasions.

As Mairena's tried to march forward early in the second, he was caught with a flush left that made him think again and Murphy picked a stunning right hand through the middle that was taken well by Mairena.

The Belfast man was taking shots too - perhaps too many for his liking - and his gumshield knocked from his mouth as the action warmed up and both men let their hands go.

Murphy's speed was evident in the third as they both threw simultaneously but he was first to kand with a right and late in the round, a beauty of a left stiffened the legs of Mairena who for the first time looked hurt, but the bell sounded seconds later to give him some respite.

The accumulations of those jabs came to the fore early in the fourth as blood began pouring from the visitor's nose and he was clearly troubled as he struggled to breathe through in.

Still, he marched on and was working the body to try and slow the Belfast man down, but to no avail, as Murphy kept coming and landed another beauty of a left counter late in the round.

There was no stopping the blood from Mairena's nose that was becoming a mess and possibly broken but he was not for stopping and seemed happy to stand and have a fight despite being out-jabbed and was perhaps becoming a little frustrated as he clipped Murphy very late after the bell had gone to signal the end of the fifth as the Belfast man's coach, Dee Walsh made his feelings known to the man in the middle and the away corner.

The sixth saw both men empty the tank, throwing meaty shots in an all-action round as Mairena looked for the home run shot with the uppercut and while he was having some joy, Murphy was having more as the final bell brought the crowd to their feet in appreciation of a fantastic battle that Murphy will take so much from going forward.

Farrell gets the stoppage

Ruadhan Farrell made it two wins from two with a first-round stoppage of Hull's Luke Fash earlier in the night.

The North Belfast super-bantamweight man looked a little rusty when making his debut in March, but was visibly much more settled this time around, boxing very well off the leb early and finding a home for a counter left.

First stoppage of the night!@ruadhan_farrell gets his man out of there in the very first round!@MARKHDUNLOP #Rudy #IrishBoxing pic.twitter.com/en3lK0lWVb

The visitor was clearly angered and felt the stoppage was very premature, storming from the ring as the decision was read out, but that wasn't Farrell's problem as he got himself another win that is building momentum for him going forward.

"I wasn't expecting that," he said of the sudden finish.

"I saw the chance and took it with both hands. I caught him with a left hook after 15 seconds and thought 'I'm going to stop this kids' and I did.

"I really enjoyed it and was nearly crying there, but I'll keep the tears in. It's my first stoppage and I wasn't expecting it. I was expecting to get in there and get four rounds under my belt, but when you see someone hurt, you stop them. I could go again in a couple of weeks.

"I hadn't fought since 2017 when I was on the semi-pro scene so the debut was a bit rusty. I showed there I stayed in the gym, worked hard and proved a lot of people wrong.

"I was getting called out by nobodies but showed there that's what you will be up against. It's great to get the stoppage to show what I'm all about.

"I'll be John Breen's next world champion. He's been like a father figure and stood by me over the last four years and made me a better person. I will be a world champion. The sky's the limit."

Top billing on the night went to Omagh's Tiernan Bradley with a second-round stoppage of Janos Penzes on his home debut having won his first four pro contests on the road.
Penzes looked decidedly unsteady from an early jab so it was no surprise he didn't go the distance although it was a peach of a looping right that closed the show.

Eric Donovan got back to winning ways as he was a comfortable 60-54 points winner over Engel Gomez as the Kildare man plots a route to a European title at super-featherweight, while Limerick's Graham McCormack was also bounced back from defeat to out-box Paul Kean to get the nod on the card.