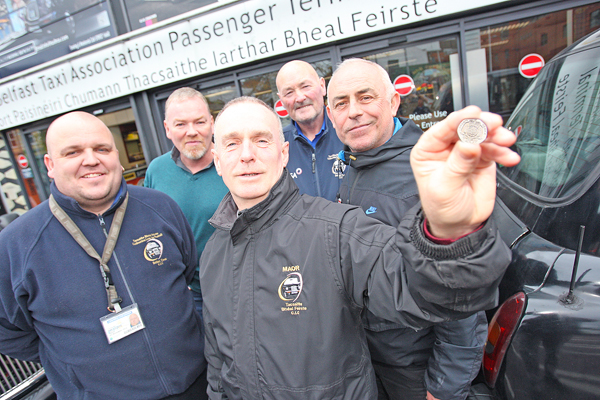 WEST Belfast’s black taxis are set to put their fares up – for the first time in nine years.

The move has been forced on the fleet due to the economic uncertainty that is predicted to be coming down the line with the decision to leave the European Union.

Stephen Savage, Manager of Belfast Taxis CIC, said: “We realise that the people of West Belfast rely on us and we rely on them too. However, with all this Brexit uncertainty the price of fuel is going up and up and we have had no choice but to impose a very slight increase.

“We have put this off for as long as possible, there actually hasn’t been a fare increase in almost nine years, meanwhile Translink have increased their fares six times. Our drivers have to make a living, we are only putting the fare up by 20 pence.”

Stephen added that the vast majority of customers “are extremely generous and would often pay above the odds”.

“But unfortunately we had to make things official, so as and from Monday November 7, the fares in North and West Belfast Taxis services will increase.”

Stephen said that not only has the price of fuel increased but so has the cost of taxi insurance and maintenance costs have spiraled.

He said: “We can assure all of our passengers that we will continue to look at all options to provide our services at cost effective prices.”

The prices will be as follows:

However passengers travelling to Twinbrook, Poleglass or Lagmore from the Black Taxi depot in Castle Street will be charged £1.50 up until Lidl on the Stewartstown Road and £1.90 thereafter.

Heading into town is £1.50 until Milltown Cemetery and £1.90 thereafter.

Children travelling to or from school in uniform will be permitted to travel at child rate during school term.