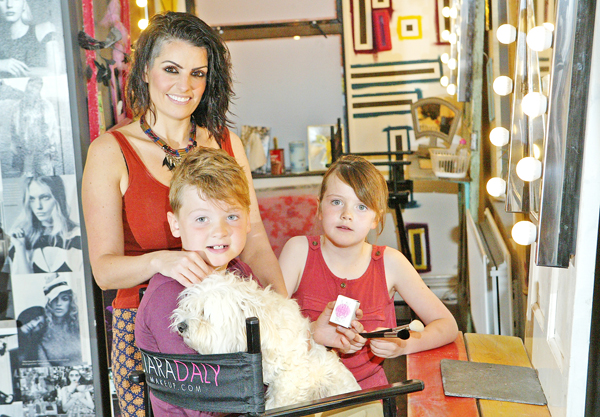 Ciara Daly with Jay, Darcy and Tootsie the dog.

“THE most important thing in a make-up artist’s kit is hands down the brushes,” explains go-to make-up guru and trailblazing entrepreneur Ciara Daly whose range of bespoke brush collections sit proudly in Gordons and Medicare chemists after the 37-year-old secured a major contract with the top outlets.

Established for some years as the most sought after make-up artist in the industry, Ciara has built up a extensive client base and founded a make-up academy and training school. The former St Louise’s College pupil’s signature ‘Hero’ foundation brush can be found in many a cosmetic purse with 14,000 sold in 2015 alone.

I meet the beauty and business innovator above her burgeoning make-up studio on the Lisburn Road where staff are putting the finishing touches to their latest facial portraits, taking calls or making bookings for the next Hero house party.

Ciara said her range of brushes was born out of a clear gap she identified in the market.
“I opened my Academy in July 2009 and when the girls were coming in the doors obviously the first thing they needed was to put together a kit,” she said. “The students were coming in with all the best of products from Chanel, MAC, Estee Lauder but they were coming in with really poor quality brushes.
“Whenever I questioned them on it they would say that the only other alternative out there were really, really expensive. But to me the most important thing in a make-up artist’s kit is hands-down the brushes. It was then that I started to look for and research good quality brushes at affordable prices and there wasn’t really anything on the market that was hitting both things. Over the next couple of years I tried different manufacturers, different distributors of brushes but couldn’t find any that were high quality at affordable prices.”

In 2012 after a “long, hard search” Ciara struck gold as she received sample brushes “from a manufacturer that I really liked the quality of”. “The Hero brush is a foundation brush that sort of came about as I found that a lot on the market were using up too much product, leaving brush strokes on the face and were very time consuming. I liked the idea of flat-headed brush as it buffs the products into the skin and I also liked the idea of a Kabuki-style handle as it is easier to use and I also knew what type of synthetic hair I wanted. We basically went back and forth with 20 different prototypes before the Hero brush was born.”
Ciara’s first initial order for the Hero brush was 2,000 units which took a year to sell. “In year two I sold 7,000 brushes, in year three we sold 14,000 and we are up to over 40,000 brushes to date, so basically every year we have doubled our sales. The success of it is really down to word of mouth. There has been very little advertising, basically it’s clear to whoever is using it that you just wouldn’t go back to any of the alternatives, everybody was talking about it, it has just snowballed and completely taken me by surprise.”
The mum-of-two spoke of how the need for professionally applied make-up is quickly increasing due to the popularity of social media climate and the need to be selfie-ready. “Whether it’s Instagram, Facebook or Twitter everybody wants to be camera-ready. When you get your photograph taken people want to look as professional as they can so the need for brushes just went hand in hand with this.

The main feedback I was getting back from the end user was that whilst the professional brushes all looked great they didn’t know what they were for so I started to create collections. We have the ‘Phoenix’ collection for eyes; the ‘Angel’ brushes for powder and bronzer; the ‘Diva’ collection for eyebrows; and the ‘Desire’ collection for lip and concealer. The demand for these has also just gone boom, it has blown us out of the water and at the minute we are doing around 400 Hero house parties a year.”

Having recently signed a major lucrative deal with Gordons and Medicare chemists to sell her make-up brush collection, Ciara spoke of how there’s the prospect of seeing Hero brushes on stands across the water in England and Scotland.
“I’m really passionate and believe in what I’m saying and selling. I think that make-up can sometimes get a bad rap, that the industry comes across as superficial, that a make-up artist can be a stereotype but in the world that we live in today I would say never mind buying adult colouring in books in the airport this year, buy yourself some nice brushes and practice painting your face because it is very mindful in itself. Ultimately it feels nice to apply make-up, it’s time out from everything else.”

As Ciara’s success continues to juggernaut she tells me: “At the end of the day I’m about creating successful businesswomen and men whether through a masterclass, tutorial, Hero party host or teaching them to become a working make-up artist.”

To find out more about Ciara’s products and services visit ciaradalymakeup.com