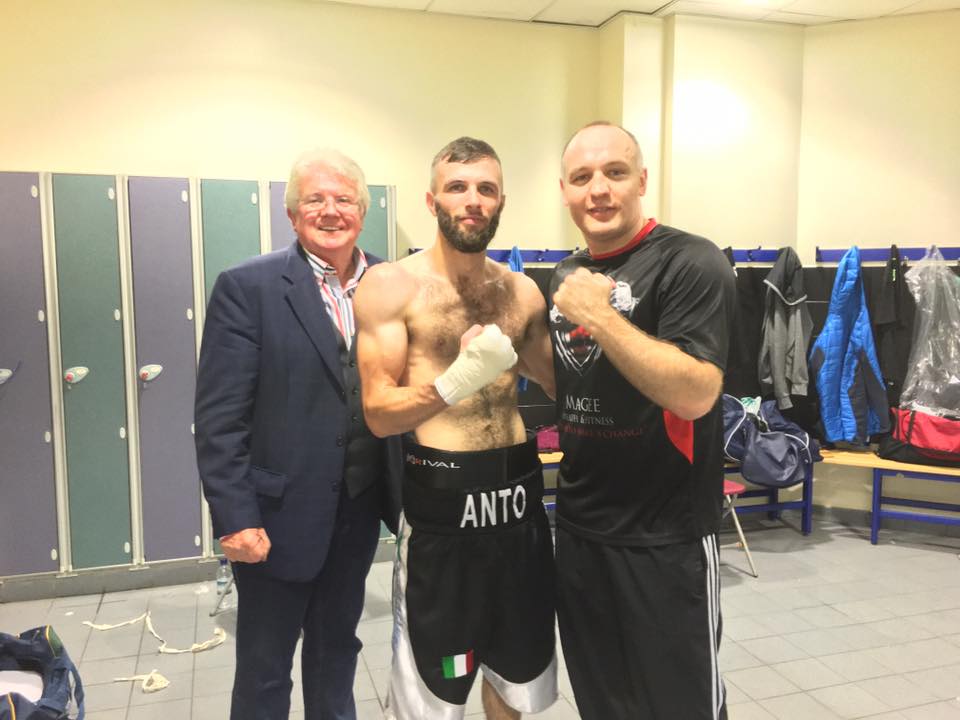 Anthony Cacace with his manager, Pat Magee and coach, Brian Magee following his first round win over Jamie Quinn on Saturday

ANTHONY Cacace made an impressive return to the ring at the Robin Park Centre in Wigan as he improved to 14-0 (7 KOs) with victory over Jamie Quinn.

The West Belfast man had been out of action for almost a year, but wasted no time in improving his record, becoming the first man to ever stop Quinn as he forced the Stockport fighter to retire on his stool after just one round.

Cacace was on top from the opening bell, stalking Quinn who was immediately into survival mode as the hooks were whipped in and it was clear the Englishman was feeling the pace right away and could not come out for the second, claiming his jaw had been broken.

“He had never been stopped. He said he had hurt or broken his jaw,” said Cacace after the fight. “I was hoping it would have went a couple more rounds. I was just bullying him really.

"I wanted to test my sharpness and wanted him to throw a few shots, but as soon as I hit him I knew, you could see it in his eyes. I landed a wee left and it landed on the top of his head. It had hurt him, but I didn’t even put much in it.”

The win delighted his new trainer, Brian Magee who said they had travelled across the Irish Sea expecting six tough rounds. “That’s what we were worried about at the start because this was Anthony’s first fight back after a long layoff, so it was always going to be a tough ask for him,” said the former world super-middleweight champion.

“We came for six rounds, but it’s a great win for him against a guy who has never been stopped.”

Next up for Cacace could be that shot at the British super-featherweight title he craves. Martin J Ward and Andy Townend fight for the vacant strap at the o2 Arena in London this Saturday and it is expected Cacace will be made mandatory for the winner after his proposed final eliminator against George Jupp was withdrawn.

“The vacant title will be decided on September 10 and there is a Board meeting the following Wednesday,” explained Cacace’s manager, Pat Magee. “Anthony was in a final eliminator against George Jupp but he has been withdrawn, so I expect the Board will put Anthony in with the winner of Ward and Townend.

“He was already in a final eliminator, but the other guy withdrew so we expect he’ll go straight into a title fight. “The title is vacant at the minute so I would expect the winner to be told to fight the mandatory within 90 days. We expect Anthony will be fighting for the British title before the end of the year.”

Cacace is also adamant he should get his shot at the Lonsdale Belt before Christmas having bided his time for so long and he is confident he will claim the strap when his chance comes.

“I think there should be no doubt I’m fighting for the British title next as I have been in the top ten since my third fight,” said the Celtic champion. “It seems nobody wants to fight me. I have always wanted to win the British title. I will fight anyone in the division for it, I don’t care who so I’m ready. I don’t want any more fights, a straight British title (shot) from here. Pat is the man, he’s going to try his best (to make it).

“I have a good team around me now with Brian training me and Pat managing me. “Pat gets the best fights. You could see that with Phil Sutcliffe, he gave him a great chance and that’s the chance I’m looking for.”