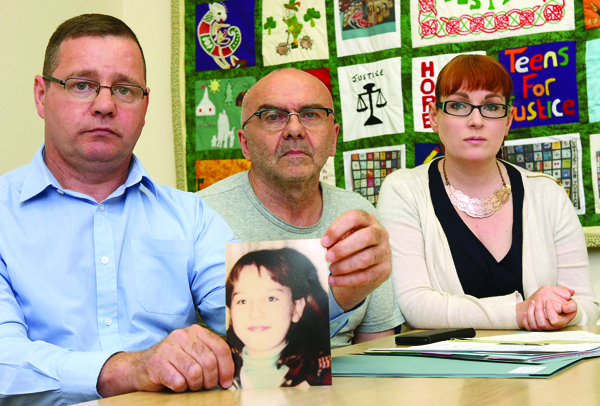 37 YEARS ON: Mark Kelly with a family photo of Carol Ann; he’s with RFJ’s Paul Butler and Mary McCallan

A WEST Belfast family have issued an appeal for information relating to the killing of 11-year-old schoolgirl Carol Ann Kelly, whose 37th anniversary occurs this week.

Carol Ann was fatally injured by a plastic bullet fired by a British soldier in disputed circumstances on May 19, 1981. The round struck her on the back of her head as she walked back to her home at Cherry Park in Twinbrook from a nearby shop. Carol Ann died from her injuries three days later on May 22. At her funeral a priest described her as “kind, gentle and always smiling and laughing.”

The inquest at the time found two plastic bullets had been fired from Land Rovers. Soldiers said there was rioting in the area, but residents challenged their version of events and said it was quiet in the area at the time. The coroner said the child was an innocent victim, returning home with a carton of milk.

Speaking to the Andersonstown News from the Relatives for Justice (RFJ) offices, Carol Ann’s brother Mark said he was keen to hear from anyone who was at the scene to help with their ongoing investigation surrounding the circumstances of Carol Ann’s death.

“We have a draft Historical Enquiries Team (HET) report that we have gone through and what I have noticed is the amount of evidence and statements that weren’t taken at the time from people that were never interviewed,” he said.

“Carol Ann was well known in the estate, her friends were with her at the time as they were coming back from a little house shop at Aspen and we are wondering, were they questioned? We don’t want hearsay as that just blurs the lines really.”

Mark spoke of how Carol Ann lay on the ground for “some time” after she was shot, ”as the ambulance was turned away and a lot of adults were on the street as well.”

“We have been working with RFJ on this and the appeal is really for people to come forward to either myself or any of the Kelly family or to the case workers here at RFJ as we continue to fight for justice for Carol Ann.

“We have our truth and we want it rectified that there wasn’t any rioting taking place that day.”

RFJ caseworkers Paul Butler and Mary McCallan have been assisting the Kelly family in seeking the truth.

“We hope this appeal with help assist the family in establishing the truth about how Carol Ann was killed by the British army’s indiscriminate firing of plastic bullets,” said Paul.

“The changed political situation we hope will encourage people who would not have been willing to come forward in 1981 to be prepared to speak now.”

If you think you may be able to help. contact Paul or Mary at RFJ by phone on 02890 627171 or via email at adminrfj@relativesforjustice.com