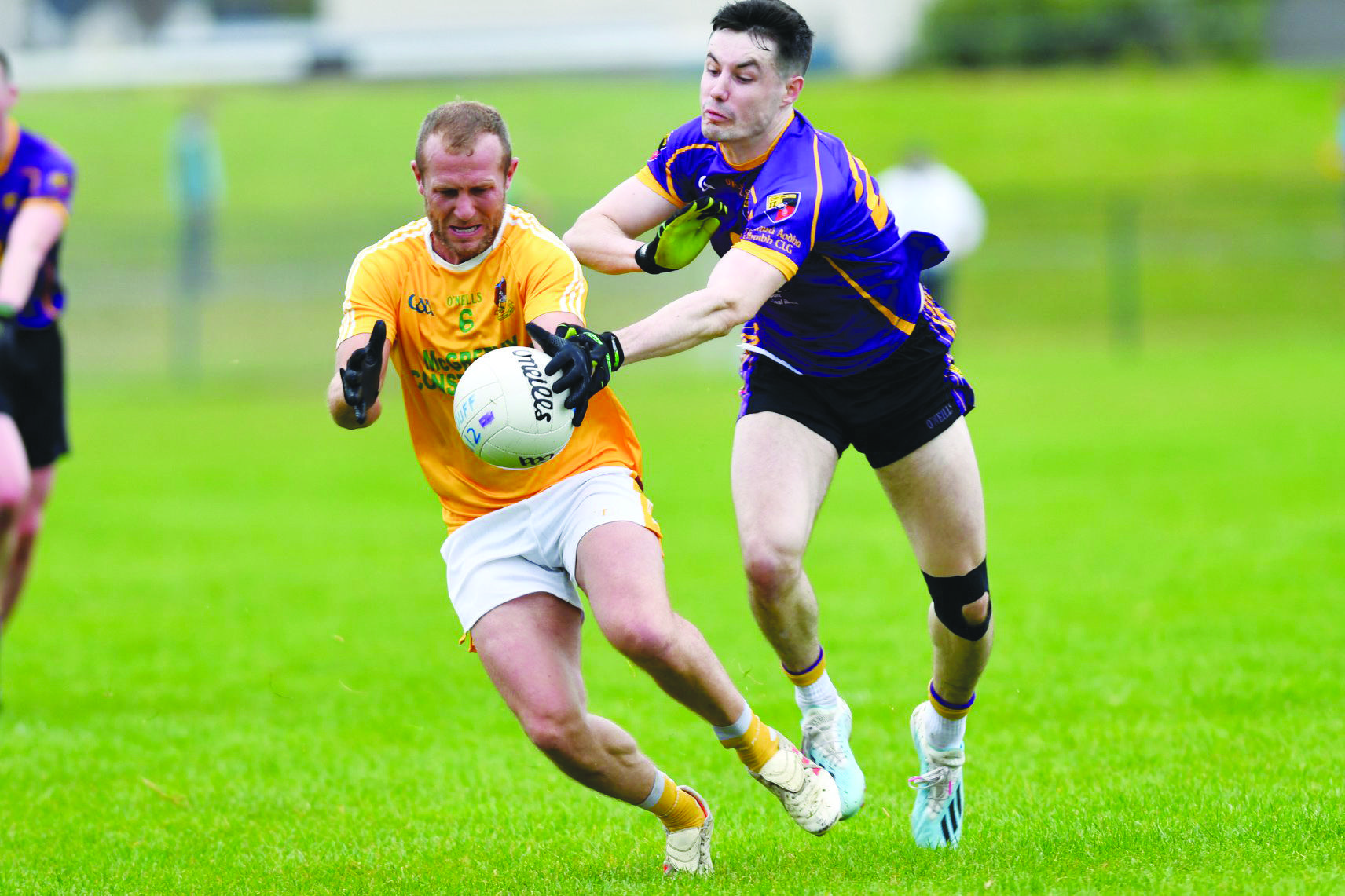 Barry O'Hagan (Clonduff) and James Guinness (Carryduff) in action during last year's Down SFC quarter-final at Newcastle. The sides meet again on Monday evening in Newry

THE Down Senior Football Championship is the latest to get underway with Carryduff aiming to make the breakthrough in what looks to be a wide-open renewal.

In what has been a stop-start campaign due to the Covid-19 pandemic, most teams have only had a few weeks to prepare for their Championship campaign.

In that regard, three-time U21 champions Carryduff may have a slight edge as they were still involved in the Creggan tournament back in March until sporting fixture ground to a halt.

Indeed, many neutrals will see Carryduff as a threat to all in their third year at senior level.

Their Championship opener sees them go toe-to-toe with a Clonduff side (Newry, Monday, 7.45pm) who ended their interest in the 2019 Championship at the quarter-final stage.

DJ Morgan’s side looked set for a famous victory having led by five points in the first half thanks to goals from Ronan Beattie and James Guinness.

Yet, an experienced Clonduff side were patient and reeled in Carryduff during the second half while keeping their opponents scoreless for 25 minutes in a bruising encounter in Newcastle.

Yet, just two points separated the teams and Carryduff went on to seal the Division Two title before winning a third successive U21 crown last autumn with a win over Mayobridge in the county final.

Selector Shane O’Neill feels this young and confident Carryduff team are ready to make their presence felt in the Down senior football Championship.

“Everything has been going well so far and the training is good an intense,” said O’Neill.

“All the boys are fully committed and they are looking forward to Monday night.

“We feel like we owe them (Clonduff) one from last year. We were ahead for a good portion of the game, but maybe their Division One experience and a lack of it on our behalf showed in the second half.

“We’ve a good young team and the U21 success over the last three years has helped the lads mature a lot. You can see it in training and in the games they’ve played so far this year.

“Clonduff had Division One experience and they were playing against the likes of Kilcoo, Burren, Warrenpoint and Bryansford week in, week out.

“Division Two is a slight drop down. In Division One, you are coming up against seasoned teams who are a bit streetwise.”

He added: “We were a bit slow coming out at the start of the second half against Clonduff last year and their intensity was very impressive.

“Our boys can take hits no problem, but it was the intensity in their tackling that we probably weren’t used in playing in Division Two last year.

“We’ve been working on it since last year. In the Burren game, we only lost by a point and it should have set us up well for Monday’s game. Burren, Kilcoo and Clonduff are probably the top three teams in the county.”

With Down panellists Daniel and James McGuiness, Ronan Beattie and Owen McCabe in their ranks, Carryduff know they have the firepower to compete with the best teams at senior level.

O’Neill feels that the hat-trick of U21 titles has given the players the belief that they can turn that underage success into a senior Championship win.

“The group that we have now, they’ve beaten the likes of Burren, Kilcoo and Bryansford at underage,” said O’Neill.

“They’ve confidence and they’ve no fear of any team.

“It is just about bringing that through to senior level now. We just need to push on.

“The young fellas are busting to get at it on Monday night and they are raring to go. It has all the makings of a great game.”

With the likes of Aidan Carr and Barry O’Hagan pulling the strings for Clonduff, Carryduff will need to show more composure and more patience than they did last year in Newcastle.

Yet, they have the pace and the skill to navigate Clonduff’s packed defence and they may well gain revenge for last year’s quarter-final loss.