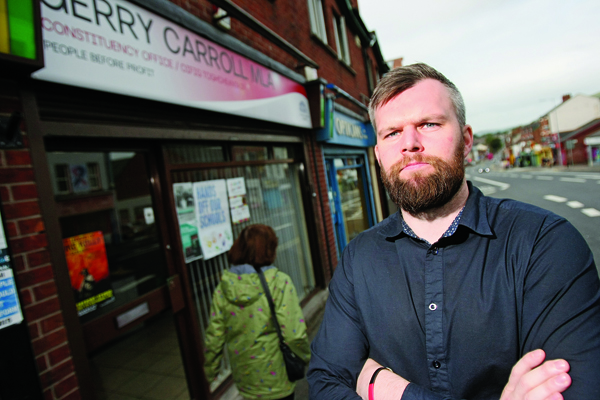 Workers at Caterpillar’s West Belfast factory say they fear for their health and safety after the manufacturing firm reintroduced 170 staff members to the workplace this week.

Staff at the company’s Springvale site – which makes axles and transmissions – were furloughed when it temporarily suspended production on April 6. However, as regular shift patterns resumed on Monday, one worker said that proper safety measures had yet to be implemented.

“Measures were changed in this facility yesterday (Monday) and it was done for show as far as I can see,” he said. “They started ripping lockers out of locker rooms to separate them, putting tape down, the main gate and turnstiles have been blocked off as opposed to being cleaned and there’s a side gate that’s opened by a security guy.”

“We’re being forced to eat on site, we’ve been told that we’re not allowed off site for our breaks – they have a canteen running on site, which I feel is wrong, because of social distancing.

“I do report these things to management, but it’s whether something happens or not.”

He continued: “When the lockdown was extended our furlough should have extended by two to three weeks. We’re not asking for the world here – we’re asking a couple of weeks.

“In the department I work in I can stay back from people, but others can’t and are working across each other. Some people have been told that they’ll be wearing visors, but they haven’t provided any yet.”

He added: “There have been some changes, but people still can’t stay two metres apart.”

Caterpillar’s Electrical Power Division (EPD), which manufactures generators and associated component at its main factory in Larne, has remained open during lockdown

Workers at Springvale, however, insist that their own work is “non-essential”.

“They’re making generators in Larne, which are used in hospitals and stuff, but this is how the company is playing the card that we are all essential when we’re not,” he added.

“The virus seems to be spreading and we don’t seem to have the same peak as across the water.

“We might peak at a later time, and I think now is a time when we shouldn’t be going and making truck axles and transmissions when we have a full yard of them sitting and going nowhere, to the point where we’re taking rust off them.

“I can’t understand what’s essential about a truck that is used for mining at this point and time.”

A Caterpillar spokesperson said its Springvale facility “operates while adhering to the Government's guidance”.

“Our employees' safety, health and well-being remain a top priority,” he added.

West Belfast MLA Gerry Carroll said he was “incensed” that Caterpillar had opened the factory.

“Caterpillar staff from the site in West Belfast have contacted my office, concerned their lives could be put at risk by undertaking non-essential work, because social distancing won’t be possible,” the People Before Profit man said.

“They are understandably afraid for themselves and their families. The question must be asked: where is the Stormont Executive in all this? They talk about lockdown and chastise the public for not staying at home while seemingly allowing big business to do what they like in the name of profit.

“They should be pro-actively targeting non-essential businesses who threaten to open, issuing fines and using the money recuperated to pay for PPE for frontline staff.

“Instead, they’re taking a spineless approach, bowing to the interests of big business, even if it risks further spread of the virus.”