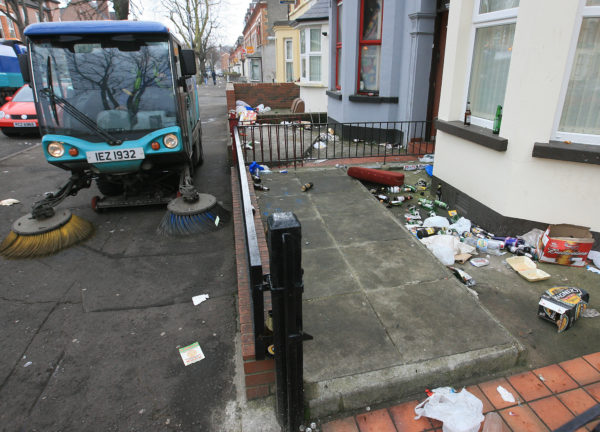 CLEAN UP: The aftermath of a street party in the Holylands area of South Belfast

A NEW study which recommends the reinstallation of CCTV cameras back into South Belfast’s Holylands area has been welcomed by residents, elected representatives and community groups.
The residential area, which is heavily populated with students attending the nearby Queen’s University and Ulster University, has been on the wrong end of anti-social behaviour over recent years, resulting in harsh penalties for those identified by the university campuses. St Patrick’s Day and Halloween are two festivals that have seen some of the worst cases of anti-social behaviour with large crowds of young people descending on the area.
The Holyland Transition Study was launched last week, after being commissioned by the Belfast Forward South Partnership and authored by Ulster University Professor Paddy Gray.
With the count down to St Patrick’s Day on March 17 imminent, the study recommends that preventative measures such as reintroducing CCTV and discouraging the wearing of “sectarian symbols” be adhered to.
SDLP Councillor Gary McKeown told the South Belfast News that he would be in favour of the return of CCTV to the area.
“The police and Belfast City Council have and do work together in the area and the reintroduction of CCTV would be further support for their work in tackling anti-social behaviour. The re-introduction of CCTV would have be funded, properly monitored and would go some way to deterring crime and to bring those responsible before the courts,” he said.