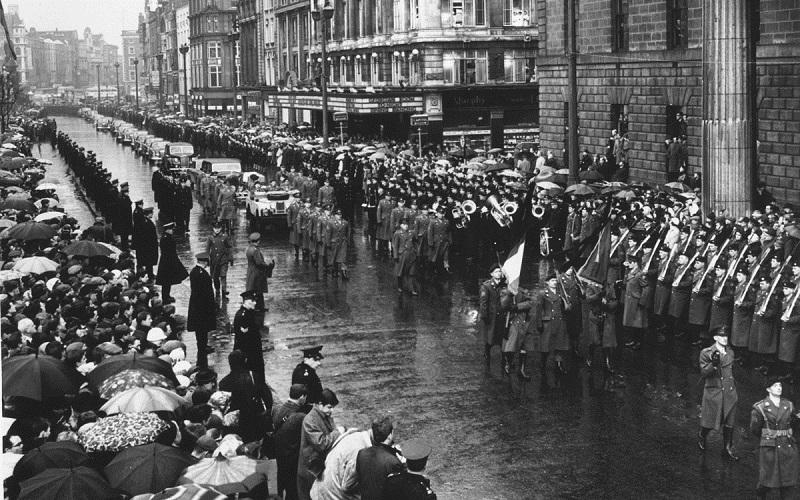 TRIBUTE: Crowds line the streets of Dublin for the funeral of Roger Casement; British Prime Minister Harold Wilson authorised the return, but specified that Casement was not to be buried in the north

Operation Hopenot was many years in the planning. This was the name given to the planned state funeral of Winston Churchill. When the 90-year-old former leader died on January 24, 1965 Operation Hopenot swung into operation. Six days later after a three-day lying-in-state in the Palace of Westminster, the funeral took place in St Paul's Cathedral, attended by 110 world statesmen, the largest global assembly until the death of Pope John Paul II some fifty years later. Given his advanced age, preparations had long been made and the BBC covered the event with Richard Dimbleby commentating.

Another funeral had long been planned but could not take place until Churchill had departed this life. Although he had long retired, Churchill still held sway. Various efforts had been made to repatriate the remains of Roger Casement to Ireland but as Churchill was totally opposed to this, the matter was left in abeyance. Éamon De Valera, President of the Executive Council of the then Free State, wrote to British Prime Minister Stanley Baldwin in 1936 requesting the return of the remains. Baldwin refused, saying it was not the practice of the British to disturb the graves of executed prisoners and that the transfer of the remains could embitter relations between the two countries. Churchill turned down De Valera’s request in 1953. In 1961 a Labour backbencher unsuccessfully brought forward a Private Member’s Bill calling for the exhumation of the remains. Taoiseach Sean Lemass was rebuffed by Harold Macmillan in 1963. The following year was the centenary of Casement’s birth and Lemass again lobbied strongly. Stand-in Prime Minister Alex Douglas-Hume again refused.

Irish hopes rose when Harold Wilson won the October 1964 election with a presumedly pro-Irish Labour administration. The break-through came when the Irish Minister for External Affairs, Frank Aiken, met Wilson at the Churchill funeral. Aiken gave him an assurance that the remains would be buried in Glasnevin Cemetery.

Wilson moved quickly. On learning that Casement's sister, Mrs Newman, had given her support for his re-interment in Glasnevin, he made the necessary arrangements. To thwart the press, he arranged for the exhumation to be completed before any announcement. Two Irish observers were present in Pentonville Prison as well as representatives of the Home Office and Commonwealth office, a priest and the prison doctor. The bones were washed and placed in the casket chosen by the Irish government. The casket was sealed and placed in the prison chapel overnight. The next day it was brought to RAF Northolt and put on an Aer Lingus aircraft which had been chartered for the occasion. On the same day it was announced in the British House of Commons and the Dáil that the transfer was being made.

The remains arrived in Ireland to be officially received by President De Valera and members of the government. The casket was brought to the Church of the Sacred Heart, Arbour Hill, where over the next three days almost 700,000 people paid their respects. On Sunday afternoon the Tricolour-draped coffin was carried on an army gun carriage to the sound of muffled drums and the Dead March to the Pro Cathedral, having paused at the GPO.

The funeral mass was celebrated on Monday, March 1 and the cortege was watched by over one million people on its way to Glasnevin – the biggest since the funeral of O’Donovan Rossa some fifty years earlier. The oration was given by De Valera, who had worked so hard for this day. He recalled that when he was held briefly in Pentonville prison in 1917 he and some comrades had prayed at the grave of Casement. He also dwelt on Casement's love of Ulster: “Casement was of Ulster stock and he loved the province of Ulster, particularly because of the part the people of Ulster had played throughout Ireland's history. And he loved it also because he knew that each one of us, next to our own native province, loves that province best.”

The return of Casement’s remains marked a great change in the British government's attitude. WB Yeats was among many who hailed his return:
That some amends be made
To this most gallant gentleman
That is in quicklime laid.
The gesture by Harold Wilson was a reflection of the greatness of the victim. It was an acknowledgement that he was an honourable man who died for a noble cause. The fate of Casement was more cruel than that of the men who had been court marshalled and shot the previous May. There is something that rightly or wrongly is considered more dishonourable about a death by hanging, and that is what Casement had to face.
I saw that Roger Casement
Did what he had to do.
He died upon the gallows
But that is nothing new.

The Cork Examiner editorial summed up the event. Of Harold Wilson they said: “He could easily have invoked precedent and followed the example of all his predecessors. Instead he has acknowledged the justice of the hard-end attitude which professed to regard Casement as a felon entitled only to a felon’s grave and he has given the Irish people the opportunity of paying the honour they have so long desired to a great patriot.”

Wilson stipulated that the remains could not be brought to Northern Ireland as “the government feared that reburial there would provoke Catholic celebrations and Protestant reactions.”

It’s just a hundred years since his execution. Casement's last wish, that he be buried at Murlough Bay, may never be satisfied, but at least he has had a dignified resting place for more than 50 years now – “beneath an Irish sky”.