Conlan and Ancajas on weight ahead of world title showdown 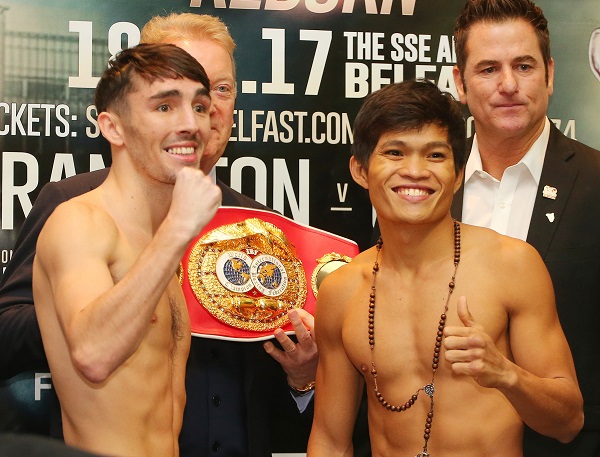 Jamie Conlan and Jerwin Ancajas were all smiles on the scales today Picture by Jonathan Porter/PressEye.com

JAMIE Conlan and IBF super-flyweight champion, Jerwin Ancajas weighed-in at the 115lb limit ahead of tomorrow’s SSE showdown for the Filipino’s world title.
Conlan goes into the bout as a heavy underdog according to the bookmakers, but that means nothing to ‘The Mexican’ who believes he is ready to deliver a career-best performance against the champion.
There has been a hunch that Conlan’s heart-in-your-mouth wars in recent years have been more to do with him being brought down to his opponent's level, but this time he knows he needs to raise his game and produce the type of performance he feels he has yet to unleash.
“Not one bit of nerves, it’s all excitement,” said the West Belfast man.
“I’m excited. I’m like a fan on the outside because I want to see what I’m going to do in there.
“I know what we’ve done in camp, know what we’ve done at the highest level in camp. We’ve brought in world champions and I’ve been putting them down in sparring. I’ve looked like a million dollars, it’s just about transferring it into the fight.
“This is the first time in my whole life I’ve come ito a fight with this kind of mindset.
It’s finally sunk in at hopefully the perfect time.
“I know the enormity of the task at hand. I know I’m 9/2 in the bookies. I don’t think Carl (Frampton) or (Ryan) Burnett have have been this odds against, so I know I need to be the best I can be to become champion, but I wholeheartedly believe I will be.”
It has all been very respectful between champion and challenger with the staredowns preceded and followed by a handshake and respectful nod at today's Clayton Hotel weigh-in.
Conlan has never been one for antics at a weigh-in and he says he wasn’t about to start now.
“We’re going to fight no matter what, whether we start shouting at each other or not,” he responded.
“There is no point in slabbering or getting in each other’s face. I’m going to try and take his head off, he’s going to try and take my head off, that’s just how it is.”
There has also not been any brash statements from the champion with Ancajas complimentary to his challenger and the city.
The SSE Arena will be hostile territory for the 25 year-old, but he is unconcerned with the jeers he will likely receive on the night.
“I am excited to fight in Belfast because I know that my opponnet is good,” said ‘Pretty Boy’.
“We are ready and have seen some fights of Jamie’s. He’s a brawler, but whatever he has to bring to the table, we’ll be ready.
“We’re not worried that the crowd will be supporting Jamie because so far they have been really nice and provided the hospitality we expected them to.”
Conlan’s title challenge will be the second last fight of the night, just like when he made his debut against Anwar Alfadli just over eight years ago at the same arena.
Finishing what he started in the same ring would be a fitting way to win a world title and he says he is fully prepared to do just that.
“It’s come full circle,” he agreed.
"I fought a tricky southpaw that night as well. The way it’s gone makes this the perfect night.”