Conlan ready for his Italian job on Vegas debut 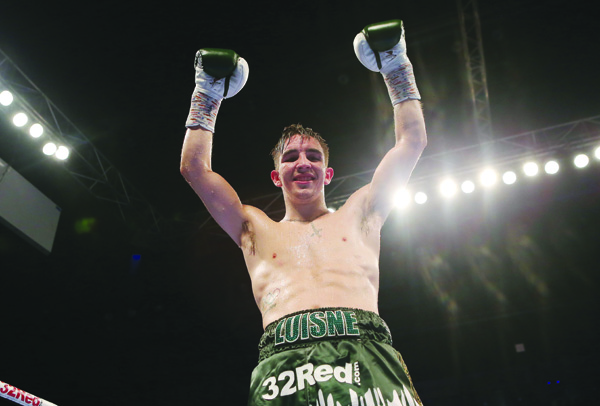 WITH eight professional contests and eight wins so far, it’s another huge night for Michael Conlan this Saturday night as he boxes in Las Vegas for the first time (live on BoxNation from 2am).

In the opposite corner at the Park Theatre at Park MGM on the Vegas Strip will be Nicola Cipolletta (14-6-2) and Conlan has warned the Italian that he intends to produce a dazzling display.

Following a break after his homecoming win against Adeilson Dos Santos back in June, Conlan became a father for the second time to Michael Jnr and enjoyed some family time before returning to camp with trainer, Adam Booth ahead of what promises to be a big end to 2018.

Refreshed and reinvigorated, the Falls man believes he is set to start delivering big with the fighter-trainer relationship starting to flourish and that is bad news for Cipolletta who has the unenviable task of halting the onward march of the Top Rank prospect.

“I had a nice break, which was great,” he confirmed.

“I was able to go home and enjoy time with my family, just enjoy life. Now I’m back training and I know I say this every time, but this really has been the best I’ve felt.

“It just seems like everything is starting to fall into place properly.

“Speaking to Adam, the way I’ve been progressing, he feels I’m ready to step up to face anybody. Once he says that type of stuff, it gives me a lot of confidence. I trust him and it’s great he’s showing even more belief in me now.

“I’m really going to enjoy this because I know it’s going to be a proper performance.”

Conlan has enjoyed a dream start to life in the pro ranks, headlining in his home city, at Madison Square Garden twice plus in Chicago while sharing the bill with some of the sport’s biggest names including Vasyl Lomachenko and Manny Pacquiao.

It’s another first this weekend and also a fantastic learning experience for the former world amateur champion as he gets to experience the madness and mayhem of Sin City.

“It’s going to be different than New York,” he agrees.

“The Garden will always be the Mecca of boxing, but at the same time, Vegas holds its own.

“It’s all learning. Look at me fighting in the Garden – the second time I improved so much. These things are all necessary for where I’m going to be and where I’m going to go. But I’m not really thinking about Vegas so much, just the fight and showing what I have been doing in the gym.

"I just feel like I’m in a completely different headspace in this training camp because of what I’m doing in the gym. That has given me so much confidence.”

While it will be a first for Conlan, the same is true for Cipolletta who boxes in the United States for the first time. Indeed, the Neapolitan has been out of his home country just twice in 22 fights.

These stats mean nothing to Conlan, who says he has reverted to the approach that served him so well during his career in the vest.

“I haven’t watched one second of video and I’m not going to,” he insisted.

“Adam and Jamie (Conlan) have so we know what we’re going to do, but I just think what I have been doing this last while is focusing on the opponent too much. I just need to focus on myself and I think I have done that this time.

“Since I have been a pro, I’ve nearly shown too much respect to my opponents. What I have achieved is all down to the work I’ve done and that’s what I can achieve when I focus on myself."

Saturday’s card is topped by Ryota Murata’s WBA middleweight title defence against Rob Brant, but the name that immediately sticks out on the fight poster from a Conlan perspective is of a former Russian foe, Vladimir Nikitin who will make his second walk to the ring as a professional.

The events of the Rio Olympics will forever leave Conlan and the Russian’s names intertwined and yes, they will fight sooner rather than later.

December this year – Conlan’s expected next outing, a little closer to home – is too soon for that showdown, but with both on the same card this weekend, it is obvious that promoter, Top Rank want to set the wheels in motion now.

“The road to Conlan-Nikitin starts now,” he confirmed.

“It was a smart move for Top Rank to have us on the same card and this will help build the tension for the fight.

“I don’t care who he fights or how he performs because I know that when we do face each other, I will destroy him. What he does between now and then is irrelevant.”