Corr excited to make the switch to the pro ranks 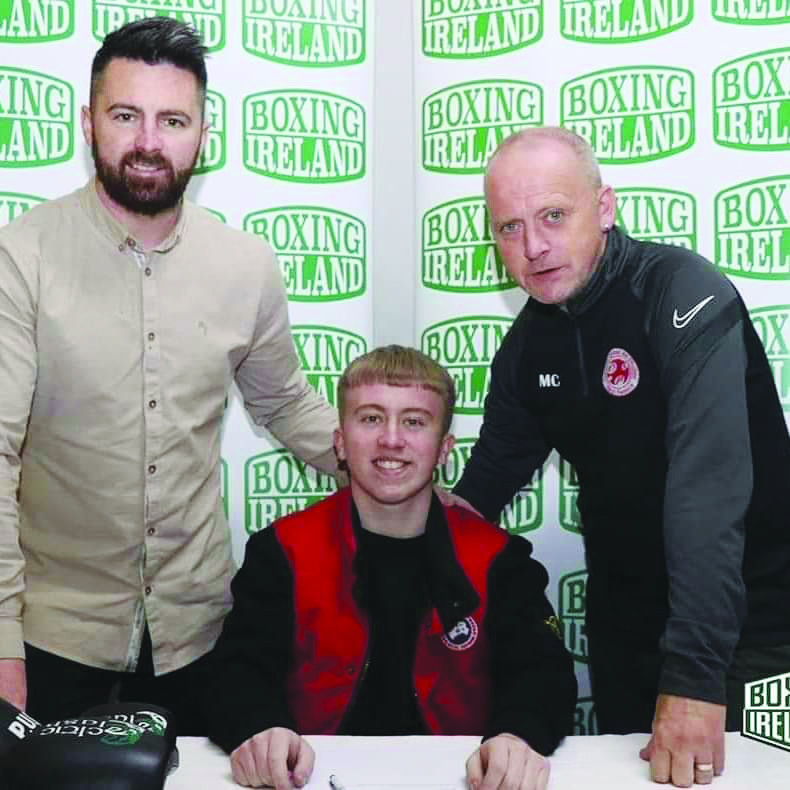 Michael Corr is flanked by Boxing Ireland’s Dennis Morrison and his dad, Mickey Snr when signing his professional contract

IT has always been the ambition of Michael Corr to punch for pay and that will become a reality this year having signed professional forms with Boxing Ireland Promotions.

Corr is a familiar face in the Belfast boxing scene, an ever-present at shows but now gets the chance to step between the ropes having turned 18.

The Poleglass man will campaign at super-bantamweight and does have good experience having boxed and won titles on the semi-pro circuit in recent years but has now taken the plunge and will look to build his career steadily as he takes the natural step forward.

“It was just a matter of biding my time until I put pen to paper,” he said.

“I was boxing on the semi-pro circuit and win a few titles there, gaining experience until the time was right to enter the pro game.”

With friends such as established pros in Paul Hyland Jnr and James Tennyson, Corr is aware of the pitfalls of the professional game and has banked the knowledge he gained over the years by being up close to the fight game.

It was simply a matter of biding his time before he was of age to make the switch and having turned 19 back on May 8 last year, the ambitious West Belfast man wasted no time in contacting Boxing Ireland’s Dennis Morrison to set the wheels in motion.

“Dennis said to me when I was 17 that he actually thought I was older, so that’s how it came about. He always said he was happy to give me the opportunity,” Corr recalls.

“It was the day after my (18th) birthday, May 9, when I got on the phone to him and asked him what the craic was. Obviously, with the pandemic, he couldn’t do anything. I ended up signing before the lockdown but made it public in November that I had turned over.

“It’s not as though I’m going in here blind. I know what pro boxing is all about and the dangers of it. There are a lot of positives from it too, so I’m just looking to those positives and am confident I can stamp my name on the pro game.”

The experience of the semi-pro circuit has given Corr a taste as to what to expect in the unforgiving environs of the professional fight game.

Still, those under-the-radar outings did let him a glimpse of what to expect and he says these performances gave him confidence that he is on the right track.

“I won my last fight on the semi-pro scene for an Irish title,” he reports.
“It gave me good experience of fighting without the headguard and the lighter gloves - you feel the punches.

I was only 17 but getting in with guys who were 28 or 29 but was still battering them. That was giving me the confidence to think I was able to do that, so maybe I can do that in the pro game against the older boys.”

The teenager has trained under John Breen and Dee Walsh but is now settled with Clonard’s Peter Graham who also has aspiring pros Conor Quinn, Dylan Taylor and Ruadhan Farrell in the same camp.

Looking forward to working with them both. pic.twitter.com/7fH83eRwQJ

Given the current situation, there is no certainty as to when he will make his debut but is hopeful that the Celtic Clash series can return to The Devenish before summer should the public health emergency ease sufficiently.

Still, the delay could be a blessing in disguise as it will give him more time to work in the gym and develop physically.

There is a long road ahead for Corr and like James Tennyson who made his debut as a 19-year-old, there is no need to rush his progression.

With Tennyson potentially bring the Sky cameras and huge back to Belfast, there could be the opportunity of appearing on a huge card in his home city in future, but for now the latest addition to the Belfast fight roster says he is just happy to be embarking on a career he has always strived for.

“When the time is right to make my debut, every box will have been ticked so it will just be time to showcase it,” said Corr, who also works as a barber

“I’m just happy to get the debut out of the way and take it as it comes. I’ve loads of time so there is absolutely no rush at the minute.

“There are a lot of opportunities out there as Belfast is great, fight city. Hopefully, the big nights come back and lads can get a run out on the shows.

‘I’ve always known from a young age that I wanted to be a professional boxer and have always had that I my head. Being around the likes of Tenny and Hylo, seeing what they got to do confirmed that’s what I wanted to do.

“Even at school, I do well, but I knew that I didn’t want to be in an office or out on a site. I always wanted to be fighting, and I’m doing that.”