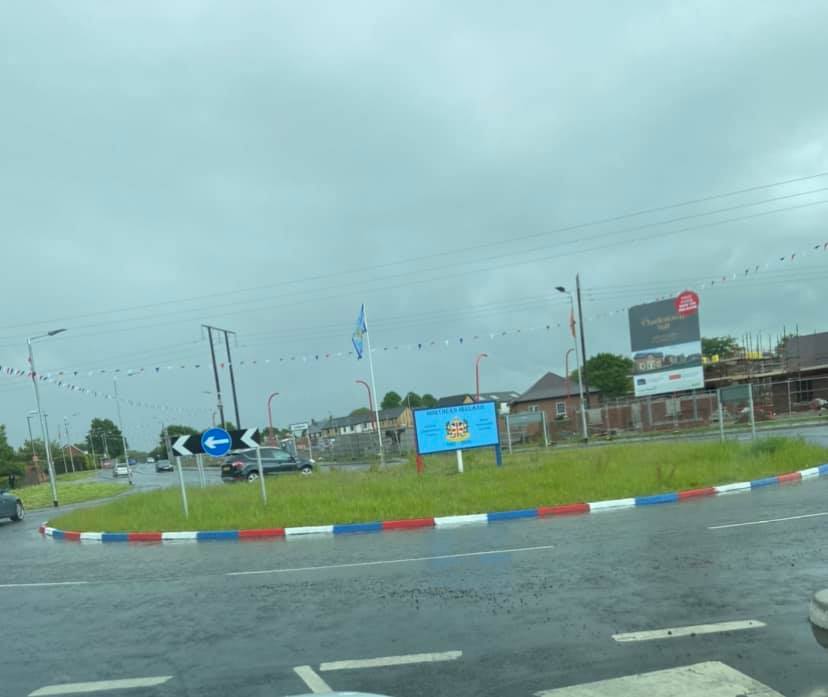 A SINN FÉIN councillor has hit out after roundabouts at Thaxton Village and Glenavy Road in Lisburn were daubed with red, white, and blue paint over the weekend.

Lisburn & Castlereagh Councillor Gary McCleave said those responsible, who also erected loyalist flags in the area, had attempted to “mark out territory” and to intimidate nationalist residents.

The roundabout at Thaxton Village has regularly been a focal point for the erection of loyalist flags, despite being an area with a small but sizeable nationalist majority.

Cllr McCleave said he has raised the latest attempt at “intimidation” with both the PSNI and the Department for Infrastructure (DfI).

“This is something I have been raising since the flags went up at that roundabout,” he said.

“I have been contacted by people from both sections of the community wanting them down.

“It’s not people from the area who are doing it – they’re coming in from outside the area to do it, and they are doing it because there is a small majority of nationalists living in that area, and they’re trying to intimidate people.”

Cllr McCleave also called for a review of how the PSNI and DfI deal with similar issues.

“You get the same standard response from DfI and the police when you report these issues, and that needs reviewed as well,” he stated.

A PSNI spokersperson said police received a report of lamp posts at the Thaxton Village roundabout and kerbstones at the Glenavy Road roundabout in Lisburn having been painted overnight on Saturday June 5th.

Inspector Alan Lowry added: “At this time the incident is not being treated as a hate crime, however, enquiries are ongoing and police continue to work and engage with the community.”

The Andersonstown News has contacted the Department for Infrastructure and is awaiting a response.