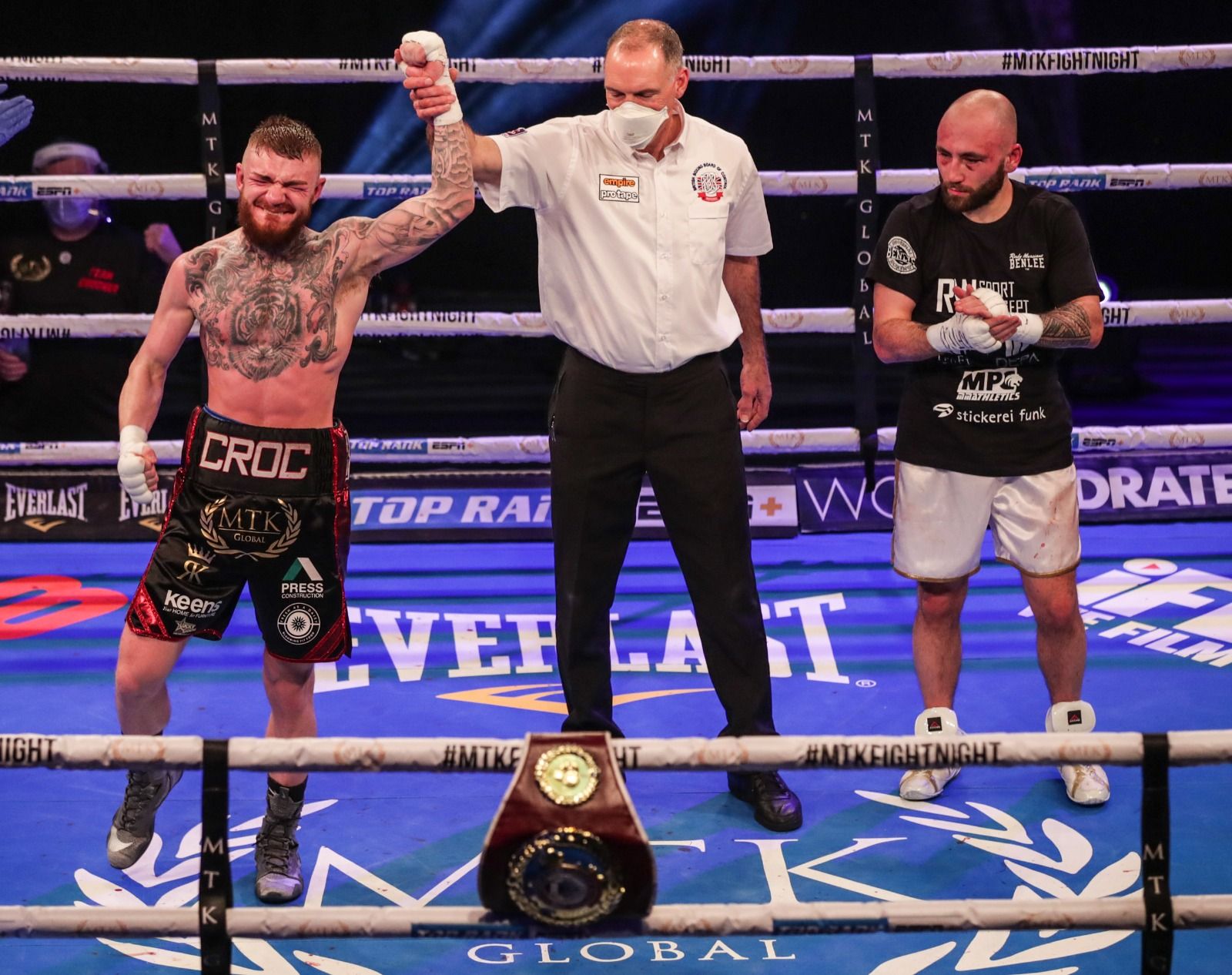 HE was made to work for it, but Lewis Crocker retained his WBO European welterweight title with a unanimous points win over Deniz Ilbay in Bolton (99-90, 97-92, 97-93).

This was a magnificent contest fought at a high pace with both men proving their stamina, durability and heart, but the better work undoubtedly came from the former Holy Trinity amateur who improved to 13-0.

It appeared Crocker was on course for an early night when he had Ilbay on the floor in the third from one of many sickening body shots, but then had to come through a mini crisis in the fourth when he left himself open to a right that had him on unsteady legs towards the end of the round.

However, survive this moment he did and despite Ilbay refusing to buckle despite the heavy fire coming his way, it was Crocker who dominated the second half of the contest with power punching mixed with clever boxing to claim victory.

"I think he's the hardest head I've hit," said a victorious Crocker who will take much from this win.

"That was a great 10 rounds and a great learning experience that will give me confidence for my next fights.

"That's a quality opponent on my record. I was only 12-0 coming into this and 24-years-old, the second event I've headlined in a row, so that's confidence that will get me ready for the next one."

Crocker enjoyed a size advantage and spent the early moments finding his range with the jab, but Ilbay set out his stall and was busy from the off, throwing in bunches.

Crocker was targeting the body and those shots began to take their toll in the third as a thunderous left to the midriff had the challenger down. Bravely, he rose and just about saw out the round.

Ilbay was now mindful of the body shots as his output dropped early in the fourth, but just as it seemed Crocker was in total command, a big right from the German landed flush on Crocker's jaw and had him on unsteady legs as the bell sounded to end the fourth. He grew in confidence from this in the fifth, but momentum would again swing when a crunching body shot again had Ilbay hurt and on the retreat.

As the fight entered the second half, the high pace continued with both intent on imposing themselves but it was Crocker who took the sixth as he again had Ilbay hurt but the durability of the challenger saw him regroup and fire back.

The better boxing was undoubtedly coming from the Sandy Row man but Ilbay was making him work for everything although the challenger was a little fortunate not to receive a count early in the eighth when his gloves grazed the canvas after it appeared a left connected to the temple, but it was ruled a slip.

What little window of opportunity Ilbay may have had was now gone as Crocker finished strong in the 10th, throwing spiteful shots but Ilbay stubbornly would not budge as he made it to the final bell, but there was only one winner.

"I know I could have boxed him, but he would have kept walking me down," he reasoned.

"I just thought 'a fight suits me, so let's do it' and I got the openings to the head and body. He started to push me and in the corner I said to myself: 'You're a champion now; this is ten rounds so you have to work for it.' I went out there in the last two rounds and that made the difference."

It was an impressive display from Crocker who will have won new admirers with power and skill, but also the fortitude to rally when the going got tough.

"I showed heart, grit, maturity and rode the shots well," he continued.

"I got out in the next round and I felt dead on. Fair play to him as he's a quality fighter and he brought out the best of me.

"I worked a lot on the jab in this camp and I think it showed as it kept me at distance. That's something I'll bring to my game next time. It's just about learning with each fight and each year, so hopefully there's a solid few years left in me yet."

Earlier in the night, Kildare lightweight Gary Cully claimed the WBO European lightweight title with a second round knockout of Kazakhstan's Viktor Kotochigov.

The Naas southpaw timed a left beautifully that sent Kotochigov down heavily and despite his best efforts, was incapable of rising as the fight was waved off to see Cully impress in victory once again.