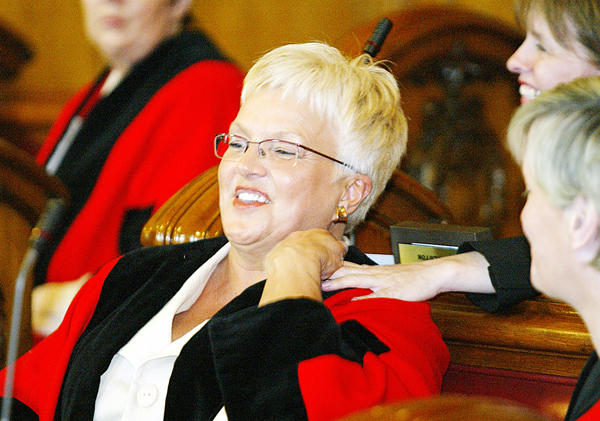 CONTROVERSIAL unionist councillor Ruth Patterson has told the North Belfast News she doesn’t understand why Crumlin Star FC are reviewing their security after she linked the club to the IRA at Monday night’s meeting of Belfast City Council.

The independent unionist was speaking to the North Belfast News after Star chairman Eamonn Hawkins said they had concerns about away games in the wake of her comments and were launching a review of their security. The club currently play their home games in Larne due to Amateur League restrictions.

At Monday night’s full Council meeting, Councillor Patterson claimed that the club was linked to the IRA – she was speaking after Eamonn Hawkins addressed members on the team’s battle to secure a home pitch in Belfast.

The club has been embroiled in a row with the SDLP and Alliance Party, some of whose members opposed an attempt by the club to play their home games at Strangford Playing Fields in South Belfast.

An SDLP rep caused anger when he described the club as being based at “the Ardoyne roundabout”.

Responding to Mr Hawkins’ ten-minute address, Cllr Patterson told the chamber: “I have been working with many clubs in South Belfast who are forced to hire pitches elsewhere at considerable costs.

“We need to be careful about inviting another team in who would want preferential treatment.

“More worryingly for me, it is well known that a man named in Parliament as a senior member of the Provisional IRA...”

Cllr Patterson was then interrupted by Lord Mayor Nuala McAllister. But she continued: “It is absolutely hypocritical to ask unionist members of this Council to support any club linked with a high-ranking republican terrorist.”

Speaking to the North Belfast News, Mr Hawkins said Cllr Patterson’s comments had put the club in a vulnerable position.

“As a club we are disgusted at her comments,” he said. “We steer away from politics, so for her to label the whole club and everyone in it with this is a disgrace.

“We travel all over the north to areas like Bangor and Newtownards and these comments haven’t done us any favours. She should retract these comments.

“She has a bit of authority as a councillor and people listen to her, so I would say she should have a bit more care about what she says.

“We will have to look again at our security when we are travelling to away matches.”

Eamonn said the club has sought legal advice on her comments. He said her intervention had overshadowed his address to Council, which he said had been an otherwise positive move.

“I appreciated the time the councillors gave me to spell out what the issues where, but nothing has been resolved. At the minute we will be going back to Larne for our home games.”

In a significant softening of her tone, Mrs Patterson told us she has a lot of respect for Crumlin Star FC.

“First of all, my comments were factual,” she said. “I think some people flew off the handle, rather than listen to what I said. I respect that everyone has the right to their opinions.

“My comments were not aimed directly at Crumlin Star. They are a very successful, extremely well-run club who do tremendous work in the local community in providing football opportunities for young men.

“Football and sport have a great way of helping communities together and should be commended for that. Politics and sport should be kept apart.

“I would not like to think Crumlin Star would have to review any security measures because of what I said.

“I have been called some horrendous names on social media since. It does affect you when you see things like that.”