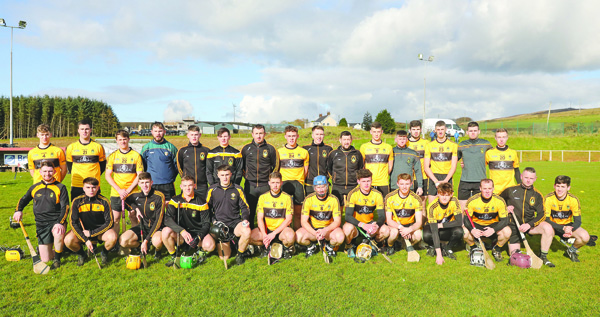 The hurlers of Naomh Éanna will bid to emulate the club’s footballers by reaching the All-Ireland Intermediate final. Standing in their way this Saturday at Dublin’s Parnell Park is Kilkenny side Tullaroan, led by former Cats star Tommy Walsh

FOR the second successive year, the Naomh Éanna club are preparing for an All-Ireland club semi-final – this time in the camán code.

On Saturday, they travel to Dublin’s Parnell Park to take on Kilkenny champions Tullaroan, led by the mercurial former Cats ace Tommy Walsh.
This is familiar terrain for a handful of Naomh Éanna dual stars, including club veteran Philly Curran.

The top pitch at Hightown can be bitterly cold at the best of the times. On a clear day, you can see for miles – all the way to Slemish Mountain on the outskirts of Ballymena.

The prospect of lining out against one of hurling’s most decorated players has kept the spirits up at Naomh Éanna as Terence McNaughton’s men fine-tune their preparations for Saturday’s showdown.

Curran stated: “People might ask us why aren’t weren’t coming out for a few pints over Christmas, but when are you going to get the chance to play in an All-Ireland semi-final again?

“When you listen to Tommy Walsh’s interview after the Leinster final, he talked with passion about playing in the All-Ireland semi-final with his club. He has been there and done everything.

“You’ve a chance to play with your club in an All-Ireland final in Croke Park. In every training session that’s what you are talking about.
“One session, we were training on the top pitch at 10am on a Sunday morning and it was minus two.

“It was so hard to get motivated, but a few boys spoke up and lifted everybody to get focused and get our heads right for January 4.

“Terence has been drilling it into us – Tommy Walsh is coming to town, we have to get our fingers out. We are massive underdogs as it is so we probably need to be doing more than them boys in training.”

While he is adamant there is improvement in the team, he is unsure as to the reasons why they have failed to hit top gear in their Championship campaign since their opening rout of Clooney.

He doesn’t think the fact that they secured Division One hurling before the Championship added pressure on Naomh Éanna, but he believes, in Saturday’s semi-final all the pressure will be on the Kilkenny men.

“I’m not sure. If you think back to last year with the footballers, we were underdogs for almost every game and it suited us,” said Curran.

“You are hoping that, playing a team from Leinster, we are underdogs again. There’s absolutely no pressure on us whatsoever. If anything, the pressure is on Tommy Walsh and his brothers to make sure and get their club an All-Ireland title.

“They dropped down to Intermediate I think six or seven years ago and they were expected to bounce back straight away.

“They struggled to get over the line a good few times in Championships before now. Maybe there’s a weakness there that can be got at?

“Maybe if things aren’t going their way, they struggle. It is up to us to find out and, hopefully, that underdog tag will suit us.”

McNaughton has left no stone unturned to ensure his side regain their stunning mid-summer form ahead of Saturday’s showdown in Parnell Park.

Naomh Éanna have played Armagh, Donegal and Louth in challenge games in recent weeks as the club seeks to reach a second successive All-Ireland Intermediate final – albeit in a different code.

When the Antrim champions were struggling at half-time against Dungannon in their Ulster final at Celtic Park, the Cushendall native told his charges to go out and “ruin Christmas” for him and their families.

They did just that with a dramatic penalty shootout win over the Tyrone side.

It will be a huge ask for them to defeat Tullaroan this weekend, but Naomh Éanna have a habit of proving their doubters wrong. Maybe, just maybe they can ruin Curran’s plans for a well-earned rest.