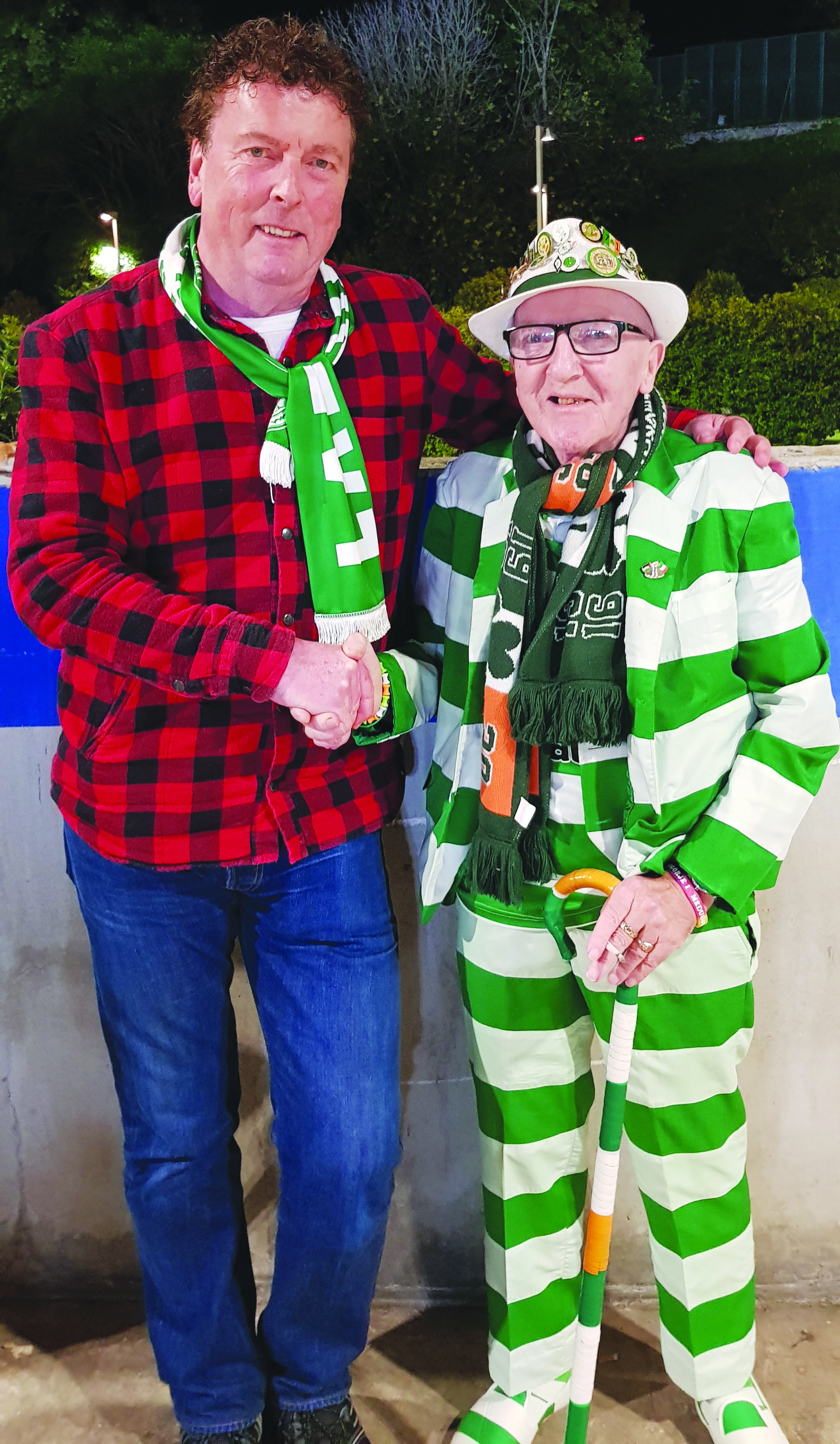 WHEN Al Jazeera asked me to make a documentary series, they must have taken it for granted I would offer them my usual fare of life on the frontline of Syria, Afghanistan, Iraq and elsewhere.

I’ve been shot at and dodged bombs on so many occasions I’ve lost count, so no doubt they expected al-Qaeda, the Taliban, Islamic State, al-Shabab and the other usual suspects to feature in anything I planned to make. But no, not this time.

Celtic fans in Belfast have organised a cavalcade of cars to celebrate the club’s latest Scottish premiership victory. https://t.co/FyiOBIBe2B

This time, I wanted to do something very different. I suggested that we produce a series on football fans; on what it means to be a true follower of six of the most iconic teams in the world.

As we have seen all too clearly this year, football without fans is like chips without the fish. Unfulfilling and deadly boring. But those fans aren’t simply there to fill seats: their loyalty to a cause runs deep into the politics and social fabric of the community they live in - female rights in Java, socialism in Liverpool, right-wing activism in Buenos Aires, the anti-fascist movement in Hamburg and political freedom in Casablanca. And so it was that I embarked on a project that meandered its way around the globe, only to end up in, em, Belfast!

Belfast, I hear you ask? Well, yes indeed. You see, to discover the authentic roots of arguably the most colourful group of fans in the world, known internationally for their dedication to defend the rights of the oppressed, it was imperative that I travel across the Irish Sea. Let me set the scene…

May 18, 2020. It’s the height of Covid restrictions and the world’s famous avenues and boulevards have fallen silent. That same day, the most extraordinary thing happens across the entire island of Ireland as thousands spontaneously take to the streets in celebration of Celtic winning the Scottish league for the ninth time in a row.

In villages, towns and cities, revelers dance and sing in salute to the achievement, yet nowhere could compare to the Falls Road which lit up in green, white and gold, accompanied by a cacophony of earsplitting car horns and blaring music - folk breaking every rule in the book, hugging and kissing as though there was no tomorrow, joined by a million-strong audience on social media.

But this wasn’t simply a celebration of success on the football pitch, for deep in the heart of all those revelers was a history of inequality, of powerlessness in the face of repression, and of challenging an unfair status quo.

Before making this film, I had been unaware that it was illegal for decades to fly the Irish tricolor in the North. To assert that part of their identity, nationalists had to travel to Glasgow, to Celtic Park, where they found freedom to express their Irishness.

The ethos of highlighting the cause of the oppressed that runs through the veins of Celtic fans stems from those roots. And however much the current board at Celtic might object to the following comment, the reality is that this is not a football club, it is a ‘movement’.

When Celtic became the first British team to win the European Cup, it was a victory for the underdog. When they halted the domination of the other major team in Glasgow, which had refused to sign a Catholic player for over six decades, it exposed the futility of sectarianism. That policy was abandoned soon afterwards.

When the Green Brigade changed street names in Glasgow to represent key figures from Black Lives Matter, they directly challenged racism.  And when those Palestinian flags flew in every corner of Celtic Park, despite dire warnings from UEFA, it sent a message to the world.

Just look at the adoring welcome Celtic fans gave and continue to give to that beautiful Lurgan boy, Jay Beatty. Ninety-million people around the globe would take Jay to their hearts following the day, back in 2014, when Georgios Samaras paraded him around the stadium. And who could forget Jay scoring the ‘Goal of the Month’ against Hamilton as the fans sang: “We love you Jay, oh yes we do, Oh Jay we love you”.

As his father, Martin, told me: “To take a little boy with Downs Syndrome, a bald head and big glasses and treat him with so much love and so much respect, no other club in the world would do that.”

Then there’s the President of Albania, Ilir Meta, who waxes lyrical in the film about how he met travelling fans in Sarajevo in 2019 and, from that day, he was hooked.

In the film, he announces plans for a massive event, to be held in his capital city. (I was later told that the President of Kosovo was a bit miffed when I didn’t interview him, as he sees himself as the biggest Celtic fan in the region.)

When the great John Fallon, 12th member of the Lisbon Lions, tells me he “lived the dream”, it’s not simply a reference to playing for the team, it’s about being a fan who was lucky enough to pull on the jersey.

When ‘Wee Duff’ from Belfast, who nearly died from a stroke, says “Celtic gave me a reason for living”, he’s talking about the community of fans who helped carry him through his worst times.

So, when some of you out there may contemplate suicide or worse at the results this season, take a moment to remember that Celtic is more than just a football team; much more.

The club IS the fans. I choose to end this article with the words of Glasgow-born Michael Law, just an ordinary fellow I met at the Lazio match in Rome. In one simple comment, he summed it all up: “Celtic has taught me anti-fascism, anti-racism and to welcome immigrants, which I am, being from an Irish background. It’s taught me to respect others and look after others who are less fortunate than ourselves.”
I couldn’t put it better.

The film will be broadcast by Al Jazeera on February 23 at 10.30pm and will be repeated each day for the following week at various times of the day. For those wanting to watch on their laptops, they can find the link on the Al Jazeera website