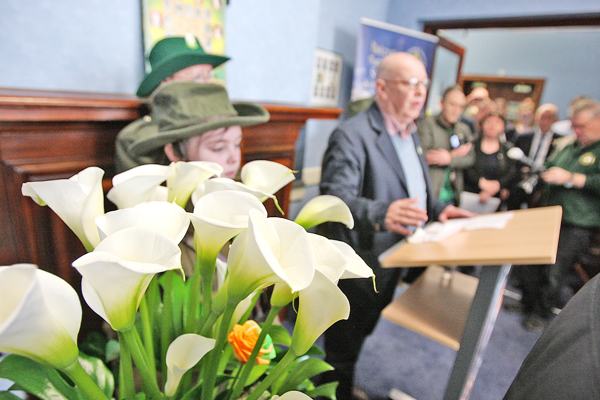 City Hall was the scene of the 2016 centenary launch of the Easter lily campaign yesterday.

Speaking at the launch, Joe Austin, Chairperson of the National Graves Association, welcomed those gathered and said: “It’s very important for the wider republican community that in the heart of our city we are able to celebrate an event that is central to us all.

“The more you find out about 1916 the more you realise that Belfast republicans were key to the execution of the Rising, through the Dungannon Clubs, the IRB and the Gaelic League.”

Comparing the men and women of 1916 to today Joe said: “It is almost beyond modern republicans to imagine the tenacity and courage of those men and women. They went out with the almost certain belief that they were going to their deaths, that has been the ethos of republicanism right from that point.

“In the aftermath of the rising when republicanism in Ireland appeared broken and scattered Cumann na mBan decided in 1922 they would reenact the spirit of 1916 by having a lily launch – the Easter lily was born.”

Belfast Lord Mayor Arder Carson also paid tribute to the men and women of the Rising, saying: “In this very historic year, it’s important to mark and remember the contribution and the inspiration these men and women have made to the republican struggle.

“They had a vision for national self-determination, equality and social justice, values that we still hold today.

“The leaders of 1916 came from a wide variety of backgrounds: educationalists, poets, artists and language enthusiasts. It was this uprising that inspired other nations to assert their right of self-determination and independence.”

He added: “These brave men and women gave their very lives for that cause, so it’s important at Easter that we come together, we have a responsibility and a duty

“It’s important at Easter that we come together to protect their integrity and the integrity of our struggle. It’s important to wear our Easter lily in memory of our comrades.”