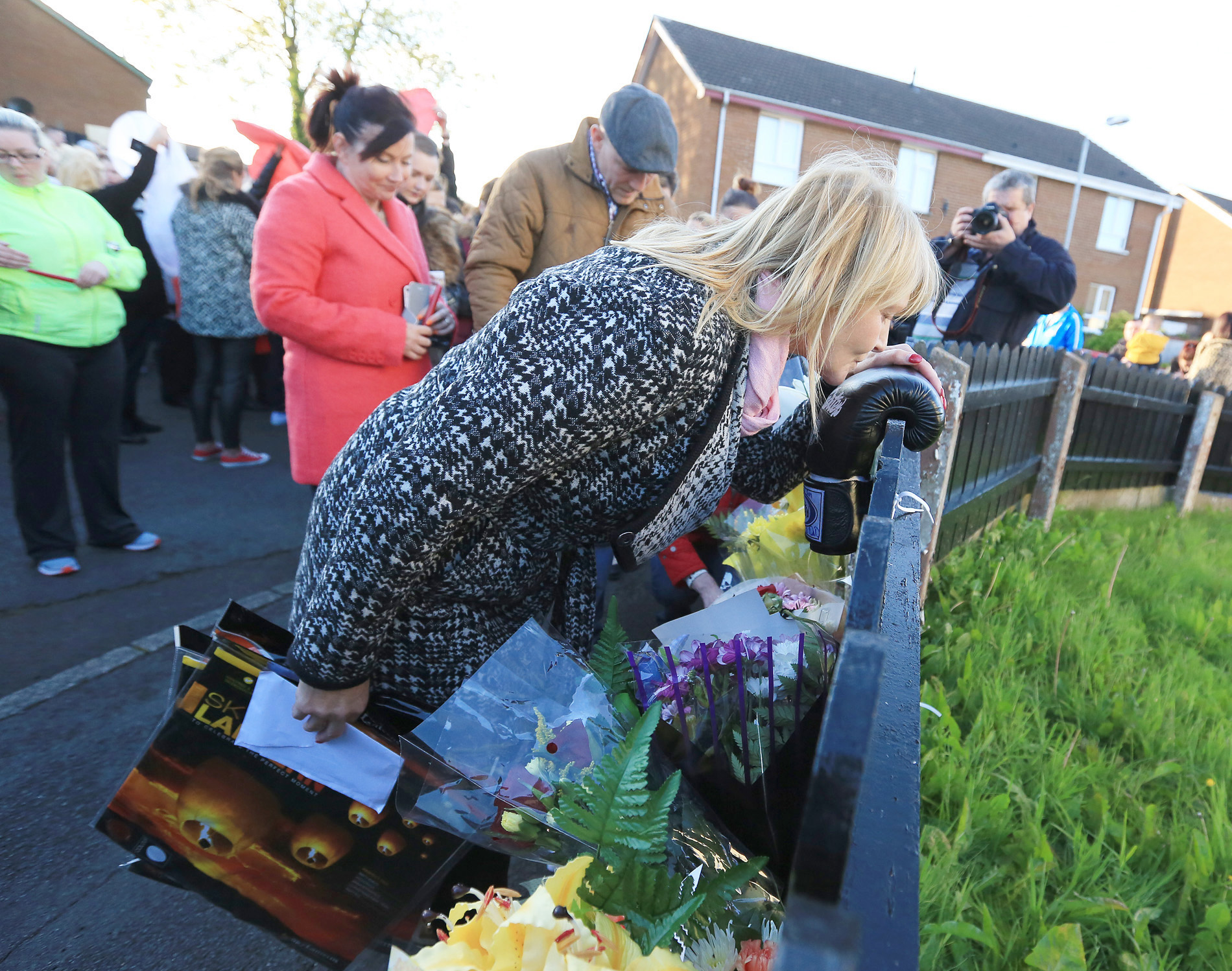 Eamonn Magee Jnr’s mother Mary kisses a single boxing glove left near the scene of the killing while his dad Eamonn Snr bows his head. Pic by Jim Corr

HUNDREDS of people came out to support the family of slain boxer Eamonn Magee Junior at a vigil held in his memory last night.

Eamonn Magee Senior and his wife Mary were backed by friends, family and sympathisers as they stood close to the scene in Summerhill Park where Eamonn Jnr was brutally stabbed to death in the early hours of Saturday morning.

During the vigil prayers were said and heart-shaped balloons and paper lanterns were released into the darkening sky in memory of the Ulster University engineering student.

There were emotional scenes as Eamonn Jnr’s family read messages on floral tributes left by the garden where Eamonn Jnr lost his life. His mum Mary bent to kiss a single boxing glove placed carefully on the fence.

Local Sinn Féin MLA Jennifer McCann told Daily Belfast that the Magee family had asked her to thank the local community for all their help and support in the difficult days since Eamonn Jnr was killed.

“The community is very much still in a state of shock that a young man’s life could be taken in such a brutal and callous way,” she said. “Eamonn was a young man with his whole life in front of him and we saw from the hundreds of people who came out last night and in the tributes paid to him that Eamonn was a much loved and well respected young man.

“A family friend read out a beautiful heartfelt letter by Eamonn’s sister, Áine Máire, the letter was extremely emotional and paid a great tribute from her to her brother, who was also the Godfather of her son Cormac.

“We will continue to rally around the Magee family during this most traumatic of times especially as the family prepare to bury Eamonn on Friday.”

Also in attendance was local SDLP Councillor Brian Heading who described the vigil “as the saddest event I have attended”.

“The Twinbrook community have shown great support to the Magee family at this difficult time,” he said. “I would like to extend my deepest sympathy to the entire Magee family circle.”

32-year-old barman Orhan Koca, of no fixed abode, appeared in court yesterday charged with Eamonn Jnr’s murder. He was remanded in custody and will appear again at the end of the month.

Eamonn Magee Jnr’s remains will leave the family’s Hannahstown Hill home at 10am on Friday for 10.30am Requiem Mass at the nearby St Joseph’s church.