Everyday items used to reflect on the story of the conflict 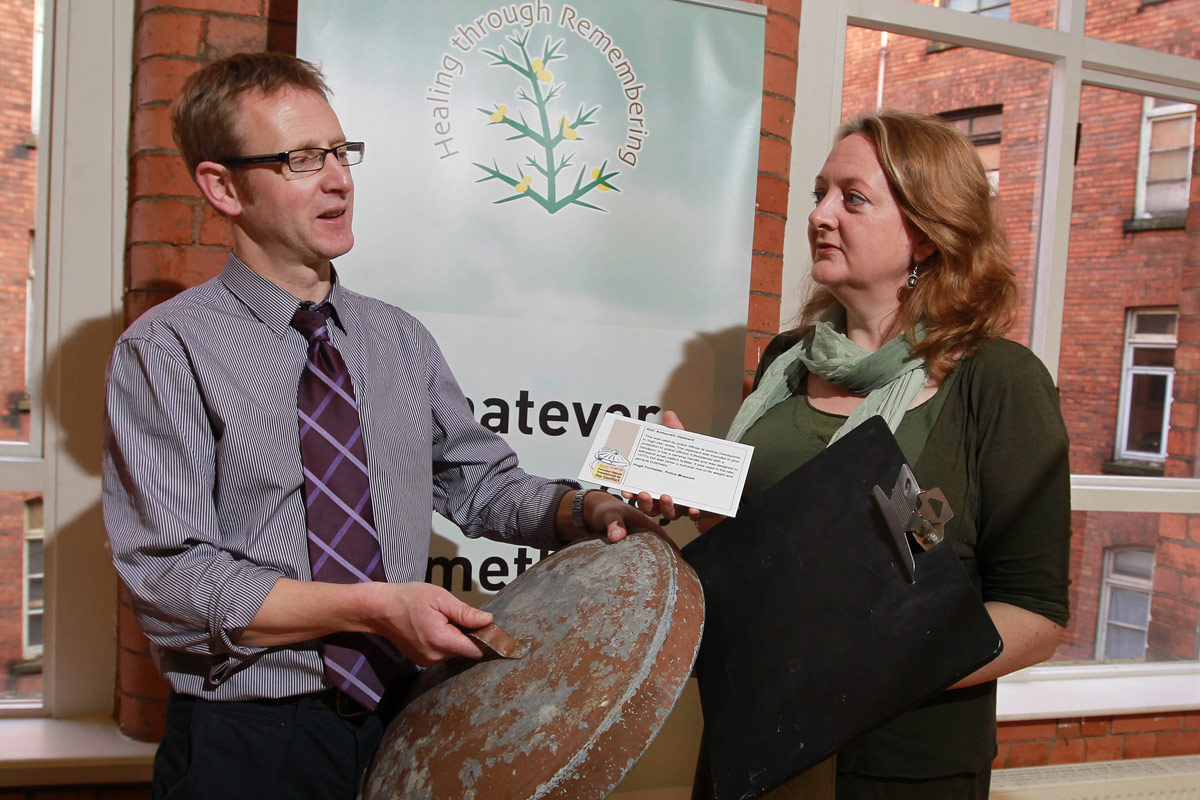 A new exhibition looking at how everyday objects were shaped by the Troubles is currently running in South Belfast.

Featuring everything from bus tickets to badges, ‘From Everyday Life – Items of the Conflict’ is the brainchild of Healing Through Remembering, an Ormeau Avenue-based post-conflict group that works to find ways to discuss the past here.

The exhibition is made-up of items donated by individuals and others, including museums and organisations, and is a pilot project ahead of a tour of yet to be determined venues between February and April next year.

Kate Turner, director of Healing Through Remembering, said the items were from all sections and were tempered by the conflict here.

“We are using a bin lid as the symbol for the exhibition as it was used as a communications tool in nationalist areas. We also have a bullet-proof clipboard that has been lent to us from the Police Museum. It gave protection to officers who stopped anyone at a checkpoint but they were so heavy that they were quickly decommissioned.

“Two other items of real interest are a badge with a piece of sponge attached to it, which were worn by loyalists after the Prime Minister Harold Wilson called them spongers in 1974.

“The other one is a bus ticket from the 1970s that had the confidential police number on it. To people growing up here that sort of thing was just normal but for anyone else, it’s bizarre to see such an everyday object changed like that.”

Kate said the pilot exhibition will also include other sound recordings, photographs and videos showing everyday events during the conflict.

“We have a tape recorder which was used to record Radio Free Belfast, the pirate radio station that was manned by Civil Rights members in the late ‘60s. There is also an actual sound recording from the station, which is quite amazing to hear.

“Another man who was a history teacher realised he was living through history and so recorded the news each night. We have got excerpts from it, largely of car bombs because they are again everyday items turned into something different due to being filled with explosives.

“Some of them even show the streets around our building here in Ormeau Avenue, it’s a strange sight to see bombs going off there.”

Kate said she hoped both the pilot and full exhibitions would recognise the work done by the collectors.

“Some of the items came from institutions such as museums and some individuals but it will be good to acknowledge what they have done and also to thank them.

“Many of them came from areas of collections that people might not have seen otherwise, so it will be good to get them out there and be seen by more than would have originally.

“It will also be about having a discussion about what we need to do rather than leaving the responsibility to some government department. Let’s have a discussion among people here to ask what do we do about the past and how do we do it in a way that lets all of us express our voices without annoying or upsetting each other.”

Kate added that the future for the exhibition had yet to be decided and would be coloured by responses to the pilot version.

“Our intention is to take this out to community venues around Northern Ireland and the border counties at least because our audit covers this island.

“People have already suggested different places but we want to take it to communities themselves rather than just the city centre. It’s great that we’ve started this conversation and we need to make sure what we do meets everyone’s needs.”

The pilot exhibition runs at Healing Through Remembering’s Ormeau Avenue offices until November 25, on Monday, Tuesday, Thursday and Fridays from 10am – 4pm and Wednesdays from 10am – 6pm. The exhibition will be travelling across Northern Ireland and beyond between February and August 2012. To suggest a suitable venue to host the exhibition, contact the organisation on 90 238 844 or email exhibition@healingthroughremembering.org.