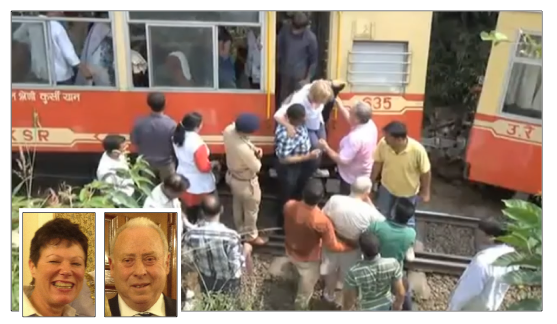 The aftermath of the train derailment and, inset, Avril and Ken Morrow, who were on board the train when it left the track

A South Belfast woman administered life-saving first-aid to a victim of the weekend Indian train derailment which claimed the lives of two British tourists, Daily Belfast can reveal.

The woman and her husband were passengers on a luxury train which left the track on Saturday, causing two fatalities. They’ve spoken exclusively to Daily Belfast about the horrific aftermath of the crash and how they spent part of the journey in the company of one of the victims.

Avril and Ken Morrow were among 37 travellers enjoying the first leg of a dream rail journey from Kalka to Shimla in the foothills of the Himalyas when disaster struck as the train rounded a sharp bend.

Ken, a member of the Irish Railway Preservation Society, feared the worst as the driver of the three-carriage train took the bend.

“I felt like he was going at around 30mph at a stretch of track where newspapers reported the recommended speed was 18kmph,” he said, speaking to us from Shimla. "I felt the wheels grinding and we were leaning so far to the left that we were hanging in mid-air. Then I heard the thump, thump, thump of the rails leaving the track before an almighty crash as the first carriage bounced off the embankment.”

The Morrows were travelling in the second carriage, which also derailed but where injuries to passengers were largely confined to cuts and bruising. In the first carriage, however, two women were thrown through the glass windows of the train and grievously injured.

Both Ken and Avril made their way down from their upended carriage to help with the wounded.

Avril, a trained first-aider, worked to revive one woman who had been catapaulted from the first carriage and was covered in blood from head and facial injuries.

“She turned black in front of me,” she recalled. “I was actually told later that she had died but thankfully she survived and is still in intensive care.”

However, another passenger thrown from the train on to the embankment died instantly. She has been named as Lorraine Toner (60) of Sheffield.

The second fatality occurred after the accident when Joan Nichols (71) from South Shiels who had survived the crash suffered a heart attack.

“We had spent four hours on the first train journey with Joan and her husband John,” said Avril. “After the crash I saw Joan walking down the tracks with John who was badly cut around the head. She looked unhurt but apparently she suffered a heart attack in the hospital and died."

As the accident happened in an inaccessible stretch of line, it took around 20 minutes for ambulance crews to reach the scene.

“We had to make our way down the tracks, some the women in high heels, others barefoot, to reach the ambulances,” said Avril.

At the nearby hospital, emergency teams were on hand to look after the victims.

The couple have decided to continue with their holiday.

“I was planning to go home until I heard the lady I was working on was still alive,” said Avril. “That put a different perspective on matters. It was a terrible tragedy and my thoughts are with the families of those who died and with those seriously injured."

It was opened in 1903 to connect Shimla, the summer capital of British India, with the northern plains.

The railway climbs more than 4,000ft (1,200m) through the Himalayan foothills and is famous for its many bridges, tunnels and panoramic views.

Dramatic footage of the train moments before the derailment has been obtained by the BBC and can be viewed at http://www.bbc.co.uk/news/uk-34238033