EYE ON THE PAST – June 1981: March to show support for hunger-strikers Kieran Doherty and Joe McDonnell 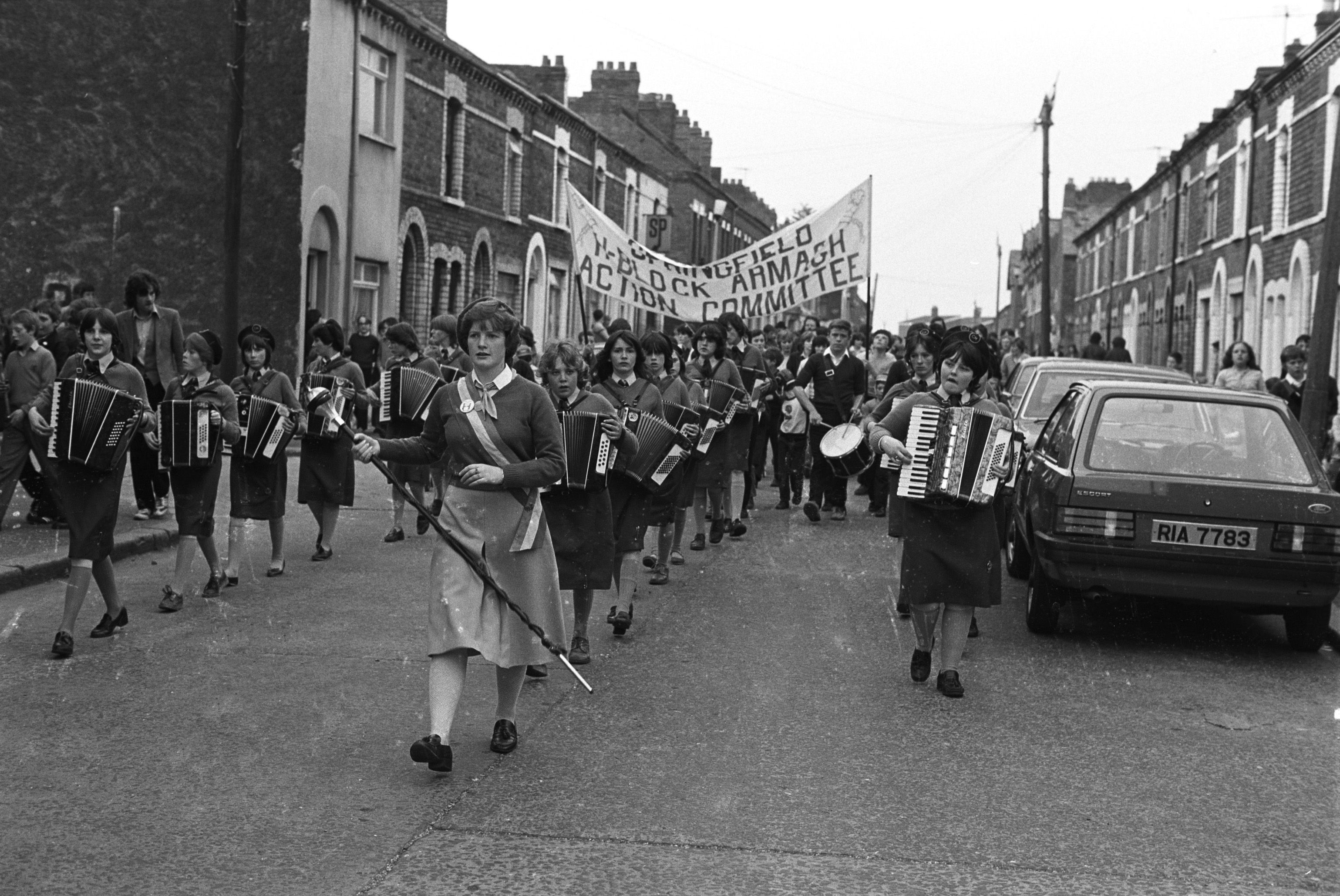 SUPPORT: An anti-H-Block/Armagh parade on the Springfield Road

AN agreed strategy has been worked out between the West Belfast Shopkeepers’ Association and the Belfast H-Block Committee on the organisation of future demonstrations and stoppages arising from the present H-Block crisis.

The shopkeepers have felt for some time that a lack of co-ordination has left their members at a serious disadvantage when deciding how to show their concern at the plight of the hunger strikers, and yet provide their usual service to the community.

“We are an essential part of the social fabric in the mainly working class areas of West Belfast, and any uncoordinated action on our behalf can have serious consequences for the community,” said a spokesman for the shopkeepers.

“Many old people and families with young children, depend on us for basic food necessities, and we feel that this agreement with the H-Block Committee on future stoppages is essential if these people are not to be put at a disadvantage.”

All shopkeepers are being asked to contact their own association before taking any action which would entail a closure of their premises.

The Belfast H-Block Committee say that this new arrangement should remove all doubt about future protest action, and relieve some of the pressure placed on shopkeepers because of the present situation.

“We appreciate the service the shopkeepers give to the community, and would ask all local committees to ensure that they are not pressurised in any way by unauthorised individuals.”

Meanwhile, a major H-Block march will be held this Sunday from the home of Kieran Doherty to Joe McDonnell’s home.

The march leaves from  Commedagh Drive at 3pm and will go to Lenadoon Avenue. It has been organised jointly by the Hunger-Strike Committees in Andersonstown, Lenadoon and Turf Lodge. Alex Maskey, one of the joint organisers, said: “We are expecting everyone in Andersonstown, Lenadoon and Turf Lodge, who supports the prisoners, to attend this march to express their solidarity with the families of these two local men.

“The march is being organised by the H-Block Committees in all three areas, and will be the first major example of the greater co-ordination which was begun last week. The details have been worked out so that all those who want to support the two local families will know about the march and will be there.”

A Moyard man, 25-year-old Paul Hanna, was attacked by a joint Britsh Army-UDA patrol. He was beaten and kicked about the head and body; he was struck with a rifle butt; he had the letters IRA carved on his wrist; and only for the intervention of two of the British soldiers he believes that the UDA men and another soldier would have killed him.

When our reporter interviewed and photographed him at 11am on Friday morning, he was still in a highly agitated and distressed condition, and broke down several times during the interview.

He reported the attack to the RUC at New Barnsley and was advised by one constable to pursue his case against the soldier involved; however, an RUC inspector advised him that the case could rebound on him.

“It’s only your world against the word of these soldiers,” he said.

At 1.45am on Friday morning Mr Hanna was going home up the Springfield Road. As he approached the British Army sentry box opposite Springmartin Road he saw a group of three British soldiers, and eight or nine “civilians” dressed in combat jackets and wearing black armbands.

These men stopped him and one of them asked: “Where the f**k are you coming from?” Mr Hanna explained that he was coming from Springfield Road Barracks, where had been held for about forty-five minutes after having refused to give his name to a British soldier at the Ballmurphy Bullring earlier in the night.

The UDA men grabbed him and tried to drag him into Springmartin Road, but the soldiers insisted that he be brought to the sentry box. There he was kicked and beaten about the head and body. One of the soldiers struck him on the head with a rifle butt, and the UDA men carved the letters IRA on his wrist. The UDA men pursued him, but he made his escape into Springhill where he raised the alarm and a crowd gathered. The UDA man had disappeared by this time.

HOW would you like to live between two rubbish dumps? Or sleep in a room with damp patches on every wall and a bucket underneath the light fixture to catch the water? Or to guard your children day and night against attacks by rats? Or to pay extra rent for a view of the over-flowing skips and Fort Jericho (so-called because the wall keeps falling down)? If you would like to live so, then apply for a flat in Norglen, Turf Lodge. The residents there would be glad to swop with you any day.

Mrs Sheila O’Hara whose husband has a heart condition has lived in Block 209 for nine years. Even then she applied to be re-housed anywhere else, and has been promised rehousing by the Housing Executive. She’s still there, and she’s afraid she’ll still be there in three or four years’ time when the flats are demolished.

“Dampness has always been a major problem in this particular block,” she told our reporter this week.

“Electrical wiring is a hazard, drainage systems have never worked, and each flat has either a leaking roof or water flowing through the walls. Rats and mice outnumber the tenants. Just two months ago a five-year-old girl, Kelly Hale, was taken to Purdysburn Fever Hospital with hepatitis after contact with a rat. She spent ten days in hospital, but she was very lucky. The next child may not be.”