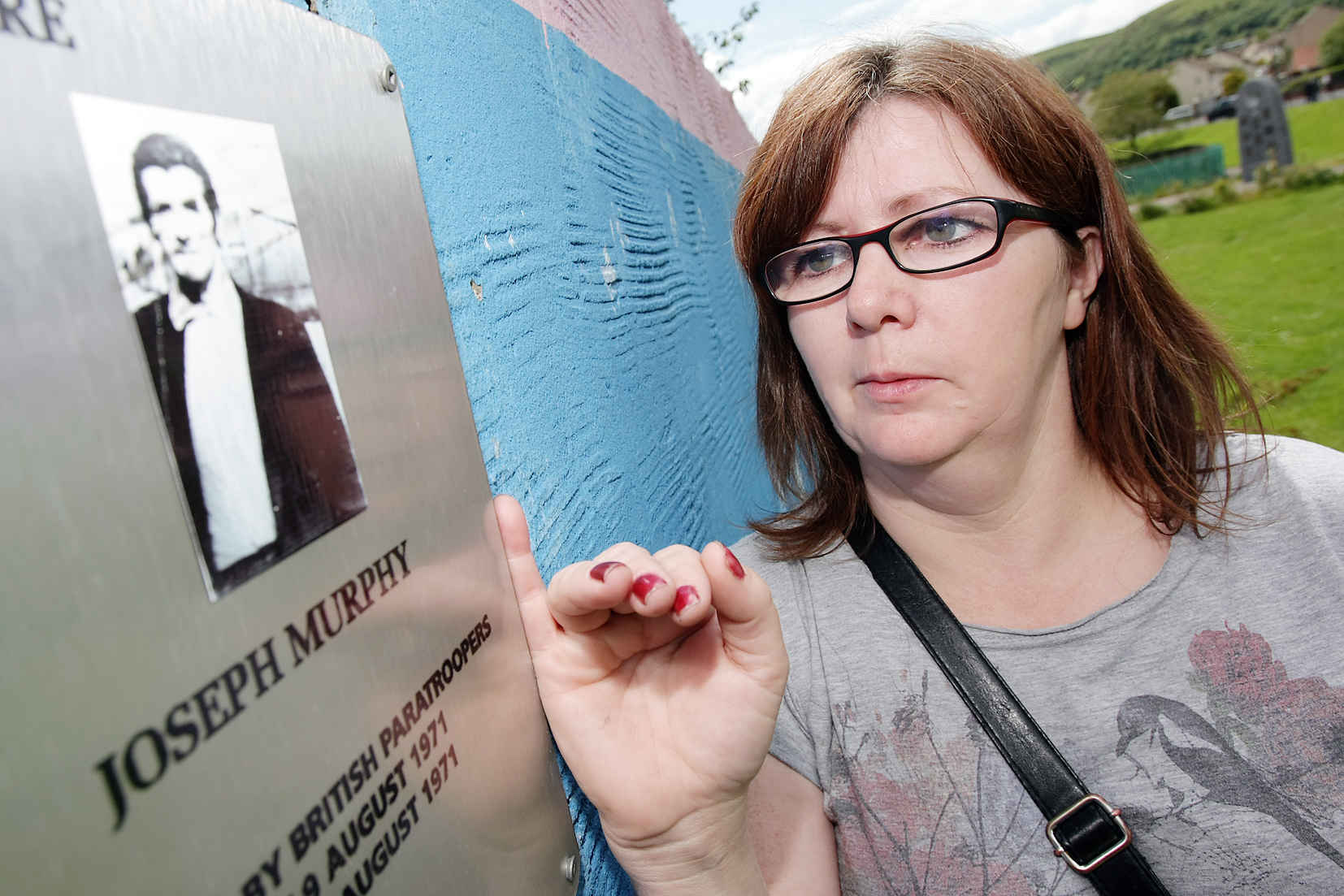 Janet Donnelly at the spot where her father, Joseph Murphy, was shot – she believes the family is getting closer to finding out the truth about his murder

After yesterday’s sensational news that a bullet has been found lodged in the exhumed body of one of the victims of the Ballymurphy Massacre, the family of Joseph Murphy now face another wait for the forensic details of the newly-discovered round.

Relatives of the murdered father-of-12 took the decision to apply for yesterday’s exhumation on the back of their dying dad’s claim that he had been shot again by the British army while he lay wounded in the Henry Taggart base. That decision appears to have been vindicated by yesterday’s find, but it may be several weeks before the results of tests carried out on the bullet are made public.

Mr Murphy was shot once in the leg during the August 1971 rampage by the Parachute Regiment which claimed the lives of 11 people. He told his family before he died that he had been beaten by British soldiers and that a shot had been fired into the open wound in his leg.

Much rests on whether the bullet found in Mr Taggart’s body is a 7.62 standard NATO round from a British army-issue SLR rifle, or whether it is from a sidearm. Those killed by gunfire during the massacre were shot with the same rifles the same regiment used on Bloody Sunday, just six months later. It is possible – but unlikely – that a high-velocity SLR round lodged in Mr Murphy’s leg after he was shot on the street. The existence of a medical deposition referring to an entrance and exit wound in the victim’s leg also makes it unlikely that the bullet found yesterday was from an SLR. Should the bullet turn out to be a lower-calibre round from a handgun, that will have massive implications for the Ballymurphy families in their quest for justice.

This morning, Mr Murphy’s daughter, Janet Donnelly, told Daily Belfast she “cried tears of joy” when she was notified yesterday that a bullet had been found in her father’s body.

“The Ballymurphy families did everything we could to try and gather as much evidence as possible to build our case and the exhumation of my father’s body was the next step,” she said. “We did everything we could before we had to take this step. My father told my mother that when he was in the Henry Taggart he had been shot in the right thigh and beaten. Two years ago the Historical Enquiries Team found evidence to suggest a bullet hadn’t been removed and it was based on that that we decided to exhume his body. To find the bullet after all this time is massive for the Ballymurphy families and our case. What my daddy told my mummy was true after all these years. We have come a long way and the news on Tuesday just makes that point even clearer. Finding that evidence is brilliant for our case and I believe we are getting closer to finding out what happened.”

In March last year, Janet described to the Andersonstown News why the decision was made by her family to seek yesterday’s exhumation.

“We have information that only came to light in the past two years from a HET report that indicates there was a bullet left in daddy’s body.” she said. “A deposition – one that was never brought before a court – from a doctor who treated him said one bullet was left in daddy’s body but there was also an entrance and exit would from another bullet. My father always claimed that he had been taken to the Henry Taggart army base, was beaten and then shot into his open wound.  Our only option now is to exhume the body and recover the evidence, the bullet.”

West Belfast MP Paul Maskey said the news was a significant step forward for the families.

“Joseph Murphy’s body was exhumed in the search for justice and it looks like a bullet has been found,” he said. “This is a significant step forward in the quest for justice for the Murphy and the other families of this massacre. The families have been campaigning for many years and hopefully the British government now do the honourable thing and grant them their inquiry. This is a very emotional time for the family but they have been very determined in their pursuit of truth and justice.”

Mark O'Connor, the family solicitor, said: “It is a great relief, it’s a day I think for the family of mixed emotions. It’s obviously a very solemn occasion, in the graveyard, it's been a very difficult day for the family as well, but I think they’re happy that they've got the right result at the end of it.”