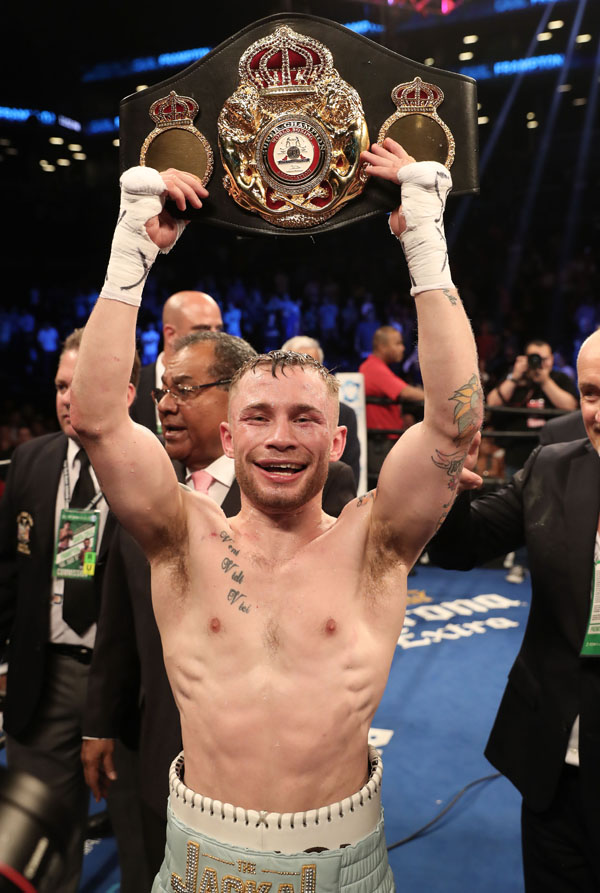 IT was a night to remember for Carl Frampton and the city of Belfast on Saturday night in Brooklyn as 'The Jackal' prevailed in a classic battle against Leo Santa Cruz to claim the WBA featherweight title, writes David Mohan in New York.

Frampton was certainly a worthy winner in a fight for the ages, with both men trading in a ferocious battle that left the American fans and media in attendance purring while the large and noisy 'Jackal Army' celebrated wildly.

The result ensures the 29-year-old is now a two-weight world champion – the first man from the north to do just that and second Irish boxer behind Steve Collins to claim titles in two divisions – he won the same belt held by his manager and mentor Barry McGuigan 31 years ago.

It was certainly a night that will never be forgotten by anyone in attendance and Frampton said after that it is the type of battle he has always wanted to be a part of.

"I don't know if it's sunk in yet, but I think that's going to be a fight that will define part of my career," said a beaming 'Jackal' after the fight.

"I want to be involved in big fights and tonight I've made history. I'm the only Northern Irishman to win world titles in two different weight divisions and I've just beat an incredible fighter in Leo Santa Cruz – a three-weight world champion.

After a quiet opening round that the champion may have just shaded, the action exploded in the second with Frampton's best weapon on the night – his left counter – catching Santa Cruz flush as the Mexican staggered back on to the ropes and looked for a moment as though he was about to be taken out.

This sent the Frampton fans wild as their man was to dominate the next three rounds with his movement quite simply brilliant as he left Santa Cruz swinging at thin air for the most part while landing his own shots.

The defending champion – noted for his volume punching – looked a little reluctant to open up due to the thudding counters going in from Frampton.

The fight was getting away from Santa Cruz who managed to rally in the sixth and seventh as Frampton played into his hands a little by standing and trading as the this contest entered 'fight of the year' territory.

Santa Cruz was now looking much better, with his output beginning to increase, but too often he was hitting gloves or made to miss while the eye-catching shots were coming from the Belfast man who was banking the rounds.

Both men were to trade on numerous occasions with the action relentless as the decibel level went off the charts inside the arena.

Santa Cruz seemed to know he had to pull out something special in the 'championship rounds' and he enjoyed a big 11th that began with a massive right, but the sound of the bell was greeted by Frampton defiantly raising his glove to salute his fans.

However, he seemed to be rocked by a right early in the 12th, but certainly recovered as the final seconds saw both men throw everything at the other to cap a fight that will be remembered for a long time to come.

After a nervous wait, the magic words: "And the new" were heard as the Barclays Centre erupted.

It was a night that will never be forgotten for a number of reasons and Frampton proved he had the heart as well as the skill to dethrone a three-weight champion and as tough a Mexican as they come.

"I think one of the judges had it a little bit wider than it should have been if I'm honest," he admitted.

"I could have made it easier on myself, but I fought with my heart at times instead of my head. I think I just wanted to be involved in one of those fights and I think people will remember that for a very long time."