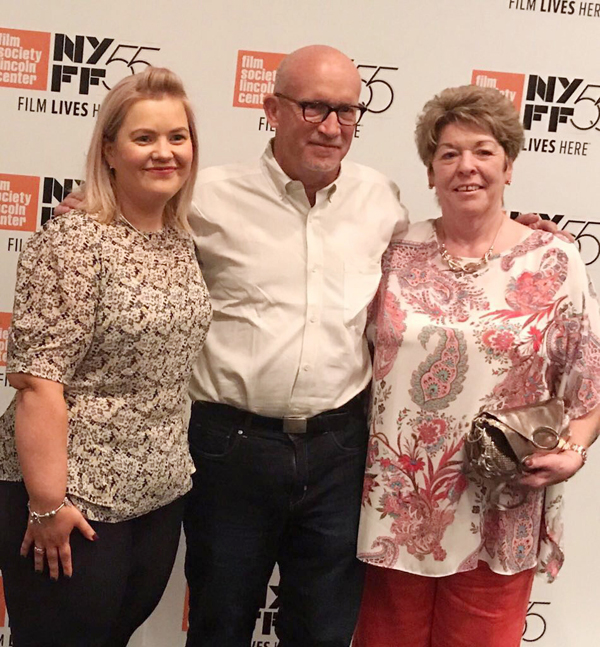 Emma Rogan (left) whose father Adrian was killed in the Heights Bar, with Moira Casement, the niece of victim Barney Green, and director Alex Gibney

A DOCUMENTARY on the Loughinisland massacre made by an Oscar-winning director with the assistance of a former Belfast Media Group journalist had its world premiere in New York on Saturday night.

And ‘No Stone Unturned’ also reveals the killers’ links to Belfast. The documentary, based on work carried out by former Andersonstown News journalist Barry McCaffrey and the families’ solicitor Niall Murphy, had was shown at the New York Film Festival.

In the documentary, the murder of Belfast man Martin Lavery is linked to the killer gang and they even name the chief suspect in the massacre for the first time. Barry told us the film broke new ground.

“The film is important because for the first time a detective is on camera saying he believes there was collusion in the case,” he said. “Jimmy Binns tells us when two suspects presented themselves for interview at Tennent Street he was told what suspect he was allowed to speak to and which one he wasn’t. He was told what the suspects he was allowed to interview would say and, more importantly, what they wouldn’t say.

“He says he felt someone was being protected and there were people above him who were happy for this to happen.”

Last year the Police Ombudsman report into the Loughinisland Massacre linked the murder gang to the killing two years previously of Housing Executive worker Martin Lavery. He was shot dead in his upper Crumlin Road home on December 20 as he wrapped Christmas presents with his five-year-old daughter. The report says a Browning 9mm handgun used to kill Mr Lavery in 1992 was used in the Loughinisland killing and the supply of the murderers vehicle and boiler suits for both incidents can be linked to the Belfast UVF on the Shankill Road.

“A forensic examination of the murder scene recovered spent bullet cases, which identified the weapon as a 9mm pistol recovered by police following the murders at Loughinisland,” the report states. “There are similarities in the ‘modus operandi’ between this murder and other attacks including the Heights Bar, Loughinisland, some twenty months later. These include the supply of a car and boiler suits from Belfast and the indiscriminate discharge of firearms into a public house frequented by members of the local community.”

The report said Ombudsman investigators questioned ‘Officer 4’ who investigated Martin Lavery’s killing and its links to Loughinisland. It continues: “While Officer 4 was not the SIO (Senior Investigating Officer) in respect of Mr Lavery’s murder, my investigators asked him about his knowledge of the incident and the utilisation of the intelligence and firearms linkages, which were relevant to the serious crime in South Down, for which he had investigative responsibility. The officer stated he had no knowledge of the Martin Lavery murder enquiry or of any link to the murders in Loughinisland.”

Barry says the question that remains unanswered is what the intelligence services hoped to achieve.

“The police protected informers and sacrificed civilians because of what they called the ‘bigger picture’ in intelligence terms. But the question has to be asked, what was the point if it didn’t prevent innocent people getting killed?”

No Stone Unturned is a Fine Point Films production and will be released in Ireland later this year.