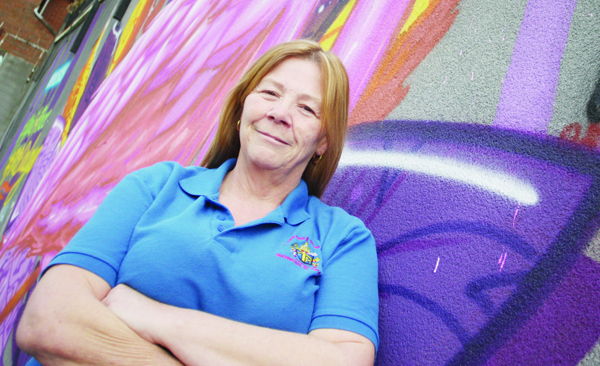 JOHN Paul II Youth Club in Ardoyne was founded in 1972 amidst violence that would mark the year as one of the bloodiest of the recent conflict.
The youth club’s first home was in a disused shop on Herbert Street, just yards from where a number of nationalist were burnt out of their homes just a few years earlier.
Jacqui Maguire, a senior youth worker at John Paul II, was just nine years old when she attended the club’s first ever event on Halloween night in its formative year, and has been involved with the club ever since.
Reflecting on those early days, Jacqui recalled how, in the hardest of times, local people rallied to provide a safe haven for young people who needed refuge from regular rioting and shootings on the nearby Crumlin Road.
“The kids needed social interaction, but they were getting out of school and then going into the house because of the shooting and the rioting,” she explained.
“There was an old shop that they cleared out and used for discos and wee parties.
“The word went about that there was a youth club opening and everybody came from everywhere. In the beginning it was just used as a place for the kids in the street to play, but it just got bigger and bigger.
“It was used as a nursery and mothers would meet there at night-time. It was like a social club rather than a youth club.
“At the time Mr McLaughlin in St Gabriel’s said there were lads at the school who needed apprenticeships, so he would have brought them down and they were doing a bit bricklaying and plumbing and cleaned up the building.”
Despite its less-than-humble beginnings, Jacqui’s early memories of the youth club are happy ones of a community that did its best in difficult circumstances. She recalls discos in Herbert Street, sports competitions and – despite it being the height of the Troubles – cross-community trips away. It was also those formative years that set Jacqui on the path to youth work.
“Every night there was something different going on,” she recalled.
“We also went on cross community trips, and we went to Cork with Cedar Lodge Youth Club. We used to go to Cork in the week of July. Later on we would have gone to Donegal. It was really a way to keep us off the streets.”
She continued: “The club got us to do wee junior committees, got us to volunteer and help the young ones, and it stopped us being out there causing trouble. That’s the way we run this club as well. There are all different age groups that help with the younger ones. It’s called peer leading now, but it wouldn’t have been called that in those days.”
Moving from an old disused shop to two burnt-out houses in the area that were renovated, the youth club eventually got its own purpose built building, which was opened by Liverpool and Ireland player Steve Heighway in 1978. That came after local people, including Jacqui’s father Owen Maguire, and her late mother Bridie Maguire, lobbied the then Secretary of State, Lord Melchett, to obtain £250,000 in funding for the club’s new home.
While kids with few other facilities flocked to John Paul II Youth Club in its early days, the club has only grown since then. Two years ago a new extension was built at the club and plans are already under way to build a new amphitheatre and all-purpose sports pitch in early 2019.
John Paul II Youth Club has been an integral part of the lives of many people in Ardoyne. Jacqui represents just one of four generations of her family who are currently involved with the club and said its growth is a real source of pride to her.
“It’s hard to believe that a group of women way back in the 70s even knew about social policy, or knew how to take those steps to build a club,” she said.
“I will also say that it has been the members and the community that have been the backbone of the club. We could see what it did for us and we want to make sure pass that on to the next generation and the generations after that.
“It’s a safe haven for the kids. Our young people know they can come in and there is enough staff of different ages and different levels for them to work with them. Young people will have particular staff that they will really gel with. We have a lot of programmes, a lot of personal development, a lot of buddy programmes, but it doesn’t all have to be high-flying – sometimes it can just be sitting down with somebody to talk.”
Like all community groups, John Paul II Youth Club has had its challenges, particularly in the area of funding. However, volunteer hours, care and hard work from staff members combine to keep the club open six days a week. For the young people, the outcome is better social lives, learning opportunities, and the instilling of a strong set of values amongst which empathy is to the fore.
“Our motto is sharing is caring,” Jacqui said.
“They learn acceptance and understanding of others. It doesn’t matter who they are or what they are – you respect them. It doesn’t matter what anybody’s issues are, you always give them a second chance, because we can all mess up first chances.”