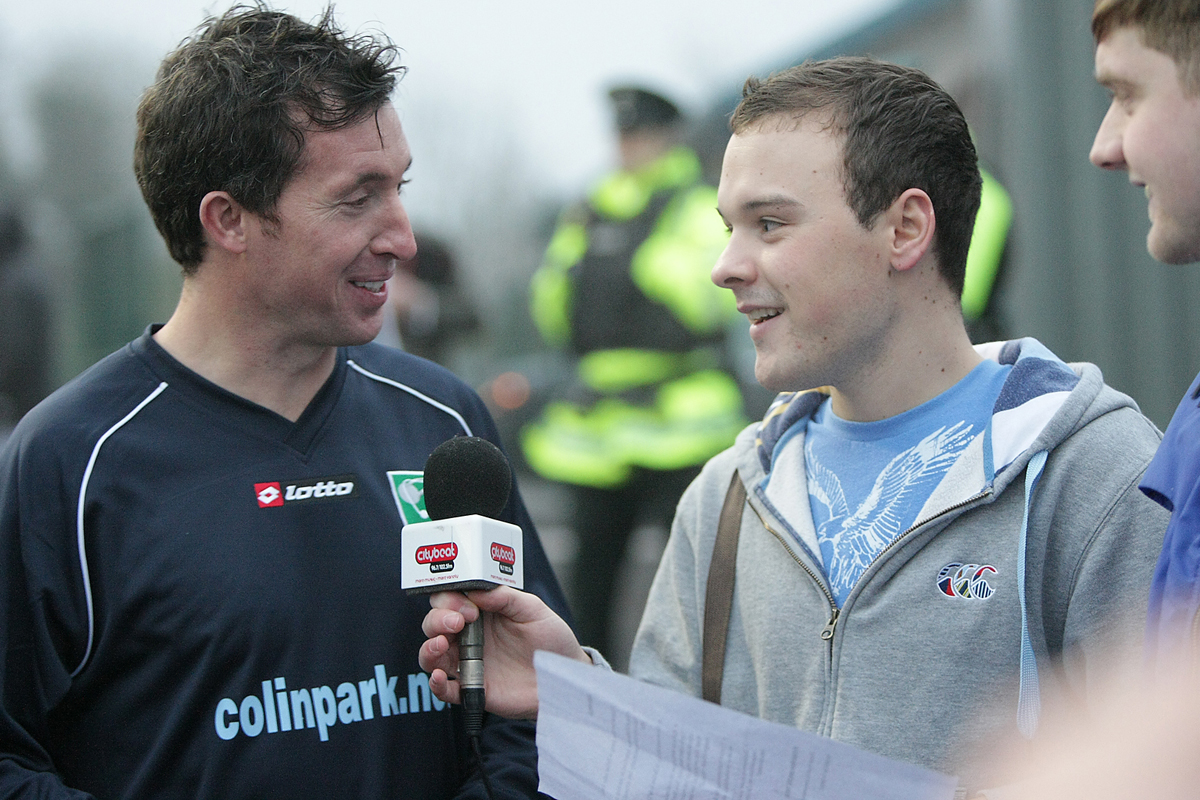 Known to Liverpool fans simply as ‘God’, following two successful spells at Anfield, which included 128 goals, the Kop hero was the guest of honour at the Blacks Road nine-hole golf course and sports centre.

Hordes of worshippers flocked to catch a glimpse of Fowler who made a fleeting visit to West Belfast before jetting back to England to join Jeff Stelling and the ‘boys’ as a pundit on Sky Sports’ Soccer Saturday.

After hitting a few golf balls at the Colin Park driving range, under the watchful eye of in-house pro, and close friend, Peter Martin, the 36-year-old made his way to the state-of-the-art 3G pitches, where over £475k has been invested in conjunction with Sport NI’s Sport Matters Community Capital Programme.

Youngsters from local clubs including Suffolk FC and Glendowan, as well as school teams from Malone College, showcased their talents in front of the former England international who was capped 26 times for the Three Lions.

His bravery was unquestionable as he answered questions from the local media beside hurlers from St Mary’s CBGS who were put through their paces by teacher and Antrim star Paddy Cunningham.

As the sliotars whistled through the air at high speed beside him, the somewhat wary Merseysider expressed his gratitude at being asked to open the new facilities and drew parallels between Liverpool and Belfast.

“Belfast is like Liverpool in many ways. The people have great pride in their city, there is a real sense of community spirit and of course there are many talented footballers,” said the fourth highest scorer in Premier League history.

“Sport has a very important part to play in improving health and the well-being of all our communities, particularly in more socially deprived areas and I’m delighted to lend my support in launching Colin Park’s exciting new facility, which I know will have a positive impact for people across West Belfast and beyond.”

After breaking into the Anfield first team in 1993 under Graeme Souness the lethal, left footed striker made an immediate impression.

But it was under Roy Evans when Fowler really flourished, helping the Anfield club to League Cup glory in 1995. The personal accolades also rolled in as he was named PFA Young Player of the Year in 1995 and 1996.

In 2001 he played a key role in Liverpool’s cup treble as the Reds landed the League Cup, FA Cup and significantly the Uefa Cup after beating Alaves in a thriller in Dortmund.

Under Gérard Houllier he found opportunities limited and was forced to seek pastures new. Following his Anfield exit Fowler had spells with Leeds United and Manchester City before returning to his spiritual home for one season during the 2006/2007 campaign.

Stints at Cardiff City, Blackburn Rovers, and sojourns to Australia and Thailand, featured in the latter stages of his career. Everywhere he played Fowler scored goals.

That’s not something Liverpool’s record signing Andy Carroll can say after arriving from Newcastle in January 2011 for a hefty £35million price tag. While the pony-tailed target man has struggled in front of the posts since his big money move, Fowler is convinced Carroll can cope with the huge burden of expectation on his shoulders.

“I think Andy will tell you himself that he has not been prolific, but he’s a good player,” insisted Fowler.

“You only have to look at his form at Newcastle before he came to Liverpool and it was fantastic. Maybe he might have felt the expectation and pressure about coming to Liverpool a little bit, but I think he will come good. He’s too good of a player not to, to be honest. If he is playing well and scoring goals then it means Liverpool are playing well and winning games.”

Essentially that’s what it boils down to for Fowler. He is still very much a Liverpool supporter and is desperate for the good times to return to Anfield.

With a League Cup final appearance against Cardiff at the end of February in the bag, and having lanced arch-enemies Manchester United in the fourth round of the FA Cup, Fowler believes Kenny Dalglish could be set to add to the club’s historic trophy haul this season.

“I think the league is obviously the main priority and everyone knows that. But in saying that when you do get to cup finals, and get a good run in the cup, it’s great for everyone’s confidence in and around the club,” added Robbie.

“If you do well in cups then the league form will be much better. Fingers crossed they win one and do well in the other one and get that fourth place in the league.”

After fielding questions from journalists, Fowler then evaded tackles during a friendly five-a-side game on one of the new 3G pitches at Colin Park.

Inevitably it wasn’t long before Fowler found the back of the net with a clever trademark finish.

Now forging a living as a pundit, the ‘Kop King’ will hope he is as sharp in the studio as he was in the box.