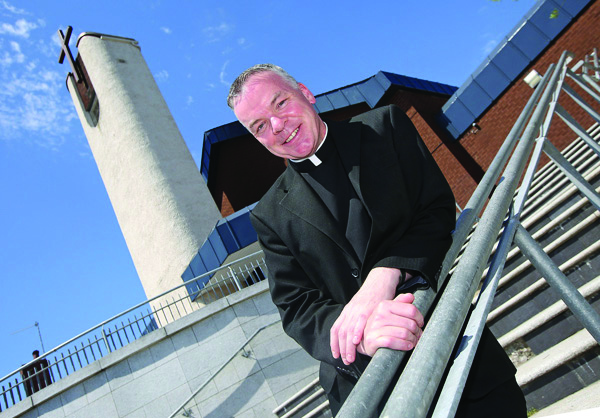 CELEBRATING the silver jubilee anniversary of his ordination, Parish Priest of St Agnes’ Fr Thomas McGlynn, has told the Andersonstown News that he regards West Belfast very much as home.
“I’ve spent over half my life here in West Belfast,” the South Belfast man told us. “My first appointment was at St Paul’s, then Holy Trinity in Turf Lodge.
“I spent ten years in the Royal Victoria Hospital chaplaincy and I’ve been at St Agnes’ almost four years now.”
Fr McGlynn, who is the sole priest in the parish, described the parishioners who attend the church as a “very close-knit community.
“The Andersonstown Road is such a busy one, all the local services are centralised here, it’s almost like a village within the city. The church is very much at the heart of the community and in a physical sense as well, it really does have a central presence here.
“The church is open during the day from 9am until late afternoon. There are always people dropping in and out, whether it’s to do the Stations of the Cross or just to have some peace and quiet from the road. It’s great to see grandparents bringing in their grandchildren to the church. Grandparents play such a big part in their grandchildren’s lives. You can see that special bond between grandparents and grandchildren, they don’t have to be bad cop with them any more,” he laughed.
Fr McGlynn described his role as Parish Priest as being “very intense” at times.
“It’s hard to get away sometimes. There are funerals to arrange, wakes to attend. We have extremely strong links with Holy Child Primary School. I would be archivist for the parish as well as I’ve always had that interest in history and architecture.
“This part of the city was very much developed after World War Two. It was the first church to open after the war in 1949. A lot of new homes were being built during this time, a lot of young married couples were moving in. The building was replaced in 1981 and two years ago the church celebrated its 60th anniversary.”
And Fr McGlynn spoke of his appreciation after parishioners clubbed together to send him on a dream trip to St Petersburg to mark his 25th year in the priesthood. He said that one of the challenges for him when he came to St Agnes’ was to try and reduce the parish debt, which was £290,000 when he took up his role in September 2015.
“We decided on a radical decision at that time which was to close and sell the parish centre. It was losing £30,000 a year and was in need of a lot of upgrading, maintenance and repair. I decided that this was a way we could address the debt and I can happily say we are now debt free – the first time this has happened since 1949. To be honest, I just didn’t think we would have got it done so quickly.
“The parishioners have always been very supportive at every stage and they actually clapped when I read the financial statement out. I have always kept them fully appraised.”
Asked what his plans are for the next 25 years, Fr McGlynn replied: “I hope I will be here in St Agnes’ for some time to come. I’ve been very happy here. I have been very, very happy in all of the four appointments that I have had. This has been my first time in charge of a parish. It felt a little bit daunting to be in complete charge on my own as we are dealing with declining numbers of priests, but the challenge is always to deliver the best service to our parishioners.
“While vocations here in Ireland may be low at the moment, attendance here in this parish is very good.
“People still need the church, they may need it in a slightly different way than they needed it in the past, but they still need it. People still want to have their children baptised, most people still opt for church weddings and burials – we have to be as adaptable as we can.
“I told the parishioners during the recent celebrations for my silver anniversary that I have no regrets, I have never felt sorry with the decision that I made by joining the priesthood. I would recommend the priesthood to anyone.
“I have never felt or wished that I could have done anything else in life. I’m very much looking forward to the next 25 years.”