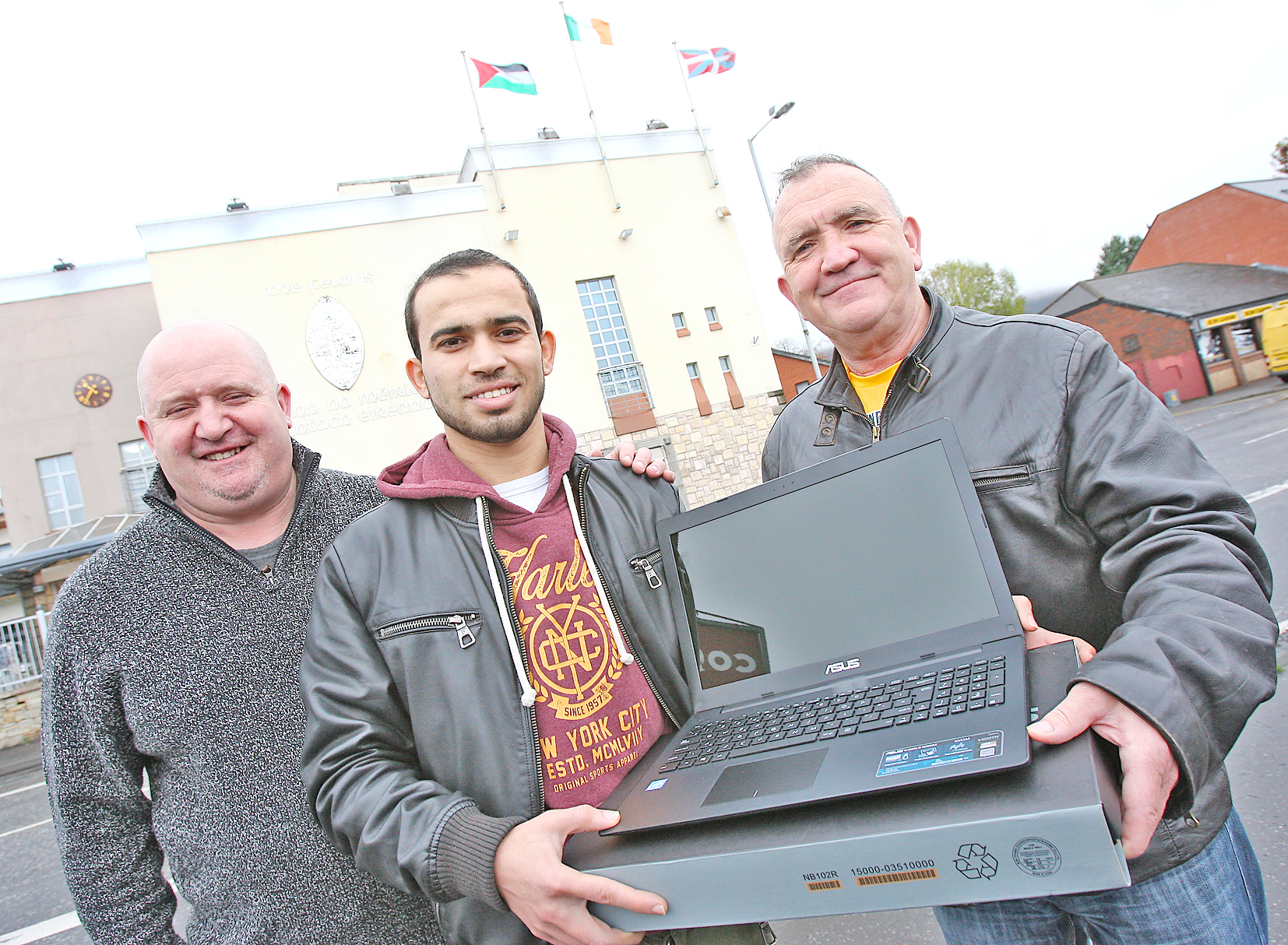 Gerry Scullion of the Felons presents Mustafa Afana from Palestine with a laptop for use in his studies at Queen’s. Looking on is local photographer John Mallon

Well-known Belfast photographer John Mallon has opened his home to a student from Gaza.

Mustafa Afana, who is 25, is currently studying for a Masters Degree in Translation at Queen’s University.

As well as being grateful to John for his generosity, Mustafa has been overwhelmed by the generosity of others, especially that of the Felons Club, who have gifted him a laptop to enable him to carry on with his studies.

Mustafa said: “I would like to thank the Felons club for this wonderful gift, they really support the Palestinian people and our cause. This laptop is going to help me a lot with my studies, which will enable me to have a better life.”

John says Mustafa has found it easy fitting in, said John, speaking at the Felons.

“He has made a lot of friends here and the support has been overwhelming,” he said. “I really have to praise the Felons, over the years they have been so supportive of the Palestinian people. The flag flies outside here 365 days a year and they’ve hosted some great events here. As soon as I spoke to the committee about Mustafa there wasn’t a moment’s hesitation, they just wanted to know what they could do to help him. When I mentioned he needed a laptop they got him one right away.

“Gerry Scullion was the person I dealt with in the club, he’s the secretary. He along with the other committee members have been great supporters of the Palestinian people. I can’t praise them enough.”

“Everyone has been so kind to Mustafa, the Marrowbone Community Association on the Oldpark Road have practically adopted him, they’ve given him a set of keys so that he can go in and use the computers whenever he wants so he can get his assignments done and the Gaza Toy Drive donated a bike to him. Everyone has been so nice.”

John got to know Mustafa during his time in Gaza when he, along with others, delivered aid.

“Mustafa was our translator when we were moving around Gaza, we witnessed many scenes of devastation,” he said. “Only for him and his help things would have been very hard for us.”

Mustafa has faced great hardships in his short life, his brother was only 22 years old when the Israelis bombed a Palestinian police station, his brother along with the fire brigade and other people ran into the building to try and save people, only for it to be bombed again and his brother was killed.

Mustafa added: “I used to work as a fixer with international journalists during the war. One time I was working with a Japanese journalist during the 55-day war last summer. This journalist wanted to go to Rafah the day after an Israeli soldier had been kidnapped. I said it was too risky as Rafah was under siege, but he insisted I bring him. No-one was allowed to get in or out of the place. On our way we noticed only one car in the road, the place was deserted.

“An Israeli drone fired a missile at us. It was a warning, if they had wanted to kill us they could have. The only thing that saved us was the fact that there was TV equipment on the roof of the car and they didn’t want to get themselves in trouble with international governments.

“I lost so many friends back home. In 2008 I lost my brother, three days later my cousin was killed. 40 days before my brother was killed I lost my dearest friend, he was my best friend in the world, he used to stay over in our house all the time. “

“During the last war my uncle lost his house, it was a four-storey house with 35 people living it. They are all homeless now. They are scattered everywhere “

When Mustafa talks about his five-year-old sister his face lights up with love and pride. He describes her as “a gift from God” as she was born 11 months after his brother was killed. He had the honour of choosing his little sister’s name.

“I named her Iman, which means Faith. She means everything to me, I cry because I can’t be with her. I don’t know when I will see my family again, the borders are now closed and once you get out of Gaza you don’t go back. It’s not as easy as saying, ‘I have finished my studies now it’s time to go back home.’

“I am here to obtain a better life for my family. I believe that my family have suffered a lot because of the Israeli occupation. Our living conditions are very poor. If I work here and send them some money it will help them have a decent life. All my little sister wants is her own bedroom with Minnie Mouse bedclothes and nice colours painted on her walls.”

John is very proud of Mustafa and everything he has overcome to get him to this point.

“Mustafa is very successful, he’s the first ever Palestinian to do a Masters in Translation at Queen’s. He just wants a better life. When he got accepted to Queen’s the next hurdle he faced was whether or not he was going to get out of Gaza. He was number 9316 on the list to get out. He’d done work in the past with international journalists and other stuff for the press, that was the only reason he was able to get out. If he hadn’t have got on the bus that day he probably never would have got out, he wouldn’t be here.

“Mustafa is the senior member of his family now and if he can obtain work here he will send money home to them. His other sister is a wonderful artist, I’ve seen her work, we are hoping to exhibit some of it here in the Felons at some stage to hopefully raise some money for the family.”